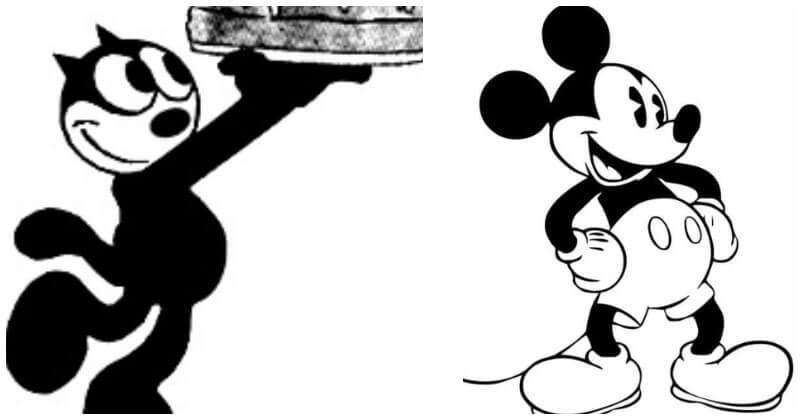 Can you tell us your favorite Disney character right now? Without a doubt and without hesitation, Mickey Mouse is mine. This iconic figure is the one who began it all and placed Disney Studios on the map. Mickey was followed by some of the most well-known and iconic cartoon characters ever created by a single company. But can you name the oldest Disney character? It’s not Oswald the Lucky Rabbit, because, before him, there was a little cat named Julius. Therefore, Julius the Cat becomes Disney’s first anthropomorphic lead character, who would go down in history as the first to do it all. Source: Julius the Cat in Puss in Boots

Many fans remember that Walt’s first cartoons were created when he founded the Laugh-O-Gram Film Company in May of 1922. Here Walt and his fledging staff produced 10 cartoon shorts before going bankrupt. As to keep the process easy and also give Disney a signature style, many of the characters are featured many times in each animation. And cat character is one of them. This character appeared in “Little Red Riding Hood”, “Puss in Boots” (1992), and in Charles Perrault’s book. It is the first time a cat like Julius has appeared in the Disney universe; whether he was named Julius or not, we’ll never know because he was never given a specific name. However, the Laugh-O-Gram cat has a design that is nearly identical to Julius’.

It wasn’t until Cinderella that the cat really became a constant feature of the cartoons, and he would go on to become a promising character for Walt’s new idea, The Alice Comedies. Source: Julius the Cat and others from the Alice Comedies

The Alice Comedies were the vehicle Disney rode to becoming the eminent pioneer in animation. This is a series of short films with both animation and live-action actors. Inspired by the “Alice in Wonderland” books by Lewis Carroll, Walt pulled together a team to produce these shorts. They released their first short in 1923 with a little girl named Virginia Davis who played Alice. Source: Alice and Julius in the Alice Comedies.

In the Alice Comedies, Julius played Alice’s sidekick. He made the series more funny and interesting. In 1923, he made an uncredited appearance in the first chapter of the series, “Alice’s Wonderland.” In 1924’s “Alice’s Spooky Adventure,” he began to emerge as a more important recurring character. In 1925, he starred in the film “Alice’s Egg Plant,” in which he was given the moniker Julius for the rest of his life. After that, He then went on to appear in film sequels in 1926 and 1927. Julius the Cat and Pete the Cat It’s classic humor to compare two characters against each other because Pete’s appearance would take form after meeting Julius.

On February 15, 1925, Disney published “Alice Solves a Puzzle,” which is the first time we ever see the famed villain Bootleg Pete. He looks like an anthropomorphic cat that is introduced as “a collector of rare cross word puzzles”. When Alice refuses to give up the puzzle, she is pursued by Pete until her cat Julius pushes her over a lighthouse. Pete makes his official debut in this episode.

Although Pete initially debuted as a cat, he has also been portrayed as a bear, a “Rat,” or other animals over the years. Pete isn’t seen again until the Oswald cartoons, but his connection to Julius is significant since Pete is the longest-running Disney character of all time.

# Julius the Cat and Felix the Cat Julius has a striking similarity to Felix the Cat, one of the most popular children’s cartoon characters of the early twentieth century. Felix was developed by Pat Sullivan, and M.J Winkler Pictures published his cartoons. He was well-known during the silent film era, but as cartoons to begin using sounds, synchronized music, and voices, his character began to fade. Felix was phased out by 1930 after Mickey Mouse had captured the public’s interest. # The Legacy of Julius the Cat on the Walt Disney Company Even today, this strange black and white cat has affected a lot to the Walt Disney Company. He is the driving force behind the main anthropomorphic animal characters, including Mickey Mouse, Minnie Mouse, Donald Duck, Daisy Duck, Goofy, and Pluto. Thanks to his humorous appeal, Julius was also the figure that saved “Alice Comedies” from being pulled from theaters. And Walt would not have continued to produce Mickey Mouse if it hadn’t been for “Alice Comedies”. The funny cat is also the first to introduce us to two important characters Pete and Mickey mouse.

Finally, Julius is the first designated lead animation character developed by Walt and his team. In Disney’s California Adventure, a gift shop is named for him Julius Katz and Sons.