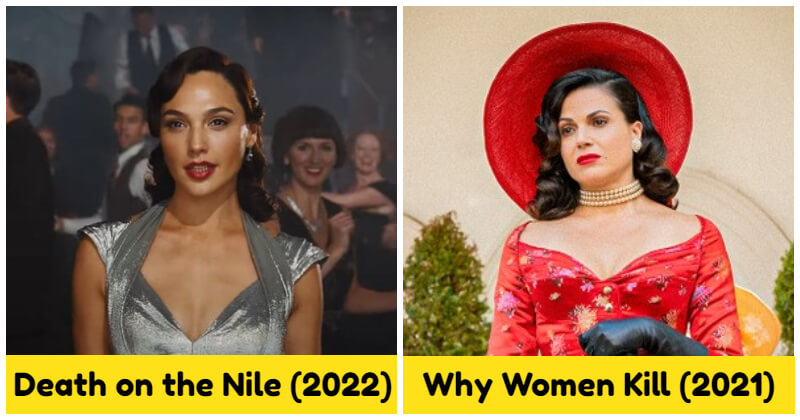 The Oscar is one of the most awaited events praising the most talented professionals in the film industry. There are 24 categories and one of them is the award for the Best Costume Design. The nominees for the category are chosen by the Costume Designers and Art Director members of the Academy of Motion Picture Arts and Sciences.

It must be hard for them to choose the winner. Filmmakers make a great effort to create extraordinary outfits to express the characters’ personalities and reflect the spirit of the movie. Some costumes become the fashion inspiration, and some have sparked international manhunts.

Below are 9 gorgeous movie costumes that deserve an Oscar. Source: Death on the Nile

The breathtaking costumes in “Death on the Nile” were created by Oscar-nominee Paco Delgado and his team. They spent a year studying the fashion of the 1930s and producing about 150 outfits. The sophisticated outfits make the characters stand out. For example, in the opening scene, Linnet enters a jazz club in London in a stunning silver evening gown that conveys her wealth. Underneath the spotlights on the dance floor, the dress most definitely shone brightly whilst conveying elegance. Linnet was put on a peach-colored dress embroidered with white cranes to emphasize her contradictory character. Source: Death on the Nile Nightmare Alley is a cinematic masterpiece enhanced by its stunning colors, enchanting sets, legendary cast, and flawless costumes. Costume designer Luis Sequeira, previously nominated for an Academy Award for his work on “The Shape of Water” shared that he did an immense amount of research and pulled all wonderful vintage clothing to create a world with stunning outfits. For example, in the scene, when Ritter opens up the office door in the beautiful satin and olive green skirt and that makes many viewers immediately say “wow” The award-winning costume designer admits that dressing Kristen Stewart as Princess Diana for Pablo Larraín’s Spencer was unlike anything else she has done in her impressive 22-year career. In a scene where Diano visits the church, the actress wears a red coat and a black-veiled hat. In the official first-look photo released by HBO Max, the characters’ signature styles are given a 2021 twist. Parker playing Carrie Bradshaw is wearing a gingham Norma Karmali skirt, and Celine shoes. Nixon’s character, Miranda Hobbes, looked like a high-flying lawyer, she always has been in white wide-leg trousers by Vince and a gingham shirt. Charlotte, played by Davis, carries her micro Lady Dior handbag and wearing an off-the-shoulder Carolina Herrera blouse, tucked into a black pencil skirt. On another day of shooting “And Just Like That” in the NoHo area of New York City, Parker wore a Carolina Herrera pink ruffled-hem shirt midi dress cinched at the waist with a vintage belt. “Yellowjackets” is about wildly talented high school girls’ soccer players descending into savage clans after their plane crashes in the remote northern wilderness. The costumes provide some clues about their personalities which they tried to hide. For example, the costume designer creates a feline motif for the team manager, Misty who watches a rat drown in a swimming pool. The character wears dorky kitty and cheetah sweatshirts. West Side Story, a classic musical for over 60 years, has come back with a colorful and more authentic film adaptation in 2021. Costume designer Paul Tazewell has done a remarkable job of recreating 1957 New York fashion for the diverse cast. Each character wears genuine vintage or reproduction 1950s clothing that is eye candy for vintage enthusiasts. In the second season of “Why Women Kill”, Marс Cherry, the scriptwriter, and author of Desperate Housewives, focused just on one storyline, taking place in 1949 in the suburbs of Los Angeles so characters wear the popular 1940s outfits. Especially, three women living in different periods must cope with infidelity and betrayal in their marriages but their wardrobes serve as constant inspiration for dressing with cheerful confidence. Source: The Many Saints of Newark

The plot of the movie is set in the 1960s and 1970s, in Newark, New Jersey and it is about the tensions between African-American and Italian-American communities. Each character put on elegant and classy costumes. For example, young Tony Soprano wears a denim jacket with a classic collar and buttons and that makes him more active. Costume designer Morgan creates a world that reflects the 1980s. Morgan logged hundreds of hours researching costumes from 1980s wrestling. Her goal was to keep the costumes rooted in reality, so she drew from Seventeen magazine and catalogs from J.C. she and her team handled the task successfully when creating the outfits full of neon colors.