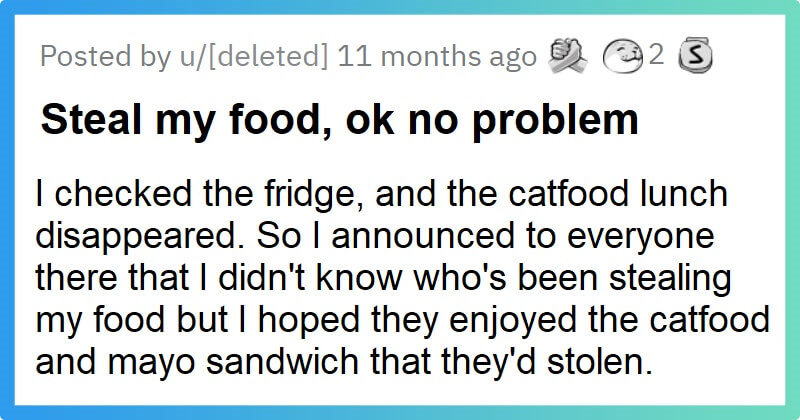 r/PettyRevenge is an online community on Reddit that allows people to share their stories of payback in the most appropriate but petty way possible. Recently, a man shared his petty revenge on this subreddit, and his post has gone viral with nearly 5000 votes and comments.

The man shared that he worked on a construction site while waiting for his enlistment date. Unfortunately, someone stole his lunch from the fridge many times. He tried to catch them but to no avail. Knowing that this person would again attempt to take his lunch, the man decided to mix cat food, mayonnaise, and sweetcorn together and brought it to work. Source: KingFoodMart (not the actual photo)

“The following Monday I got out a tin of cat food, mayonnaise, and sweetcorn and mixed it all together for what looked like tuna mayo sandwich, placed that in the fridge, and kept my lunch in an icebox in the van,” he wrote.

“Come lunchtime and I come in with my lunch and check the fridge, low and behold the catfood lunch has disappeared. So I announce to everyone there that I didn’t know who’s been stealing my food but I hope they enjoyed the cat food and mayo sandwich that they’d stolen.”

The plan worked perfectly. The person who stole his lunch soon realized what was happening and immediately went to the toilet. “A fat old guy goes green and shoots to the toilet. Everyone else was laughing their asses off at him and saying it’s been happening for months and nobody knew who it was,” he said. Source: Depositphotos (not the actual photo)

The man hoped that the fat guy learned his lesson that “there’s always someone more devious than you.”

After reading this post, Reddit users quickly replied with their own stories. We have collected the most ridiculous, cunning, and hilarious ones. These stories show why you should never mess with someone as they will take revenge on you, no matter what it takes.

“At my previous job, there was a chronic lunch thief. One day, they decided to steal the lunch of an 8-month pregnant woman. She literally hunted down the person by looking in everyone’s trash cans at their desks. She found the perp and turned them in to HR. It was… intense.” “Was the boss displeased with her or with you? Because from other stories I’ve read here it could easily go either way,” a Redditor called revchewie replied.

The user Elan00 said, “My lunch wasn’t stolen but my lunchbox was and I’m 100% sure it was the Head of HR. She didn’t have it before, but when I lost it she magically had one the same as mine. I know it’s mine coz it’s a set and she was just bringing the one pc I use. I can’t confront her because she’s an evil woman. I’m pretty sure she’ll do something to me if I embarrass her. Yea it’s been 7years and I still hate that it happened.”

“At university food was constantly getting taken from the communal fridge. One guy even had his insulin stolen, but it was mainly our milk that kept disappearing. After a while we discovered the trick to encouraging the thief to look elsewhere – a few drops of green food colouring added to each bottle after opening to turn the milk green, so it looked like it had gone off. No one ever stole our milk again,” the user Brilliant_Koala8564 wrote. Redditor who goes by the name Sarcasamystik shared: “I had someone keep steeling part of my pizza at my old job. I knew someone where I would buy the pizza so I had them cook Carolina reapers under the cheese. Needless to say I found out who had been taking my food that day and it never happened again.”

Reddit user neinnein79 said: “I worked for a woman who I found out from a co worker was allowed to quit from a previous job because she constantly stoled people’s food from the fridge. There was so many complaints that they installed a camera. When she was confronted by her boss they gave her 2 options be fired or quit.”

The person going by the name JosKarith wrote: “The one time I had to deal with a food thief I used the fact that I know how to make a chilli blend that is a slow burn that’ll keep burning your mouth 15 mins after you’ve stopped eating. And then 3 hours later the pain _really_ starts when it hits your lower digestive tract.”