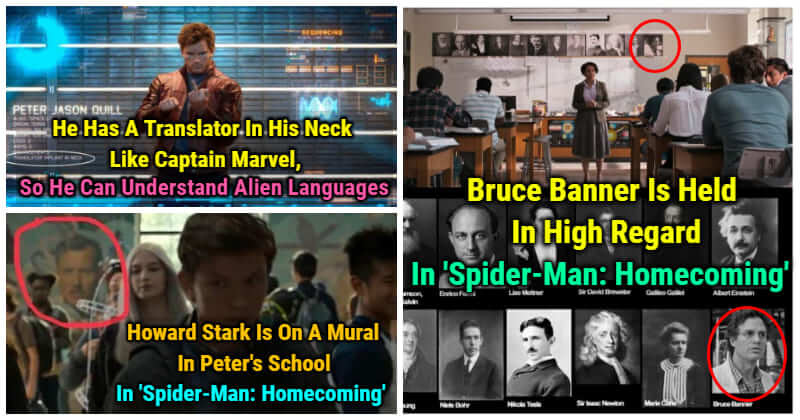 In MCU films, there are many details, many of which are right in the center of what’s going on at any one time. Then there are the intricacies in a scene’s backdrop, which are often more difficult to perceive. They are, nevertheless, typically as vital as, if not more important than, the action in the foreground. If anything like this displays, it’s always a good idea to hit the stop button.

Most films have one or two of these moments, but the MCU appears to have quite a few. You’ll notice something spectacular in the background when you pause a scene in a Marvel movie. This collection of people’s favorite halted moments from the MovieDetails subreddit. Below are the 18 exquisite details in Marvel movies that you may miss before. In Spider-Man: Homecoming, Bruce Banner’s face is alongside the other “famous scientists” on the wall of Peter Parker’s physics class. In Captain America: Civil War (2016), In the scene with Steve watching the news, you can see to his right the drawing of the monkey in the Captain America suit he drew in the first Captain America movie (2011) regarding how he thinks the public views him in both films. In Ant-Man (2015) a shot of Thor’s circle symbol left in the grass upon returning to Asgard at the end of Avengers: Age of Ultron (2015) can be seen.

4.The Reasons Why Peter Can Understand Alien Languagues

In Guardians of the Galaxy, when Peter Quill is arrested, it shows that he has a translator in his neck, which is how he can speak to different alien species.

5. Howard Stark Is On A Commemorative Wall In Peter’s School

In Spider-Man Homecoming (2017) Howard Stark can be seen painted on a mural celebrating great scientists and inventors. In Iron Man 2 (2010), we see that Director Fury was considering Black Panther for the Avengers Initiative because of the circle over Wakanda, his homeland, in Africa.

7. Wasp’s Portal Is Wasp-Sized In ‘Endgame’

In Avengers Endgame’s portals scene, Doctor Strange creates a tiny portal instead of a full-sized portal for the Wasp to pass through.

8. War Machine’s Armor Displays How Many Ultron Have Died

In Captain America: Civil War, if you look closely on the right side of War Machine’s chest piece, you can see tally marks of kills in the form of tiny Ultron heads, referencing the battle for Sokovia in Age of Ultron.

9. There’s A Blemish In The Bifrost In Thor: The Dark World (2013), you can see a big crack in the Bifrost bridge. The Asgardians repaired it after it was broken in Thor (2011).

10. The Grandmaster’s Craft Appears In The Asgardian Shipwreck In Avengers: Infinity War’s opening scene showing the drifting wreckage of the Asgardian rescue ship, you can see the Grandmaster’s “leisure vessel” that Thor and Valkyrie stole to escape from Sakaar. In Guardians of the Galaxy, each of the stripes on a character’s leg is a crime they’ve committed. Black is murder, etc. The grey one on Rocket is “indecent exposure.” In Spider-Man: Homecoming (2017), Peter’s heart-rate jumps from 84 to 93 when getting embarrassed by his impression of Thor.

In Iron Man 2, we see the MARK I labeled as a reconstruction because the original was never recovered by Stark. In Thor, the God of Thunder has a fake New York driver’s license with the name “Donald Blake,” who was the human host for Thor’s spirit in the original comics. Additionally, the state motto shown on the license is “Excelsior,” which is also the catchphrase of Stan Lee. In Spider-Man: Homecoming (2017), the uploader of the Amazing Man-Spider” video is RocketRobinson67. This is likely a reference to Robbie Robertson, who debuted in The Amazing Spider-Man in 1967. Robbie was an employee at The Daily Bugle in the original comics. In Spider-Man Far From Home (2019) the comments on Flash’s Instagram stream are from various bots, suggesting Flash buys his followers.

17. Hulk’s Glasses Include Fingerprints All Over Them In Avengers Endgame: Prof. Hulk can be seen wearing glasses which is nicely detailed with fingerprints that obviously would exist on glossy black frames, probably my favorite little detail from the movie. A little joke in the Guardians of the Galaxy Vol. 2 credits.