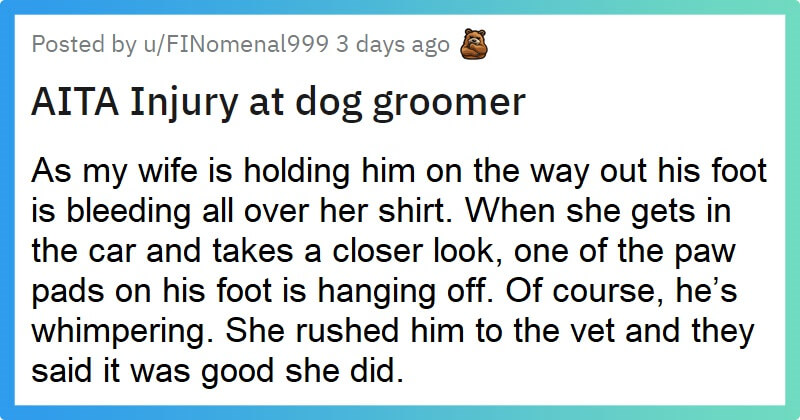 Grooming dogs can be messy, difficult, downright unpleasant, and dangerous. For this reason, many owners choose to take their dogs to groomers. When regularly grooming moving animals like dogs with sharp equipment, there are some common dog grooming injuries that can occur. Even experienced pet groomers can’t avoid injuries and accidents involving our canine friends.

However, when accidents happen, honesty is the best policy. If a dog is injured while you are grooming it, tell the owner. The discussions can be difficult, but it is important to have them. You need to tell the truth and don’t blame for anything because you are a professional groomer. However, a dog groomer didn’t care about it and didn’t apply it to her situation. She injured a client’s dog and acted as if it was not a big problem. Her action and attitude made the dog owner angry. The owner then went on Reddit to ask if he was wrong for asking for his money back and forcing the groomer to pay the vet bill. Scroll down to see the details of the story!

On the popular subreddit r/AmItheAsshole, the owner who goes by the name u/FINomenal999 shared his wife took their dog to get his hair cut at a groomer. They had gone to this groomer since they got their dog. Despite being a small salon in their town, they were satisfied with the shop owner and her service.

“Yesterday my wife took our dog to get his hair cut at the groomer. He’s a one-year-old, 5-pound morkie. We’ve gone to this groomer since we got him and we have family that takes their dogs there as well. She’s always been great (it’s a small business in a small town),” the husband wrote. Visits to the groomer in the past were great until this time, “a new employee checked him in and cut his hair, not the owner who has always done it. The appointments are one hour but usually only take 45 minutes.”

Nearly two hours later, his wife came to pick up the dog and spotted the dog injured. The new groomer said that she nicked two of his legs because he wasn’t holding still. She acted like the wound was not serious, so his wife paid the bill and got the dog home. “After she pays the new woman mentions that she nicked two of his legs Bc he wasn’t holding still. It’s true that he can be squirmy, but he has gotten used to the haircut process and we haven’t had any issues since his very first time so this was odd. She goes back to get him and my wife hears the new woman make a comment “I hope it stops bleeding.”

However, when she got in the car and took a closer look, one of the paw pads on his foot was hanging off. She rushed him to the vet, where he ended up needing stitches, antibiotics, and pain meds.

“As my wife is holding him on the way out his foot is bleeding all over her shirt. When she gets in the car and takes a closer look, one of the paw pads on his foot is hanging off. Of course, he’s whimpering. She rushed him to the vet and they said it was good she did. He ended up needing stitches (sedated him during this process), antibiotics, and pain meds. The vet said they could actually see one of his tendons.” This groomer did not even tell her honestly what happened, saying it was “just a little nick”! She lied so she wouldn’t get in trouble. The wife even spotted that the groomer only cut hair on half his face and didn’t blow off any hair while she paid for all of them. That is the reason why she and her husband decided to ask for their money back and for the groomer to foot the $350 vet bill.

After reading the post, Redditors quickly responded. Most of them sided with the OP and his wife and agreed that their decision was completely reasonable. They also slammed the groomer for her bad action. Some even advised the dog owners to sue her for the vet bill. All images are for illustrative purposes only.