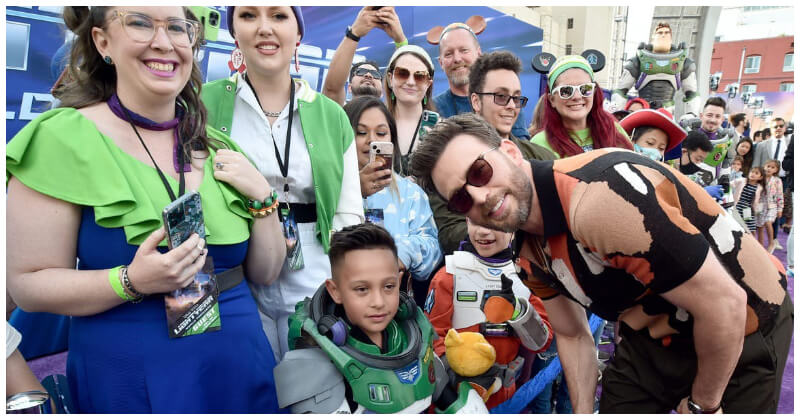 “Toy Story” Franchise is one of the highest-grossing franchises worldwide earning over 3 billion dollars in revenue. Spanning more than two decades, the Toy Story series became a part of our childhoods and many of us are happy to revisit all the characters. After four “Toy Story” films, audiences are seeing a new version of Buzz Lightyear, one of the main characters, in Pixar’s latest movie, Lightyear, on June 17. The movie portrays Buzz Lightyear, a space ranger embarking on an intergalactic adventure, leading a team of recruits in a fight against invaders.

Below are some photos of the “Lightyear” cast at the event.

#1 Chris Evans takes over the role of Buzz Lightyear The “Toy Story” version of Buzz Lightyear was voiced by Tim Allen, but now Captain America Chris Evans takes over the role. The actor shared that he initially felt intimidated to say Buzz’s catchphrase but he and the creative team eventually found a way to do his unique interpretation. Uzo Aduba is voicing Alisha Hawthorne. During a press junket about “Lightyear,” producer Gayle Susman described Hawthorne (via Murphy’s Universe) as “the emotional anchor” of the movie’s first act. She’s commanding and compassionate, a straight shooter who cares about living a good life.

#3 Keke Palmer is in the role of Alisha’s granddaughter, Izzy Hawthorne Keke Palmer is set to voice Izzy Hawthorne is Alicia’s granddaughter who has a striking resemblance to her grandmother. The character has spunk, courage but it’s not sure that she can live up to the family name. “Orange Is the New Black” star Dale Soules will voice Darby Steel. Producer Galyn Susman shared that the character is the classic tough curmudgeon with a record. She’s handy, inventive, and extremely salty. Commander Burnside is voiced by Isiah Whitlock Jr. He’s had roles in TV shows like “Atlanta”, “Elementary”, “Bojack Horseman” and movies like “Cars 3” and “Da 5 Bloods”. Peter Sohn, an animator, and director for Pixar, voices Buzz’s robotic kitten, Sox. He has lent his voice to a number of other Pixar projects, like Monsters University” and “WALL-E”. He was a production artist on “Toy Story 3” and worked as an animator on “Ratatouille” and “The Incredibles”. James Brolin has been tapped to voice Zug, the villain of “Lightyear”. Emperor Zurg is considered Buzz Lightyear’s arch-nemesis and even serves as a villain in “Toy Story 2”. “Lightyear” may introduce the backstory behind how the toy villain came to be. James Brolin has been tapped to voice Zug, the villain of “Lightyear”. Emperor Zurg is considered Buzz Lightyear’s arch-nemesis and even serves as a villain in “Toy Story 2”. “Lightyear” may introduce the backstory behind how the toy villain came to be.

#9 Some special attend the even Marvel star Xochitl Gomez, who plays America Chavez in “Doctor Strange 2,” was also at the premiere.