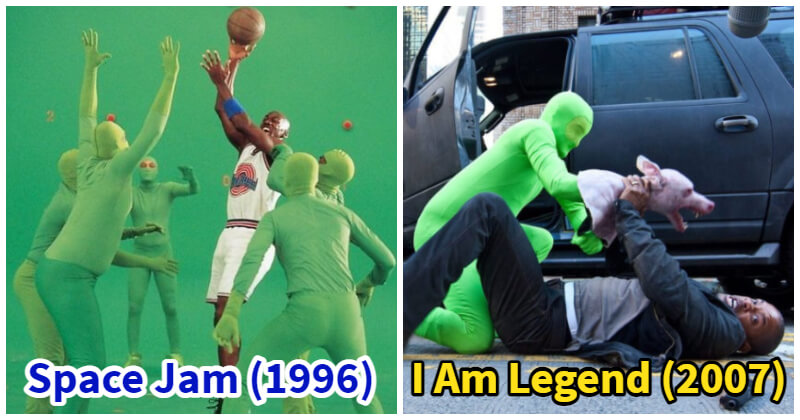 Movie magic has gone a long way from strings and optical illusions. Thanks to technological advances, CGIs, and makeup, special effects have become very convincing.

Green screens are frequently device used for CGIs in filming. While utilizing one as a background or part of a set is the most common method, there are a few more options. The actor can wear a green bodysuit, the props can be painted green, or sometimes it can just be a green sheet.

By using them creatively, directors can create many amazing special effects on the movie screen. They can bring mythical creatures to life, and make actors and people do impossible things, like flying. They can recreate fictional cities, planets, and worlds even.

Sometimes green screen effects are so well-done that you don’t even wonder how they accomplished some of these effects. So, here are 25 behind-the-scene shots that show you how the green screen is the real magic in a movie. The dragons in Game of Thrones are all special effect wonders. When you remove those special effects, you get something like this. Emilia Clarke made dragon petting appear believable, even though she was caressing a cushion.

#2 Harry Potter And The Half-Blood Prince Without that green screen magic, the Harry Potter world of magic would be lifeless. The Quidditch sequences, particularly in later films, are likely to suffer the most. The contrast between these two photographs is like night and day.

#3 Harry Potter And The Order Of The Phoenix It takes a lot of effort to make the Harry Potter world appear as magical as it is in the book. Even with the smallest spell, such as having a book appear to float into position, needs the use of an invisible hand or two. Of course, the movie Titanic was shot on a sound stage. It’s difficult to make a film like that aboard a sinking ship. However, it appears that more of the set from the famed “I’m flying” sequence was green-screened than one might assume. In the first Avengers film, the Hulk was the only fully CGI primary character. Since then, they’ve refined motion capture technology and green screen. Not that the film’s end output was poor. Regardless, you have to realize that watching this without the effects is ludicrous. In The Hunger Games, we see the game creators, the individuals who run the titular games in order to murder the tributes. Their high-tech boards are, in fact, merely green desks. It makes you question what the director instructed them to do to make it appear authentic. While the majority of the film was shot on location, several scenes were also shot on a sound stage. Doing all those automobile stunts without a green screen would be even riskier. It looks like they are meant to collide with this one. The green screen was used extensively in the original Space Jam. When you consider what Michael Jordan was working with, you can forgive any flaws in his performance. Except for himself, Bill Murray, and Wayne Knight, everything was green. And the last two actors are only featured briefly in the animated segments of the film.

#9 The Wolf Of Wall Street

The Wolf of Wall Street was shot on location. As it turns out, the majority of the phony things in the film are merely for effect. It’s just less expensive than renting a boat, at least in the circumstances shown in the video. I Am Legend differed from earlier renditions of the narrative in a key way. One such incident occurred when he was assaulted by vampire hounds. While they’re more plainly computer-created to a seasoned audience, it’s entertaining to see what things looked like before the special effects were applied.

#11 Guardians Of The Galaxy Sean Gunn is credited with creating Rocket Raccoon’s motion capture in the Guardians of the Galaxy movie. Despite the raccoon’s small size, Sean does an excellent job of portraying Rocket’s motions. But witnessing Dave Bautista pet an adult guy dressed in a green costume is tough not to giggle at. When you have a team of fish people in your film, it will be difficult to make them seem realistic, or at least menacing, without CGI. Many of the lower-level crew workers in Dead Man’s Chest were wearing motion-capture suits. Bill Nighy, who plays Davy Jones, wore one of those outfits as well as some extra makeup to aid in the procedure. After all, he did have a real octopus for a beard. Have you ever wondered how the characters in The Matrix pull off such daring stunts? After all, in his famed evading gunshot moment, Keanu Reeves executes a full 180-degree spin on his back at one point. When filming on a green screen, you can take some liberties that you would not be able to take otherwise. As an example, have someone dressed in suits set up boards for your performers to lean upon. Almost every Marvel film is shot on a large set. Those same films also make extensive use of motion capture. With only the helmets of their famed armors on, RDJ and Don Cheadle appear a little goofy. The X-Men film franchise is well-known for its amazing effects. You’ll need a lot to bring those mutant abilities to life. During the last fight at the White House in Days of Future Past, the background was visibly green-screened. Then there’s the rebar and cables required for Magneto to pull Logan into the air. The Robocop remake attempted to be far more serious than the original. It got the impression of a gritty, sci-fi future correct by using both green screen and motion capture.

#17 Beauty And The Beast It’s an age-old story! A joke regarding the creation of this film goes something like this: Emma Watson earned an Oscar for her performance as Belle in the live-action rendition of Beauty and the Beast. And that would be because of how the Beast appeared without any special effects. These motion capture costumes are already ridiculous, but the addition of pumps makes them much more ridiculous. This effect demonstrates how only a few panels of green screen are required to complete the task. The whole backdrop for this wide shot was digitally modified to include a bay. It appears a little more phony than usual, but Boardwalk Empire only had a TV budget, not a full-featured budget. In Kill Bill Vol. 1, the Bride appears a touch floaty during the major clash with the Crazy 88s. That’s because she’s suspended from wires for the stunts. Nonetheless, Uma Thurman was responsible for most of her stunts.

#20 Dawn Of The Planet Of The Apes We all know that the apes in the Planet of the Apes movies aren’t genuine, but rather humans. But you never truly consider what they look like before the effects. Andy Serkis is a virtuoso of motion capture, yet he looks ridiculous.

How much of the 2014 Godzilla did you believe was real? Because the actors are the only solution. But it makes sense. Filming on the Golden Gate Bridge would be too costly. And there aren’t any real-life huge lizards with atomic breath roaming about.

A lot more of 300 was shot on a green screen than you may think. Xerxes is meant to be speaking to his subjects here. However, there are no subjects to prostrate before him.

#23 The Chronicles Of Narnia: The Lion, The Witch, And The Wardrobe The Chronicles of Narnia is an excellent fantasy series. But there have to be some amazing effects with the huge landscapes, wintry and spring woods, and talking animals. This one depicts Lucy and Susan riding on Aslan to the last battle. With all the VFX removed, seeing Henry Cavill soar about as Superman looks totally absurd. He’s wired up and hovering in a green room, and he’s not even wearing a cape! In the DC Extended Universe, the Superman cape is entirely computer-produced. The film Life of Pi takes place entirely on the open sea. Of course, filming there would be difficult and risky, therefore the film was shot on a set. While part of the water was real, the stunning surroundings and, of course, the creatures were all computer-created.