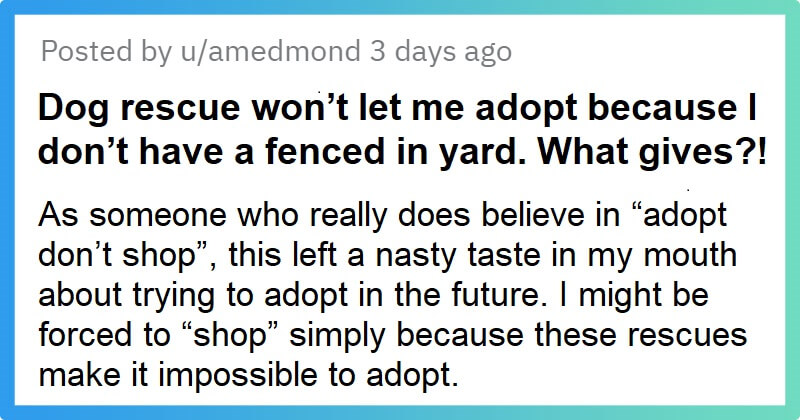 That’s what happened to a dog owner who applied for a dog from a local rescue. The rescue said that he was a great candidate for the dog, but they refused him because he didn’t have a fenced-in yard. He just didn’t understand why they did that while the most important thing was to help the dog have a loving home with a great owner.

On the popular subreddit r/dog, the owner who goes by the user u/amedmond wrote: “I just don’t understand it. How can they say “adopt don’t shop” but then bar people from adopting out their dogs based on their stupid requirements? Do you want the dogs to go to loving homes or not?? I recently applied for a dog from a local rescue and they said that I was a great candidate for the dog EXCEPT I don’t have a fenced-in yard. As in the sole factor in rejecting me is the lack of fenced-in yard.” He tried to convince them that the dog would get adequate physical activity despite not having a fenced-in yard.

“Thank you for your swift response! May I ask why not having a fenced-in yard is a deal-breaker for Queenie? I didn’t see that mentioned in her bio so I didn’t think it would be an issue.

My apartment building is entirely indoors (indoor hallways) so there wouldn’t be any issues with escaping if that’s a concern. My current dog is very high energy and we go outside 4x a day rain or shine, not including the walks we go on twice a day at minimum. My apartment is open concept and spacious (760 square feet) and has been large enough to accommodate 3 dogs when I was doing dog boarding, with enough room for them to run/play freely. Whenever I keep my parents’ dog who is 64 pounds, she also has plenty of room to play and roam. There is a fenced-in dog park open 24/7 and within walking distance from my apartment (a half-mile/10-minute walk). The walks I take my dog on are 30 minutes at a minimum and naturally pass by the dog park on our route, so there would be no problem with taking Queenie to the dog park multiple times a day to get off-leash exercise. I live a very active lifestyle and Queenie would not experience any insufficiency of physical activity under my care.”

Although he tried his best to contest this, they still refused. He wrote, “As someone who really does believe in “adopt don’t shop”, this left a nasty taste in my mouth about trying to adopt in the future. I might be forced to “shop” simply because these rescues make it impossible to adopt.”

Feeling upset and uncomfortable, the owner went on Reddit to ask for their opinions, and Redditors were divided. Many people sided with the rescue and pointed out they were just trying to do what is right for the dog in this instance. However, others agreed with the dog owner. They think that having a fenced-in yard does not guarantee a quality home, a capable owner, or a good life for the dog. Guy Goes Out For A Professional Photoshoot With His Cat, Comes Back With A Bunch Of Engagement Photos