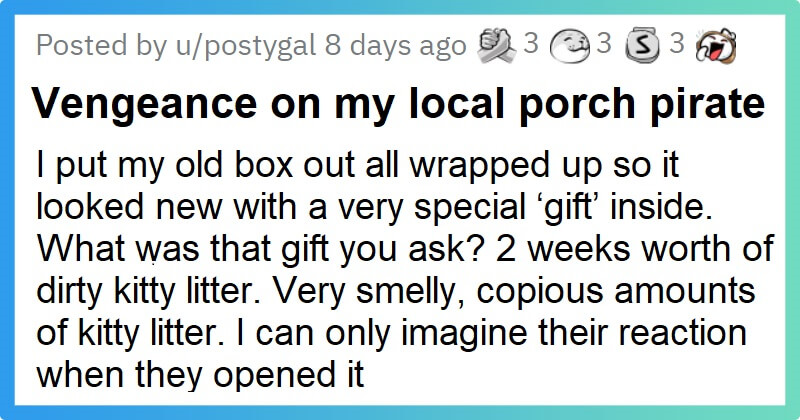 If someone steals another person’s food, they won’t stop there. That’s the reason when a man lost his food many times, he decided to do something to stop it and take revenge on the thief.

Taking to the subreddit r/pettyrevenge, the man going by the user u/postygal shared how he avenged the thief who stole his food. We have to warn you that the revenge plan is very dirty and smelly.

The man said that he is not good at cooking, so he uses a weekly meal delivery service. With this service, he gets his new boxes of food and leaves the old boxes out on his doorstep to be collected. Sadly, someone has stolen his food, leading him to replace the lost food with cheap cereal. He wrote, “I use a weekly meal delivery service, literacy for food as I’m the world’s worst cook and have little desire to improve my non-existent skills. With this service, you get your new boxes of food and leave your old box out on your doorstep to be collected. For the past two weeks someone has been stealing the new boxes. Breakfast, lunch dinner for the whole week is gone and I can only afford to replace the lost food with cheap cereal.”

He couldn’t bear losing food, so he decided to take revenge on the thief. “I put my old box out all wrapped up so it looked new with a very special ‘gift’ inside. What was that gift you ask? 2 weeks worth of dirty kitty litter. Very smelly, copious amounts of kitty litter,” he shared.

Here’s the picture of the box of surprise: Of course, the special gift was stolen. The man was happy to imagine the thief’s reaction when they opened it. After what they did, they deserve to get this ‘gift.’

“I then went to work and when I came back the box was gone. I can only imagine their reaction when they opened it, unwrapped the plastic bags that are supposed to contain food only to be hit in the face with the smell of cat poo.”

Here’s how Redditors reacted to his revenge plan:

In the post’s top comment, which has received 1.8K votes, Redditor HaifaLutin said: “You should have filled the empty spaces with glitter too. That stuff never goes away.” One person shared: “This is why I have cameras around my house. One is right above the front door showing my whole porch.”

“It honestly made me very sad to read that you just ate cereal instead of having the meals you ordered. But I guess there wouldn’t be any recourse to get another sent for free. I would have gone with a camera over this prank though.” A Redditor shared her own story, and it has gained 128 votes.

“I accidentally did this to our neighborhood porch pirate. Accidentally, because I sat it on my porch to take to the trash and someone snatched it before then.

It was a medium size Amazon box that I had put 2 dead mice my cat caught, figured since there was room, I’d scoop the 3 litter boxes, then walked by my bearded dragon’s tank and cleaned that into the box, as well as the dead mealworms and crickets out of their cage, then the topper was an open tube of Halloween blood my kid left out. My neighbor’s ring cam caught the dude opening it, screaming and tossing it awkwardly away only to have some kitty litter and bug carcasses shower him.”

What do you think about this post? Feel free to share your thoughts with us in the comments below!