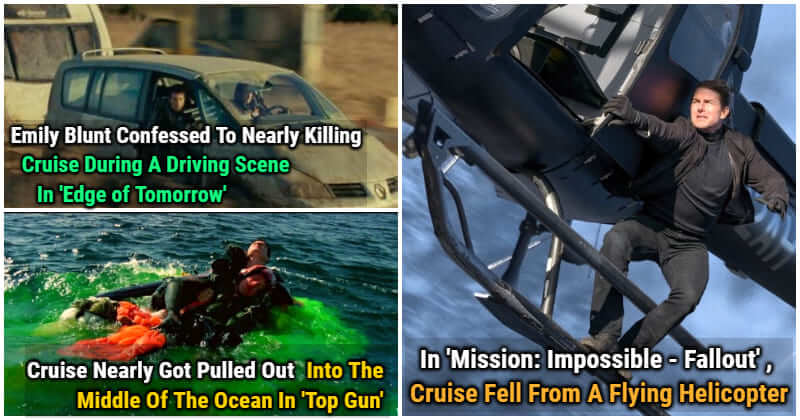 Thankfully, none of Tom Cruise’s injuries resulted in his death. Despite being one of the world’s most famous actors for the past four decades, Cruise insists on performing his stunts. Directors have attempted to persuade Cruise to break from the Mission: Impossible franchise, but he is prepared to take risks. There have been stunts in which the actor has sustained significant injuries and even placed his life on the line. Just because professional stunt coordinators are on hand doesn’t guarantee the stunt is risk-free.

There are six Mission: Impossible films (and counting), as well as Jack Reacher, Oblivion, Edge of Tomorrow, The Last Samurai, and Top Gun. Cruise has scaled the world’s highest skyscraper, dangled from the side of an airbus in mid-flight, and fallen many stories from a soaring helicopter. Cruise may be in his fifties, but the daring thrill-seeker still craves speed. Below are the 13 times  Tom Cruise has nearly faced death while doing his work.

1. In ‘Top Gun’, Cruise Was Pulled Out Into The Middle Of The Ocean

Cruise starred as reckless Navy jet pilot Lieutenant Pete “Maverick” Mitchell in Top Gun, one of the actor’s first big action films. Nobody can forget the heartbreaking incident in which Maverick’s co-pilot and best buddy Goose (Anthony Edwards) is killed after being forced to eject from their plane.

Maverick manages to avoid death and lands safely in the water. On the other hand, Cruise was in danger and nearly died while filming the sequence. The actor’s parachute had filled up with water and was about to take him out into the middle of the ocean.

2. In ‘Edge of Tomorrow’, Emily Blunt Admitted To Nearly Killing Cruise In A Driving Scene In the 2014 science-fiction action film Edge of Tomorrow, Emily Blunt was featured with Cruise. The British actress was driving when she made the near-fatal choice to ignore the senior stuntman’s advice.

During an action sequence, the stunt coordinator urged Blunt to hurry up. On the other hand, Cruise believed that the actress was going too quickly and that she should instead slow down.

3. In ‘Mission: Impossible – Fallout’ , Cruise Fell From A Flying Helicopter Ethan Hunt, played by Cruise, hangs from a flying helicopter at the film’s finale. On the other hand, Hunt loses his footing and falls many feet. He manages to capture a netted cargo load being transported by the copter. “I had to figure out how to drop Tom this far and catch up and how to lift him up in an emergency,” stunt coordinator Wade Eastwood explained. Tom Cruise’s Ethan Hunt must ascend to the 130th story of a 2,722-foot building in Mission: Impossible – Ghost Protocol, the fourth M: I film released in 2011. Hunt is supplied with a single suction glove to accomplish the ascent, while Cruise is tethered to the building with a piano wire-sized cable. The action sequence took place in Dubai’s Burj Khalifa, the world’s highest tower.

Cruise had to rappel down the structure as well.

5.  In ‘Mission: Impossible – Fallout,’ He Broke His Ankle While Jumping To Another Tower I was chasing Henry [Cavill] and was meant to hit the side of the wall and pull myself over, but the mistake was my foot hitting the wall. I knew my ankle instantly was broken, and I didn’t want to do it again, so I just got up and carried on with the take. I said, “It’s broken. That’s a wrap. Take me to the hospital,” Then everyone got on the phone and made their vacation arrangements.

6. In ‘The Last Samurai,’ He Was Nearly Beheaded During A Fight Scene Even Tom Cruise’s eight months of intensive samurai training couldn’t have prepared him for a combat sequence that nearly went catastrophically wrong on the set of The Last Samurai, his 2003 action period epic. “I mastered Kendo, swordsmanship, Japanese martial arts, and other weapons handling techniques,”

Cruise remarked. “Not only did I have to ride a horse, but I also had to fight skillfully. I was a student of Japanese. When it comes to training, I’ve done it everything.” Hut Sticklin, a NASCAR driver, has joined the team as an advisor. He cautioned Cruise against making a right turn. “He had no idea what I was talking about,” Stricklin explained.

When Cruise climbed into one of the stock cars and sped out on the track at Volusia County Speedway outside of Daytona Beach, FL, he may have ignored the warning. The ride, on the other hand, may have easily turned tragic.

8. In ‘Mission: Impossible – Rogue Nation, Cruise Was Fainted For The Underwater Sequence In a thrilling underwater sequence, cruise’s Ethan Hunt jumps into the sea from a 120-foot cliff. Cruise had to hold his breath and play out his purpose for the scenario. Wade Eastwood, the film’s stunt coordinator, stated that the whole action was shot without a stunt duplicate. Foxx confessed that he felt he murdered Cruise during a driving action gone awry. “I push the throttle, the cab slams into [Cruise’s] Mercedes, the Mercedes rises off the ground, and the Mercedes drives off the set,” Foxx explained.

Cruise said, “I was hitting the ceiling.” “I had fallen to the ground.”

10.  In ‘Oblivion’, Cruise Hit His Motorcycle In the 2013 post-apocalyptic action film Oblivion, Tom Cruise got to ride a pretty awesome futuristic motorbike. The year 2077 is shown in the film. Earth had been attacked by aliens 60 years prior, and the world had been converted into a mostly uninhabitable wasteland.

Of course, Cruise performed his own stunts in the film, including riding his motorcycle across hilly terrain. Cruise was seen riding his motorbike on uneven terrain in a video that emerged online. He tries to leap but loses control of the custom-built cycle, crashing. The issue about action movie sequels is that the stunt sequences must become larger and more amazing as the series progresses. Tom Cruise may have pulled off his most audacious move yet in Mission: Impossible – Rogue Nation, the fifth film of his hugely popular espionage franchise.

It’s hard to imagine that one of the world’s top movie actors consented to conduct his stunt work for an action sequence in which his character Ethan Hunt had to hold onto the outside of an A400 airbus while it was flying at altitudes of over 5,000 feet.

Despite his advanced age, Cruise was seen aboard the plane (sometimes standing up, dangling from the wing).

12.  In ‘Mission: Impossible’, Cruise Limped Away With Just An Injured Ankle The Mission: Impossible franchise entered the movie world with a literal boom. Ethan Hunt blows up a gigantic aquarium to make a speedy getaway in Brian De Palma’s 1996 blockbuster. The action takes place in a glass-walled restaurant. Gallons of water and pieces of broken glass are discharged as the fish tank bursts.

The stunt team had no way of knowing exactly where each sharp shard of glass would land. Cruise might easily have been carried away and perished with gallons of pouring water.

13. In ‘Jack Reacher’, Cruise Injured His Foot By Repeatedly Kicking

Cruise did not injure his foot by climbing a building or crashing a motorcycle, as is customary for action stars. The actor said that his greatest injury came from repeatedly kicking someone in the privates in the 2013 film rendition of Jack Reacher.

Cruise stated to Jimmy Fallon, “There’s a moment where I’m kicking a man in the balls, the testicles.” “Although it was a person, no testicles were harmed in the shooting of the picture! We had to repeat the take ten times, and the first ten times were like ‘Yeah!’ My foot swelled after around 50 repetitions… I had to keep loosening my shoe.”