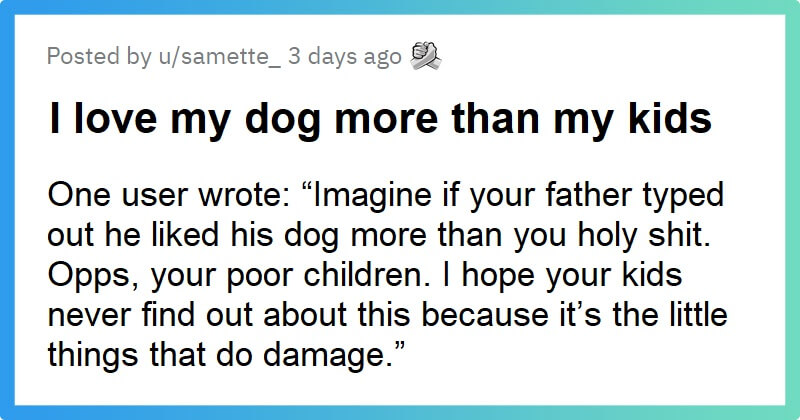 A dad has sparked debate online after he said he loved his dog more than his kids.

Taking to Reddit, the man going by the user u/samette_ revealed that he had two kids and a German Shepard dog. He explained that he loved his dog more than anything, even his kids. It’s because his dog has been by his side no matter what and even helped him get through the divorce with his wife.

In his post, the dad wrote: “I love my dog more than my kids.”

“I (46m) have two kids who I love dearly but for the last 12 years I have had a German Shepard who has been by my side no matter what. I love my dog more than anything, she even helped me get through the divorce with my wife. Recently she had puppies and now even though she’s getting old, a part of her will live on with me for years to come.” Source: dreamstime (For Illustration Purposes Only)

The post has since been shared on Reddit where it has gained many comments from users. Most users felt bad for his poor kids and pointed out he was a weird dad.

One user wrote, “You love your dog more than your kids but you let her have a litter of puppies when she’s elderly. Your version of love is a weird dude.”

Another wrote, “Imagine if your father typed out he liked his dog more than you holy shit. Op, your poor children.”

“I hope your kids never find out about this because it’s the little things that do damage.”

One commented, “Oh, a creature completely at your mercy and entirely, totally dependent on you is more favorable to your children? You know, the humans you made that now have opinions and lives? The hell man. And you’re making her give babies? I don’t think you love her at all. You like someone being subordinate to you; entirely dependent and within your control. Go Fuck yourself. Here’s hoping your kids have at least a decent mother to go to.” Source: onecms (For Illustration Purposes Only)

Many users even think that he doesn’t deserve to have pets or children.

A Redditor called medicalmethsmoker wrote, “Ummm, this post is kinda.. yuck. First, I really hope your children are unaware of this. I understand pets, I’m a cat person and I love my cats so much. They have gotten me through many tough times in my life as my best, non talking friends on four legs. But, to put them over my children? Or any pet over my children? I just cannot imagine a scenario where that would ever be possible. Maybe you should have thought twice before having children. Second, she had a litter of puppies at 12? How much do you actually love this dog? Because that is awful to do to her. She is a senior and should not be having litters, it is beyond irresponsible. People that do that baffle me. I took a cat in that had a litter of 4 because she was not going to be properly cared for and I fixed her as soon as I was able to, she wasn’t even 2. Her babies were fixed as well, I fixed them before I even rehomed them. People that let their animals get knocked up very young and very old are not good pet owners. Sounds like you shouldn’t have children or pets.” Source: pinimg (For Illustration Purposes Only)

The dad caused outrage after replying this comment, “To be fair, about the dog getting pregnant, I can’t watch her all the time, I’m only one person.”

The user medicalmethsmoker then replied, “Lol what? That makes you sound even more irresponsible. If you can not ensure the safety of your dog that you claim to love so much then you are not a suitable pet owner. You claim you are only one person and can’t watch her at all times? So she just wanders around and gets knocked up??? Dude. If you are that negligent and can’t keep track of your dog I really feel sorry for your children. Please never get another pet. And I hope your children have responsible adults in their lives.”

What do you think about this post? Please let us know your thoughts in the comments below!

People Think That These Stunning Photos Of Two Stray Cats Cuddling Are Staged. And You?

Bears Steal Honey From Man’s Bee Farm, So He Turns Them Into Honey Tasters

These 30 Pet Owners Are Delusional As Heck!