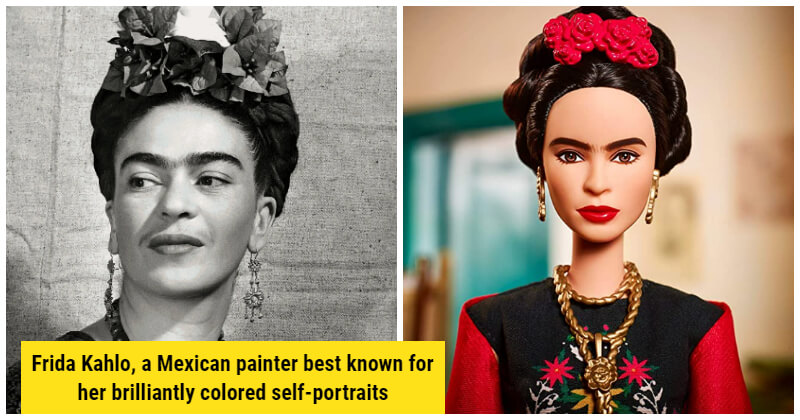 Once upon a time, Barbie was the ultimate girl. She was one of a kind, blonde hair, white skin, the stereotypical white girl.

Mattel has learned a lot since then. Christie, the first “black” Barbie doll, debuted in 1968 in response to the Equal Rights Movement. She was Barbie’s best friend and the first non-white Barbie.

Since then, the brand Barbie has become a lot more diverse and inclusive. Not only do we have Black Barbie, but the brand also extends to cover more races and body types. In other words: Mattel now plays a bigger role in inspiring little girls everywhere to become more than just a pretty Barbie girl. Ida B. Wells, a Pulitzer Prize-winning journalist and civil rights activist, was included in Barbie’s Inspiring Women collection this year. Wells, who lived from 1862 to 1931, owned The Memphis Free Speech and Headlight and used her investigative journalism to expose the atrocities of lynching and prejudice in the South. Soccer star Abby Wambach, a six-time US Soccer Athlete of the Year, was a mainstay on the US women’s national soccer team from 2003 to 2015, receiving her first cap in 2001. Her Barbie is dressed in her USWNT jersey. Gabby Douglas is a three-time Olympic gold winner in gymnastics. Her doll is dressed in a leotard with stars and stripes similar to Douglas’ competition costume and comes with a tracksuit. “I Know Why the Caged Bird Sings,” Angelou’s 1970 book, earned a National Book Award. In 2010, the novelist, poet, civil rights activist, and dramatist was awarded the Presidential Medal of Freedom. Barbie’s Maya Angelou doll carries a tiny copy of her biography. For her portrayal in “Orange is the New Black,” Cox became the first transgender actress to be nominated for a Primetime Emmy Award for acting. She also produced “Laverne Cox Presents: The T Word,” an Emmy-winning documentary about seven transgender young adults. Ibtihaj Muhammad, a US Olympic fencer, was the inspiration for the first hijab-wearing Barbie doll. In addition, Muhammad was the first American to compete in the Olympics while wearing a hijab, a traditional Muslim headscarf. In 2016, the year she competed in the Rio Olympics, she was named one of Time magazine’s 100 Most Influential People. Mattel made a Barbie replica of Samantha Cristoforetti, the first female Italian astronaut with the European Space Agency. Cristoforetti will command the International Space Station on a trip scheduled for April 2022. Tessa Virtue is a three-time Olympic ice dance medallist. The Barbie’s clothing is based on Virtue’s suit from the 2018 Winter Olympics. She achieved a Super Slam, winning all major events in their senior and junior careers, and is widely recognized as one of the best ice-skaters of all time. Amelia Mary Earhart was an American novelist and aviation pioneer. Earhart was the first woman to fly alone across the Atlantic Ocean. Her commemorative Barbie is already dressed for flight. Kristin Chenoweth has been nominated for and won an Emmy and a Tony Award. She earned a Tony Award for Best Featured Actress in a Musical in 1999 for her role as Sally Brown in Broadway’s You’re a Good Man, Charlie Brown. Katherine Johnson, one of NASA’s “Hidden Figures,” has been memorialized as a Barbie. She was a NASA employee whose orbital mechanics calculations were important to the success of the first and subsequent US crewed spaceflights. Rosa Parks was an American civil rights activist best remembered for her participation in the Montgomery bus boycott. The United States Congress has recognized her as “the mother of the freedom movement” and “the first woman of civil rights.” The Parks doll is dressed in a flowery dress with a hat, white gloves, and a grey coat. Barbie created a doll based on Zendaya’s outfit at the 2015 Oscars, complete with her dreadlocks. Giuliana Rancic of “Fashion Police” ridiculed Zendaya’s dreadlocks, which made headlines. Magdalena Carmen Frida Kahlo y Calderón was a Mexican painter best known for her self-portraits and works inspired by Mexican landscape and antiques. She has garnered enormous worldwide acclaim for her work. The successful supermodel-turned-business mogul Heidi Klum is one of the most famous supermodels of all time. She has dabbled in many careers, including television host and producer. The doll version of the supermodel and television personality is dressed in a pink glitzy gown and gold shoes. Cher is a singer, actress, and television personality from the United States. The media frequently refers to her as the “Goddess of Pop.” Her Barbie doll is based on one of her 1980s outfits. The Barbie is dressed in a doll-sized recreation of the attire she wore in her 1989 music video for “Turn Back Time.” Grace Patricia Kelly was an American actress who married Prince Rainier III in April 1956 after appearing in numerous notable films in the early to mid-1950s. Her Barbie doll is the epitome of the 1950s glitz. Ree Drummond is also the author of many recipes, a children’s book, and an autobiography. The Pioneer Woman Barbie comes with its own kitchen, inspired by renowned cook Ree Drummond. Over 30 items are included in the kitchen, including a Barbie-sized toaster, mixer, and cast iron saucepan. Jennifer Lopez became the first Latin actress to earn more than $1 million for her first main role in Selena (1997). Barbie pays tribute to her by wearing a replica of the outfit she wore on tour. Ashley Graham, a model, and body-positive campaigner made certain that the Barbie version of herself did not have a thigh gap. Ashley has gone on to become a world-renowned plus-size supermodel, appearing in several collections and catwalk events.

The 15 Weirdest Celebrity Baby Names Ever

‘Manifest’ Season 4: Who Will Die In The End Of The Season?

8 Most Bizarre Phobias Of Your Favorite Celebrities