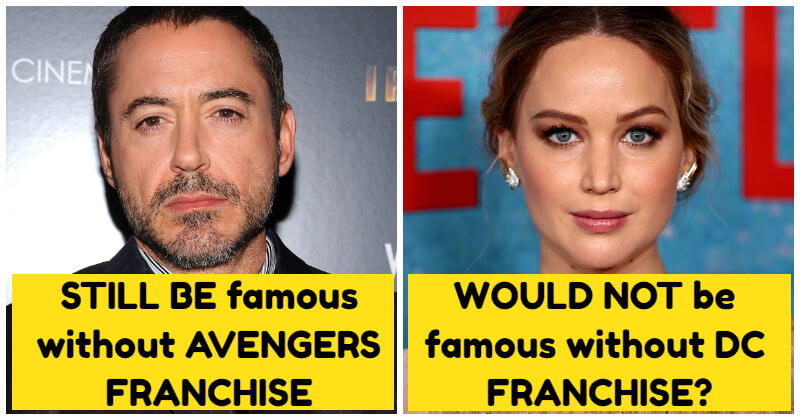 Some actors might play some small roles at the beginning of their careers. But the stories now are different. Some superstars get millions of dollars when they appear in a movie or TV show. Because they have proved their talents to the industry and created their household name. Still, they play a key role in the success of a movie thanks to their brand names in the cinema world. However, there is always a controversial topic on which movies are truly the turning point in their acting careers. Some people are wrong that they believe some celebrities hit the big time through some iconic movies. But they were already well-known before those iconic movies.

Robert Downey Jr. is considered to stick with the Avengers franchise. We all know how iconic the role of Iron man is. But do you know Robert Downey Jr. before he starred in the Avenger franchise? Almost people say yes because he made his acting debut when he was 5 years old. He also starred in a lot of movies like Chaplin, Kiss Kiss Bang Bang, Trophic Thunder, and TV shows such as Ally McBeal.

Here are 14 actors who have already been famous without their hit franchise roles. Do you agree with us? Let’s put your opinion in the comment section. Keanu Reeves has a four-decade acting career. So John Wick franchise is not the only movie that made his brand name in Hollywood. He already starred in “The Matrix” (1999), “My Own Private Idaho” (1991), and “Bram Stoker’s Dracula” (1992) long before the John Wick franchise. Robert Downey Jr who kick off the MCU by portraying the Iron Man’s role also has plenty of other movies worth watching. Yes, we are talking to the man who started his career at the age of five. So, it’s comprehensible how rich his IMDb profile is. From “Weird Science” (1985) to “Zodiac” (2007), Robert Downey Jr has conquered the cinema world since he was very young. #4 Would Jason Momoa and Aquaman in the DC Comics franchise Although the role in “Aquaman” might be the most impressive performance, Jason Momoa is also well-known for the character of Khal Drogo in ‘The Game of Thrones,’ as Declan Harp in ‘Frontier,’ and as Ronon Dex in “Stargate Atlantis”. Still, he successfully portrayed his role in “Conan the Barbarian”. “Batman V Superman: Dawn of Justice” and “Justice League” was also worth mentioning in this list.

#5 Would Zendaya as MJ in the Avengers franchise The singer turned out to be one of the fastest-rising young actresses in Hollywood. While her role in the MCU Spider-Man movies is regarded as the most beloved character in her acting career, she proved she was more than that with her HBO television series, “Euphoria” before she found her success in the Avengers franchise.

#6 Scarlett Johansson as Black Widow in the Avengers Johansson started her career by starring in the comedy “Manny & Lo“, a role at 12-years-old and it was only four years later she got the success with “Ghost World” and “The Man Who Wasn’t There”  which made her a household name before hitting the big time as Black Widow in the Avengers franchise. Jennifer Lawrence started her career by starring in “Winter’s Bone“, the rural mystery that marked only her third feature film appearance, getting a Best Actress Oscar nomination before taking part in the DC comics franchise. Hugh Jackman Wolverine made his Hollywood debut in “X-Men” (2000) and has since become one of our most talented and handsome leading men. But long before we knew his name, Jackman was an actor in Australian TV and cinema. He also worked between musicals, dramas, and westerns.

#9 Dwayne Johnson as Hobbs in the Fast & Furious franchise #11 Halle Berry as Storm in the X-Men franchise #13 Chris Evans as Captain America in the Avengers franchise Chris Evans successfully portrayed the ice-cool Human Torch in two “Fantastic Four” movies. He also played a jerk-ass ex-boyfriend of Ramona Flowers in “Scott Pilgrim vs. the World” before he became the Captain of America. Lord of the Rings was a massive financial success, grossing over $897.7 million on a $93 million budget making his following success in the American fantasy swashbuckler film ‘Pirates of the Caribbean as Will Turner. But he had already known Noel Harrison in the drama series ‘Casualty’ in 1994. And in 2001, he starred as ‘PFC Todd Blackburn’ in the Ridley Scott-directed war film ‘Black Hawk Down right before “The Lord of the Rings: The Fellowship of the Ring” was released.