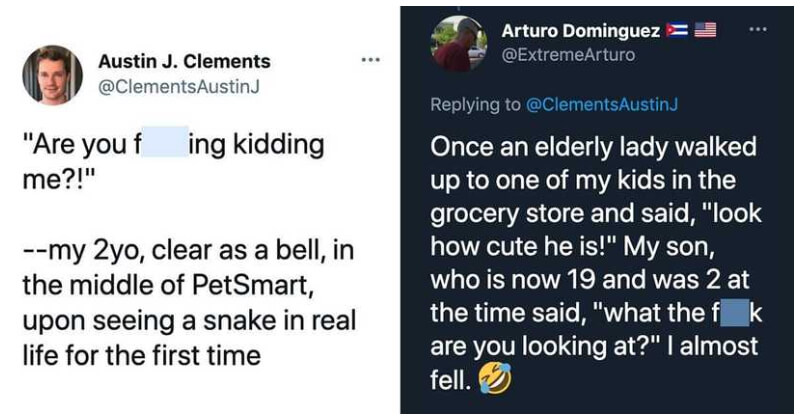 Language is embedded in our genes. Humans are born able to understand certain languages. Still, there’s a big difference between understanding and being able to use something. Even though we can understand our mother tongue with not so much effort, we all need to learn how to use it, and it often takes years to do so. We live in groups, and by interacting with each other, we learn and develop our language ability.

Language is also acquired. Humans learn how to speak in correct grammar, make meaningful sentences, and use appropriate words. Just like all other intelligent lifeforms on earth that can communicate, parents or the elders in a group/community teach babies to speak. A wolf is not born knowing how to howl or which howl has which meaning. Wolf pups are taught how to make sounds and use those sounds to communicate, together with other skills like hunting and courting.

#1 What to say when you see a snake for the first time? Upon seeing a snake for the first time, we bet that no child (2yo or whatever) will ever say something like “Jesus Christ,” or “holy sh*t,” much less “are you fcking kidding me?!” This dad must have been stunned by mixed emotions when hearing his child say such a sentence. Still, that’s what makes him a good dad, and all dads can confirm this.

#2 He just wants his snack He stated it very clearly. That’s what we called confidence. And parents will love to hear that their 4yo child stood up to give his opinion. Well done, kid!

#3 Learn a bit about road rage Well, we have to admit that he’s got a point, that guy was an absolute a$$hole. Still, daddy must have secretly taught his boy some new words behind mom’s back. I’m curious to know what he would say when mom tells him this story.

#4 What are you looking at? Shy boy doesn’t want anyone gives any type of comment about him, including about his appearance. And don’t even think about looking at him. Who do you think you are? This is not a zoo, and I’m not an animal. Look away! What a sentence to say at such a place, to such a matter. And the person to hear that (as described as a very religiously uptight grandma) must have had a heart attack. Still, she made quite a colorful profanity at such a young age. She’s gifted, indeed. “Just quit it, mom. We’re late.” We can imagine that moment of panic and frustration overwhelming the mind of a 3yo. And glad to know that he knew how to collect his stuff. Yes, by telling mom to just leave it, “quit fcking with him.” So, this story tells that if your child doesn’t talk much, there’s nothing to worry about, maybe they’re just holding back their words so as not to offend others. And well, even though what he said was not what a child should, other family members were just as bewildered as they were happy to know that their baby could speak correct English.

#8 He finished it for them Love the part when a little voice from the backseat casually finished the sentence, with no more than one word. *Mic drop*. Gramps should have been proud of his son; he had quite a character.

#9 Buckled into the car seat #11 Couldn’t hide her toy there anymore #14 Using a finger at a church Well, we humans are proud to be the most intelligent on earth. And we of course have something to set us apart ad above. So, not just our babies are passively taught by parents but they also learn actively by themselves. They may hear their parents talk to each other and learn one or two sentences. And once in a while, they use those sentences to surprise their parents. ClementsAustinJ shared an honest moment when his 2yo yelled out profanity upon seeing a snake, and Twitter users responded with similar situations with their kids utilizing colorful language. Well, don’t know if parents should be proud or feel embarrassed hearing their babies say that.

American Shares Culture Shock Experiences While Living In Britain, And Asks For Explanations About Confusing Things

Some Zoo Signs Are So Weird, But They Are Brilliantly Funny

Homeowner Refuses To Be Included In HOA, And HOA Becomes Furious

Because Of Being Jealous With His Girlfriend’s Horse, Controlling Boyfriend Demands That She Sell Her Horse

Is This Redditor Acted Like A Jerk For Refusing To Babysit Her Sister’s Kids? Here’s What People Said