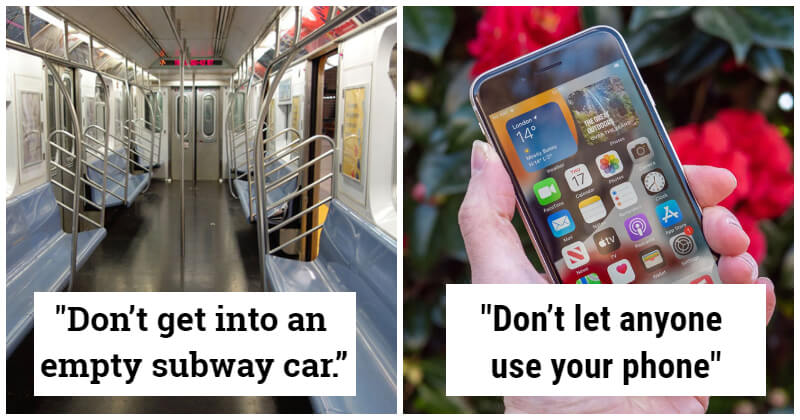 Even if we want to think we do, The Americans don’t know everything there is to know about every other country(. We my have picked up a few fascinating things about the French while studying abroad, but beyond that, we are notorious around the world for being quite bad at adapting to different cultures. So, as a result, most when visiting the USA have to learn about the culture beforehand as to not piss off the locals…unintentionally. Here are 20 things you should absolutely know before visiting America.

#1 “If you’re in a New York City subway, try not to make too much eye contact or look too long at people around you. Old guy lighting up a crack pipe near the door between cars? Just ignore the smell. Woman near you screaming at the top of her lungs at her silent child? Keep listening to your music #3 “Raccoons are cute… but from a distance.” #4 “Don’t think the laws are the same everywhere. You can walk with an open alcohol container in Vegas but not many other places. Alcohol laws, pot laws, firearms laws, smoking – lots of very different laws depending on the state and city where you are.” #5 “If pulled over by the cops, do not exit the vehicle unless they ask you to. The cops might sit in their vehicle for a while, & then they will approach the window & expect you to talk to them while sitting in the car.” #6 “If you find yourself in Florida, absolutely do not swim in the lakes, ditches, or channels. Any standing body of water can (and does) have alligators in it. Also possibly water moccasins. And maybe even diseases.” #7 “Don’t assume that the price shown on an item for sale is your price for said item. There are almost always taxes that are added to the price when you go to pay.” #8 “I live in an area around 4 major rivers and my town has a booming river industry. Someone drowns at least once a month. The current is so strong as soon as your feet hit the water you’re most likely gone. Look at the river, take pictures, stop and look at our murals along our flood walls, but do not go near the river!” #9 “Underestimate distances. When I was a tour guide, far too many customers asked how many HOURS the train to New York was [in seattle] and I had to put their jaw back in when I said 5 days.” #10 “Don’t take pictures with the people dressed up in costumes in LA/ NYC.” #11 “To not Take anything from national parks.” #12 “If you go to a department store, Kohls, Target, or even Home Depot, they often try to have people sign up for credit cards. Absolutely don’t do this. Tell your non-English speaking friends this…” The short time I worked at target, I often saw people who were clearly just visiting the US get signed up for credit cards. It may not alway work without a social security number, but it is a major time suck for sure.

#13 “If you’re visiting Las Vegas, do not engage with anyone that asks if you’ll be in town tomorrow night. They’re trying to rope you into a timeshare presentation and even though they’ll offer free show tickets, meal vouchers, and even cash, it’s not worth it!” The tour and “short” presentation will be way longer (and obnoxiously higher pressure) than you’d expect and they know damn well after you’ve invested a few hours you’re not going to leave without the promised reward that they only give you at the very end. These people are most often found at the entrances to malls or casinos at what can be easily mistaken for information booths. Either just say “no” no matter how long you’re actually still going to be there or flat-out ignore them. Also don’t accept the cards being handed out by people in brightly colored shirts on the strip unless you want a promo for strippers.” #15 “Most places don’t allow alcohol in an open container in public. Have your drinks at the hotel, bar, or restaurant. Can be fined or arrested depending on state.” #16 “If you are coming to the Midwest or northeast during winter be prepared and don’t think sunshine means warm weather. It can be deceptively cold:)” #19 “Visiting south west USA? Cali, Arizona, Nevada, New Mexico ect, DO NOT UNDERESTIMATE THE HEAT! All too often people try and hike in 113° and end up needing rescue. And thats no good for anyone.” #20 “Don’t let anyone use your phone, and don’t stop in the middle of the sidewalk (please move to the side).” 20 Stories That Show Kindness Is All Around Us

Reply To These 30 Dumbest, Pettiest Warning Signs With Your Biggest LOLs

17 Pics That We Totally Didn’t Expect to See Today

16 Crazy Texts From Parents Who Have Lost Their Minds

20 Guys Who Aren’t Really That Tough

21 Hilarious Translation Fails That Are Better Than Any Jokes

People On Social Media Were Asked To Draw A Duck, And The Results Couldn’t Be More Hilarious

32 Painfully Funny Situations Everybody Has Experienced, But Nobody Talks About

20 Lifehacks People Shared That Will Come In Handy