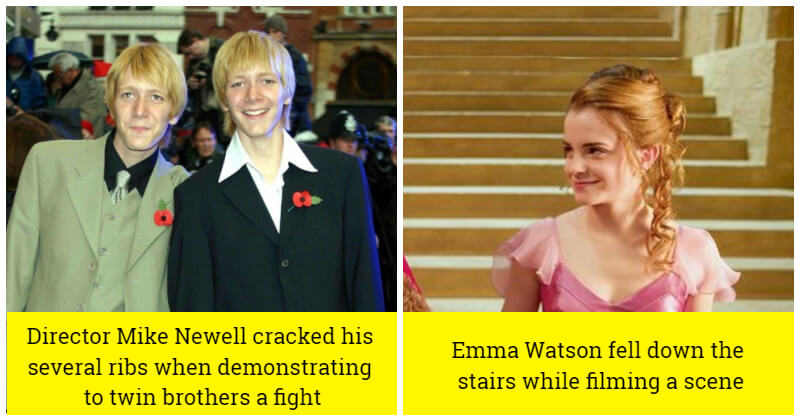 The “Harry Potter” series became one of the most popular film franchises of all time after kicking off in the fall of 2001. Spanning more than a decade, these films comprised a majority of people’s childhoods and many of us literally grew up with all characters. Although the world of “Harry Potter” is full of magic secrets and intricate details, some of the most shocking and intriguing things actually happened behind the scenes of it all.

While the cast all got along, for the most part, most of them were still kids going through puberty onset. They probably wanted to make their most embarrassing moments disappear with a special spell.

Below are 8 things that happened during “Harry Potter” filming that few knew about. In the fourth movie, the twin brothers playing Fred and George had to do a fight scene. The scene wasn’t coming together because they weren’t fighting intensely enough. Therefore, Newell stepped in to demonstrate what the fight should look like. He fought with both two and that broke several of the director’s ribs.

#2 The costume designer changed the color of Hermione’s dress Some people believe that Hermione’s dress should’ve been kept blue in the movie as it was in the book. The costume designer explained that if Hermione wore a blue dress she wouldn’t have stood out against the Yule ball décor, which was also blue.

#3 Severus Snape played a prank on the director Source: Harry Potter and the Order of the Phoenix

Whether Severus Snape was a good or bad character in “Harry Potter”, one thing is true that Alan Rickman who landed the role of Snape was a funny guy. Director Mike Newell complimented Rickman’s eye color but wasn’t aware that they were fake. Then the actor took off one of his lenses in front of the director.

#4 Emma Watson fell down the stairs while filming a scene Source: Harry Potter and the Goblet of Fire

Emma Watson lived an embarrassing moment during the film production of “Harry Potter and the Goblet of Fire”. It is the scene where Hermione went down the stairs and it captured the attention of everyone. It just happened in seconds but for the actress it was infinite.

#5 During classroom scenes, all child actors were doing their real homework Oliver Phelps, who played Weasley shared that in the books in the Great hall set, all child actors actually did their own schoolwork to make the scene look more authentic. It is a great idea.

During filming the underwater scene in “Harry Potter and the Goblet of Fire”, Daniel Radcliffe suffered two ear infections. In spite of spending several consecutive hours underwater, the actor felt glad as fulfilling an amazing scene.

#7 Henry Cavill auditioned for the role of Cedric Diggory In an interview with ABC News, Henry Cavil revealed that when auditions were underway for “Harry Potter and the Goblet of Fire,” he auditioned for the role of Cedric Diggory but was ultimately rejected in favor of Robert Pattinson.

#8 Harry’s Lightning Scar Was Applied Around 5,600 Times Throughout The Making Of The Series Source: Harry Potter and the Order of the Phoenix

Harry Potter’s lightning scar is one of the staples of “Harry Potter” franchise. The makeup team had to apply the scar approximately 5,600 times and Daniel Radcliffe did it himself a few times.