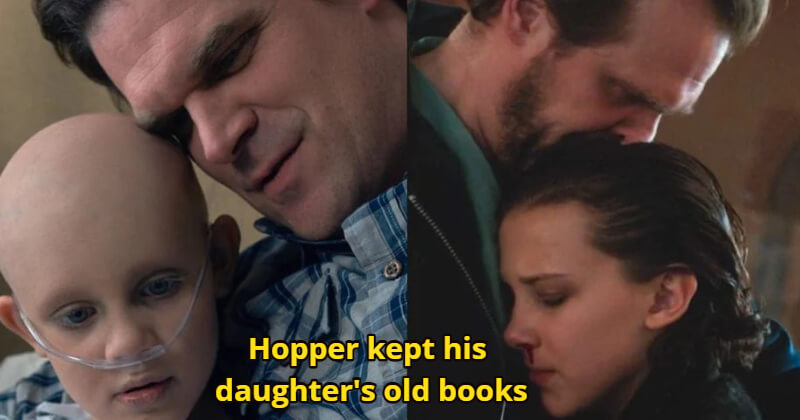 Stranger Things fans will likely be seeking to refresh their memories of the previous three seasons before vol 1 of the new season already premieres on May 27. Stranger Things fans have appreciated the small details in the film that contribute to the film’s heartfelt vibe.

The Duffer brothers and their team seldom appear to leave jigsaw pieces and props to chance, from the emotional aspects of Hopper’s prior family life to his current life as Eleven’s guardian to the minute outfit elements that express the character’s emotional condition.

A glance back at previous details may help Stranger Things viewers prepare for season 4. Prepare for sights outside of everyone’s favorite scary fictitious town of Hawkins, Indiana this time around. Even though the group has grown up and is no longer living together, they will reunite to combat the horrors of the Upside Down.

So, keep scrolling down to discover 10 things about your favorite show that you probably didn’t know!!!

#1 They Replayed A Sentimental Song Stranger Things has always relied heavily on music to propel its stories forward. Who can forget The Clash’s “Should I Stay Or Should I Go?” is used to connect with a possessed Will Byers?

The song “We Can Be Heroes” was used as a throwback in the finale of season 3 to the 4th episode of season 1. It’s quite emotional each time it’s performed.

When Will’s “body” is discovered, the first one is played, when Hopper’s letter is read, the second one begins. The version being played is Peter Gabriel’s slowed-down interpretation of David Bowie’s “Heroes,” with swelling strings and soulful vocals adding extra resonance to the already sad lyrics.

#2 There Were Hints In The Numbers The series isn’t bashful when it comes to mathematical Easter eggs, with characters named after numbers. While they are apart, Mike and Eleven keep track of how long it has been since they last saw each other.

People realized there was a connection between the number of their separation days counted. The number of days (353) adds up to 11, and Hopper and El communicate through radio channel 11. During season 2, Mike also utilizes channel 11 on his walkie-talkie to call El every night. Mike and Eleven’s cute preteen relationship includes a few more lovely gestures like these hidden patterns.

#3 Characters’ Clothes Also Hinted At Growing Up (Or Not) The Stranger Things’ kids grew up a lot in season three, with new relationships, growth spurts, and new hobbies. Will, on the other hand, seemed out of place in comparison to the rest of his buddies. It makes sense since he still wants to be a kid and play D&D all day, but he never had the chance because he spent much of his youth in season 2 in a hospital.

They also remarked that he appeared to be wearing the same clothing from Season 2 that was too small for him. This appeared to depict his stunted development as a result of his terrible experiences in the Upside Down. Stranger Things’ heartwarming moments win viewers over and keep them coming back season after season. We adored the way Hopper read to both his daughter and Eleven from the same book. You can see it when he’s sitting with Sarah in the hospital reading to her, and then later in season 2 when he sits with Eleven on her bed and reads it to her.

The book looked to be Anne of Green Gables, and sharing the narrative with Eleven was a key step towards bringing her into his heart, according to everyone. Mike and Eleven’s romance blossomed from their strong friendship, and their bond can be seen in their bedroom furniture. We were extremely proud for recognizing that when El is living with Hopper in season 3, she has a bird poster near her bed – the same poster appears in Mike’s basement in season 1. You can see a lot of items that were in Mike’s basement if you look closely.

Eleven’s first bedroom in Mike’s basement and her lover must have realized she needed a bit of him to feel at home at Hopper’s, so he gave her this thoughtful present. Stranger Things season 4 is expected to include great content for Mike and Eleven, despite the fact that they are on opposite sides of the nation by the end of season 3.

#6 There Are Subtle Costume Details Will’s outfit is slightly different from the other three in the Halloween episode since the other more affluent families bought costumes, but Joyce opted to sew Will’s costume herself to save money.

Joyce made the outfit in an earlier episode, and the prior writer admired the depiction of a less well-off family being resourceful during the expensive holiday season. Stranger Things may deal with otherworldly difficulties in each episode, but it also offers societal commentary on the characters’ troubles.

#7 Hopper’s Life Was More Complicated Than Viewers May Know People pointed out a portion of Hopper’s background. They particularly enjoy how Hop’s service in Vietnam is referenced in a non-obtrusive way.

El’s regulated usage of the Colt 723 on semi-auto only, and, of course, the pretty evident signs of poorly-treated PTSI that we witness throughout (although this also has a lot to do with his daughter’s murder) are all visible throughout. Though Hopper has likely experienced more trauma since meeting Joyce and the kids, having a strong support system again may have ultimately allowed him to recover. It’s no surprise that the Season 2 teaser evoked a terrifying movie with a magnificent poster, given Stranger Things’ intended horror allusions and sophisticated style. There’s a poster of a movie called The Dark Crystal in Mike’s room in the first episode of the show, and it drew people’s attention since it seems uncannily similar to a marketing image for Stranger Things 2.

The film in question is a fantasy-esque feature that was released in 1982. Aside from providing relevant pop cultural information for a program set in the same decade, Netflix might have been covertly marketing The Dark Crystal: Age of Resistance, a prequel series due in 2019.

#9 The Answer To How Hopper Survived When Hopper disappeared from a dangerous platform at the end of season 3, viewers were unsure if he would survive. However, signs of a Russian jail and season 4 promos revealed that Hopper had somehow survived. Fans are overjoyed that Hopper will be returning, whatever he did it. Sean Astin was only on Stranger Things for a brief time as Bob Newby, but the Goonies actor became a vehicle for the authors’ subtle cinematic allusions. People notice something more than his superb Dracula costume: “When Bob says take a step into the future and Joyce responds future can wait, ironically Bob is using the same camera as Marty in back to the future.” Despite the fact that Back to the Future was released in 1985 and Season 2 of Stranger Things is set in 1984, the writers may have sought to pay homage to another 80s creative inspiration.

Bob’s phobia of clowns and the balloon debate are both extremely IT-related timeframes. If Bob had died in 1984, he would have been unaware of Stephen King’s 1986 thriller or the 1990 television series. Whether or not these references were made on purpose, Bob was always a hit with the fans.

What Died Young Celebrities Would Look Like Today If They Were Still Alive? And It’s Truly Emotional