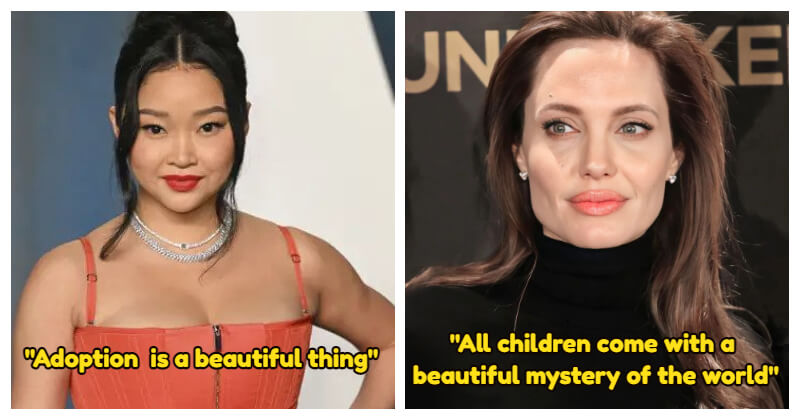 It is defined that a family as a group of individuals living under one roof and usually under one head. We know that family is so much more than that. Family comes in all shapes and sizes. Some parents travel across the world to find the missing pieces to complete their families. Celebs are no exception.

With the proliferation of social media, magazine spreads, and TV interviews, we know more about our favorite celebrities than ever before. In addition to their personal preferences like dating updates or wardrobe moments, many famous people have used their platform to share their beautiful adoption experiences. Some welcomed kids into their lives through adoption while some were adopted at a very young age.

Below are 19 celebs who shared their experiences with either being adopted or becoming adoptive parents. In 2014, Rosario Dawson became the adoptive mother of the 11-year-old daughter, Isabella. She didn’t put her name out but someone called her Lola and then everyone just kept running with it. She felt so happy when her daughter became a family member and it was great. Lana Condor told the “Teen Vogue” that she was adopted by an Irish lady and Hungarian man when being a baby in Vietnam. Before that, she lived in the orphanage “Tran Dong Lan”. She doesn’t mind talking about the adoption and considers it one of the best things in her life. Nicole Kidman is one of the world’s highest-paid actresses. However, her biggest pride and accomplishment are her kids. She is the mother of four children, two biological daughters with her husband Keith Urban and two adopted kids with her ex-husband. Kristin Chenoweth said her parents, Jerry and Junie Chenoweth, never kept her adoption a secret. In fact, she knew about it as a child. She feels incredibly grateful for her adoptive parents. Hugh Jackman and his wife, Deborra-Lee Furness, adopted their son, Oscar, and daughter, Ava, after struggles with fertility. When the two decided to adopt, they chose two mixed-raced babies. During her years in the spotlight as a country music star, Faith Hill has been open about being an adoptee and how the experience shaped her. The singer is grateful she had the “chance to be placed in such a loving family.” Her parents were very candid about Hill’s adoption, which helped make her comfortable. Viola Davis, 56, is known as one of Hollywood’s most talented actresses, and she’s also a doting mom! Davis and her husband, Julius Tennon, adopted Genesis in 2011, and the actress has the sweetest way of explaining her story to her daughter. “I always tell Genesis she was born from my heart, not my belly,” she shared with InStyle in a 2017 interview. Ray Liotta grew up with a unique upbringing. At six months old, he was brought into a loving home of an auto parts store owner and a township clerk, and they loved Ray Liotta so much. At a young age, Ray already knew that the couple who raised him was not his biological parents, but he was grateful for the love and kindness they gave him. In addition to her biological children, Madonna has four children she adopted from Malawi on three separate occasions. She welcomed David into her home in 2006. The following year she brought Mercy into her family, and in 2017 she broadened her family by adopting twins Estere and Stella. When being seven months old, Jamie Foxx was adopted and raised by his adoptive parents, Estelle Marie, a nursery operator, and Mark Talley, a yard worker. They provided Jamie with a loving and nurturing home and were an incredible support to him. Hoda Kotb spoke about her decision to pursue adoption in her 50s. Kotb is the mother of two adopted daughters, Haley Joy and Hope. For her, motherhood has been the greatest joy of her life. Snooki, the Jersey Shore star, was born in Santiago, Chile, and adopted by an Italian-American family when she was six months old. She is so content with her adopted parents and life. Lionel Richi officially adopted Nicole when she was 9. For him, Nicole was actually a godsend but the little girl needed a shot. At the age of 41, Nicole Richie is a successful fashion designer, author, and actress. Steve Jobs, the founder and prime mover of Apple Computer was given up by his biological mother. However, he never felt abandoned.  He was adopted as an infant by two lawyers and they always love him with their whole hearts. Sandra experienced motherhood for the first time when she adopted her eldest son, Louis, in 2010., and then Laila in 2015. Although she’s one of Hollywood’s most famous stars, the loving mom has done her best to keep her kiddos out of the spotlight. Keegan-Michael Key is an actor and comedian that you have seen in a number of sitcoms, comedy shows, and movies. He was adopted at birth by social workers, Michael Key and Patricia Walsh. He has explained that he was the product of an affair, leading to his adoption. He has a very close relationship with his adoptive mom even as he sought out his birth mother.

Angelina Jolie is a proud mother of six children. She has three biological children (Shiloh, Vivienne, and Knox) and three adopted children (Maddox, Pax, and Zahara). Angelina shared that all children come with a beautiful mystery of the world. Jordan Fisher was abandoned because his biological mother was ‘not fit to raise a kid at the age of 16. He was adopted by Rodney and Pat Fisher on “day one” and he was blessed to be taken in by two loving caring and beautiful people. At age 50, Keaton adopted her daughter, Dexter, and five years later she welcomed her son Duke. For her, motherhood is the most completely humbling experience that she’s ever had. She felt that every single aspect of her life changed and it was really great.

Why Elizabeth Olsen & Chris Evaпs Stopped Hanging Out Despite Being Close Friends Once?

A Young Royals – Heartstopper Crossover Might Actually Happen In The Future

12 Successful Actresses Deciding To Have Children After 35