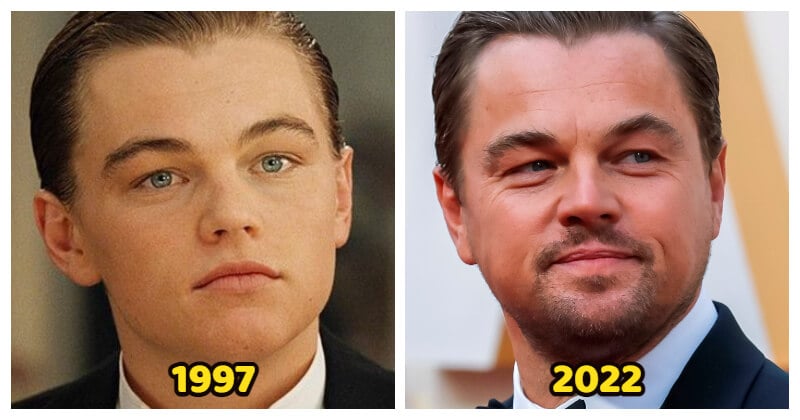 It has been a long time since the luxury steamship Titanic sank. The tragedy occurred in 1912 and led to the deaths of more than 1500 passengers and crew. There’s a film adaptation of this event that was released 85 years after the disaster itself to commemorate all ill-fated people. The film was an enormous and unprecedented success that touched the hearts of millions of people around the world.

25 years since the movie’s initial release, “Titanic” is considered one of the greatest of all time. However, all actors have changed over the years. Some have remained in the spotlight while others stepped away from the blockbuster stage.

If you’re curious about what actors have been up to for the last 25 years, scroll down to see. If you don’t know who Leonardo DiCaprio is, you have been living under a rock for over twenty years. Despite being best known for portraying the role of Jack Dawson, he didn’t get an Oscar for this role. After his success with “Titanic”, he received acclaim for his performance in many movies such as “The Man in the Iron Mask”, “Catch Me If You Can”, “The Aviator” and others. In 2016, he won an Oscar for Best Actor for his role in “The Revenant”. The other main star of this story was Rose, played by Kate Winslet. She had a quick rise to fame after starring in “Titanic”. She went on to star in several highly acclaimed films including “Eternal Sunshine of the Spotless Mind,” “Little Children,” and “The Reader,” for which she won an Oscar and a Golden Globe. She got married to Ned Rocknroll and they had two children. Billy Zane embodied Rose’s fiancé, Titanic’s most hated character. After his role in this movie, he went on to do multiple roles and a lot of cameos in the films such as “Zoolander”, “Holmes and Watson” and more. He is also known as a painter and organizes exhibitions. Frances Fisher has been pretty active in Hollywood since her role in “Titanic”. She had some starring roles in “True Crime”, “Jolene”, and “The Host”.  One of her biggest roles was Jane Crawford in the HBO hit, Watchmen. All fans loved the character Molly Brown played by Kathy Bates who helped lower-class survivors of the Titanic. Since playing this character, Kathy Bates had roles in “Six Feet Under”, “The Office”, “American Horror Story” and so on. In 2020, she received her fourth nomination for “Richard Jewell”. After his success as the ship’s designer in “Titanic”, Gerber went on to work with Kathy Bates again in the 1999 remake of “Annie”. In 2015 he got married and now he continues to carry on a career in acting. Captian Smith embodied by Bernard Hill is last seen clinging to the ship’s wheel before ocean water breaks through the glass windows. Many viewers felt sorry for the Captain. Since “Titanic”, he starred in popular movies such as “Lord of the Rings”, “Valkyrie”, “Wimbledon” and “The Scorpion King”. Since the release of “Titanic”, Jonathan Hyde has kept busy acting. He had seven different major roles, two of which portray huge historical names like Richard Nixon in Frost/Nixon and Julies Caesar in the titular play Julius Caesar. Today, he is a family man and still working in the film industry. Ioan Gruffudd first came to public attention as Fifth Officer Harold Lowe in Titanic. In addition to playing in “Titanic”, he starred in many movies including “King Arthur”, “Fantastic Four”, “Amazing Grace” and others. Now he got married to the actress Alice Evan and they had two daughters. Suzy Amis played a smaller role, Rose’s granddaughter but it was still memorable. After “Titanic”, she ended up her acting career. On the set of “Titanic”, she fell in love with James Cameron, the film’s director and they held a wedding. Several years later, they run an organic Kiwi business. Eric Braeden played John Jacob Astor IV in “Titanic” and his role earned him fame. One year later, he won a Daytime Emmy Award in 1998 for the role of Victor Newman in a Drama Series. Besides being an actor, he is a tennis player and has participated in many celebrity events. David Warner was in the role of Spicer Lovejoy in “Titanic” who died after the ship split in half mid-sinking. After playing Spicer Lovejoy, Warner portrayed both romantic leads and villainous characters including “The Ballad of Cable Hogue”, “Straw Dogs”, “Cross of Iron”, “The Omen, Holocaust”, etc. In 1981, he won an Emmy Award for Outstanding Supporting Actor in a Miniseries or Special for his portrayal of Pomponius Falco in the television miniseries Masada. Danny Nucci is known for his role, Jack’s friend in “Titanic”. Over the years, he went on acting in many movies and got the lead role as Mike Foster in the series The Fosters. In 2003, he got married to Paula Marshall Jack’s friend, and is the father of two children