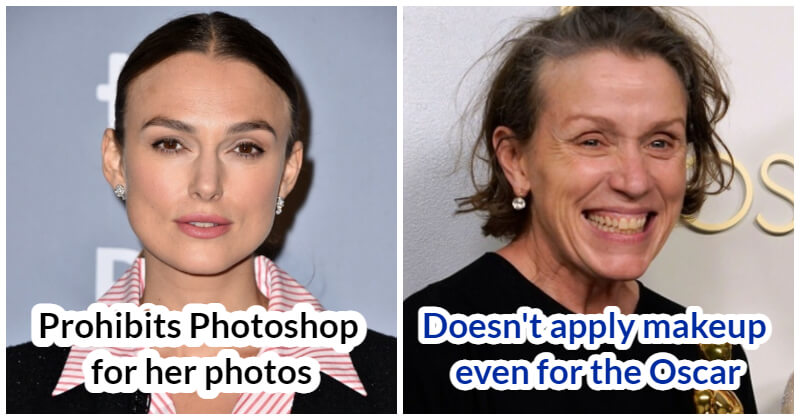 We are all aware that in order to accomplish something, we must devote significant time and resources. And there are many actresses who have put a lot of effort into advancing their careers. That means hard work, specialized training, being highly attuned to their diets, and pretty much whatever else it takes to make their performance perfect. But it doesn’t mean they deny what they support and believe, or their personal hobby to please people. Each actress on this list has a story that may surprise you.

You’re probably unaware of these because we don’t usually delve into the private lives of celebrities. As a result, we rarely know about their story behind the scenes. That’s why we missed out on many of these celebrities’ merits and deeds.

We will show you something interesting off the screen. From changing accents for the role, facing illnesses, or supporting natural beauty, here are 9 talented actresses whose merits outside of film deserve a separate award. These famous actresses have a great desire, which gives them the ability to achieve their success today. Their stories will surprise and inspire you. Continue reading to learn more! It’s hard to think Jennifer Aniston has any challenges at work, given how successful she is. However, in 2015, the actress revealed that she has had dyslexia (the inability to recognize written language fast and correctly) since childhood.

To get out of it, Aniston has not only learned to live with her illness, but she has also chosen a profession that requires her to read a lot of literature and memorize large portions of various materials. Lady Gaga hasn’t had a lot of film parts yet, but the ones she has had have been vivid and expressive. It’s all because of her dedication. Lady Gaga studied the biography of her character, Patrizia Reggiani, down to the slightest details before filming “House of Gucci”. She learned her Italian dialect and kept entirely in character for 9 months, even while the cameras were off, in order to create a whole and convincing character. Zendaya is one of Hollywood’s most promising actresses. She is known for her active social position in addition to her cinematic performances. Zendaya is a proponent of natural beauty who isn’t afraid to share images without makeup. She once revealed a non-Photoshopped version of a magazine shot of herself. Charlize Theron grew up in South Africa. Afrikaans is her first tongue. As a result, her English was very limited before she arrived in the United States. Theron had to start from zero when it came to learning the language.

Due to her distinct African accent, she received a lot of rejections at the beginning of her career. People who don’t know Theron’s background would never realize her foreign roots because she has mastered her American pronunciation so well. Renée Zellweger is an incredibly skilled actress. She’s won Oscars and received numerous nominations for this award. Zellweger always pays attention to detail in every role she takes on. For instance, in “Bridget Jones’s Diary”, she mastered a British accent.

Her performance was so brilliant that she received standing ovations from both viewers and her English colleagues. Despite being born and reared in Texas, a state known for its distinctive way of speaking, she was able to achieve her aim. Keira Knightley has been dubbed “one of the world’s most beautiful ladies” numerous times. People are worried about her body form, which some describe as “sickly slim,” while others describe it as “boyish.” Knightley is so happy with her body that she refuses to have her images retouched for magazines. Frances McDormand, one of the most astonishing modern superstars and the Coen brothers’ muse, appreciates natural beauty. Even for the Oscars, the actress doesn’t disguise her gray hair and doesn’t wear any makeup. Many fans admire her for her boldness. Reese Witherspoon has proven herself to be not just a good actor but also a successful producer throughout the course of her many years in Hollywood. Witherspoon founded her first company in 2000, and in the subsequent 20 years, she has produced numerous award-winning films and television shows, including “Legally Blonde”, “Gone Girl”, and “Wild” (all of which were nominated for Academy Awards), as well as projects like “Big Little Lies”, “Little Fires Everywhere”, and “The Morning Show”.

In 2021, Witherspoon sold a portion of her Hello Sunshine company, which she founded, for $900 million. However, she did so not out of a desire to live luxuriously, but rather to be able to create more high-quality content. Angelina Jolie is willing to go to any length for her career. Most of the time, the actress declines stunt work, preferring to perform many of the acts herself, particularly the more difficult ones. Jolie herself made daring jumps from a bridge onto a moving vehicle in the action film “Salt”. Angelina was undergoing severe training many times a week in order to be able to withstand the intense physical demands.