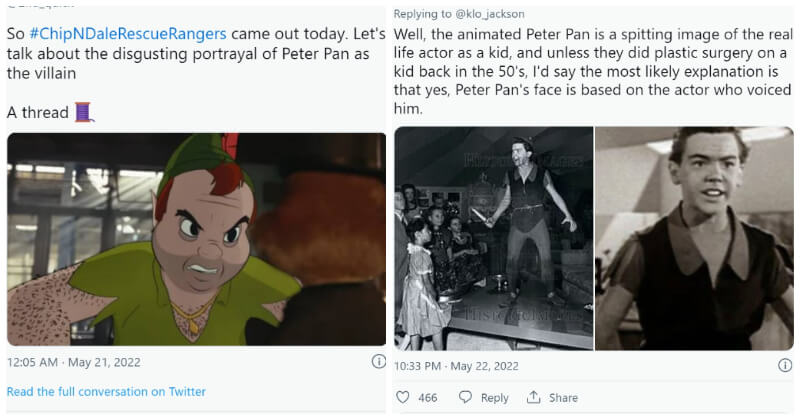 In case you haven’t heard, Disney’s oddest detective buddies, Chip and Dale, are getting their own movie. And fans are living for it. Then they are livid at its unusual nemesis. In the new film, the movie’s villain is an adult Peter Pan. This is innocuous enough until Disney fans realize a parody of a real-life Disney tragedy. More specifically, it’s a reference to the actor who portrayed him years ago.

Anyway, spoilers ahead… proceed at your own risk.

Everyone’s talking about the Disney+ film ‘Rescue Rangers,’ which many see as a spiritual sequel to the iconic ‘Who Framed Roger Rabbit?’ It’s a rare time that human and animation worlds are well-welted together.

There are other self-aware and “meta” Disney cameos, but only one, in particular, is receiving heavy backlash: the boy who never grows up turns out to be the big bad of the movie. The reason: Pan explains why he became evil is the studio kicking him to the curb as he got older.

The backlash stems from how this narrative perfectly mirrors the fate of Bobby Driscoll, the child actor who serves as a live model for Peter Pan. He worked extensively with Disney in the 1940s and 1950s.

Bobby eventually parted ways with the studio, to an awful fate. He died young after falling into drugs and homelessness, being buried unidentified in a pauper’s tomb. According to rumors, Bobby was fired by Disney as soon as he reached puberty and was no longer needed by the studio. Or so people said. Disney appears to be referencing or mocking adult Pan in the new Rescue Rangers film.

People are incensed, as this is extremely disrespectful to utilize Driscoll’s narrative. Whether the producers are doing so knowingly or not. For a few laughs and punchlines in this House of Mouse film, this was still cruel.

Especially when Disney is making light of their own purported past in this dark mythology. You see, some believe Driscoll may have spiraled as a result of how Disney handled his situation. Aside from this cruel parody, fans are saying ‘Rescue Rangers’ is actually fantastically good, and a welcome dose of Disney nostalgia.

That, or it’s a heartless flex from Disney… pick one!