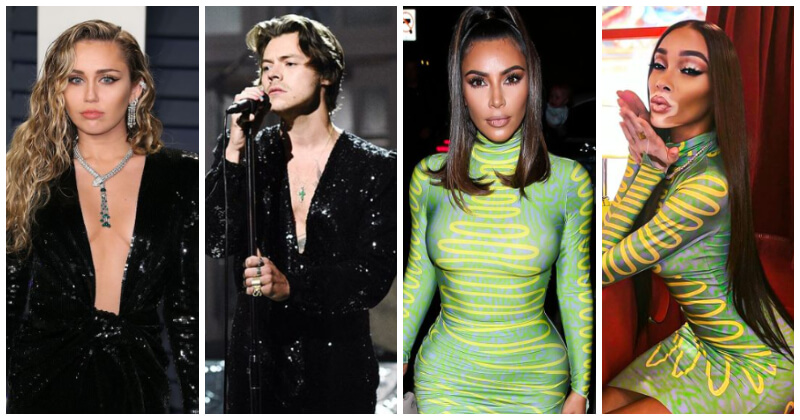 Most of us usually dislike the idea of wearing the same outfit as somebody else, much less a celebrity. However, there are times when famous people do wear the same outfit, although this doesn’t happen often. But when they do, their looks are still brilliant and stunning as always. This proves that whatever they put on, they still attract a lot of attention from the audience and media.

It’s perfectly normal for them to accidentally wear the same outfit as another celebrity. However, famous stars are under constant pressure from the media, so they would normally have to choose their outfit carefully before going out to the public. Most of us may have already known the unspoken rule saying that public figures shouldn’t wear the same clothes twice. This put a lot of stress on these superstars as they have to constantly pick out the unique outfit to wear whenever they go out.

So it is inevitable that there are moments when celebrities wear the same outfit with another without noticing. And this is totally normal! Below are 10 celebrities who stepped out in the same outfit, and still look stunning. In your opinion, who wore it better? Help us decide in the comment section. Sophie Turner wears the same outfit as Taylor Swift 3 years ago on Joe Jonas’ Birthday. Fans were quick to notice that Sophie Turner’s gown had been worn by Jonas’ ex-girlfriend, Taylor Swift, at the 2016 Vanity Fair Oscars. Kendall Jenner wore the same dress Selena Gomez wore in her ‘De Una Vez’ music video. She then deleted a tweet acknowledging her matching moment with Selena Gomez after the pop star’s fans deemed it “shady” and “petty.” Jennifer Garner wore a stylish blue Roland Mouret dress to the ceremony of her star on the Hollywood Walk of Fame on Monday, which she attended with friends and family.

Meghan Markle also wore this gown for her final public outing as a single lady. When Meghan and her mother arrived to Clivedon House Hotel ahead of her wedding to Prince Harry, she was seen wearing it.

#4 Cara Delevingne and Georgia May Jagger Cara Delevingne is known for her own style, but it seems that she occasionally seeks help from her friends before flashy red carpet events. The 22-year-old was seen wearing the same edgy black gown that Georgia May Jagger wore to the 2014 Met Ball. A bright yellow leopard-print Versace coat is one way to stand out, and Katy Perry and Jackie Aina both wore it. For an appearance on Jimmy Kimmel Live! in March 2018, Perry wore the jacket over snakeskin tights, while Aina went bare-legged for the People’s Choice Awards later that month. On the left: In summer 2019, the SKIMS founder Kim Kardashian rocked a skin-tight mini dress in a lime green color, with bright yellow zig-zag design.

On the right: Winnie Harlow with the exact same dress as Kim, picture was taken on her Instagram account. Here, we have the two actresses wearing the same menswear inspired tuxedo by Saint Laurent. Miss Jolie wore it when she attended the 2014 BAFTAs, last January, meanwhile Emma Watson wore it during her appearance at the ‘Late Show with David Letterman’, on March 25th On the left: Miley Cyrus goes braless beneath a shimmering black dress at the Vanity Fair Oscar party in 2019.

On the right: Harry performing ‘Lights Up’ on SNL, November 16, 2019. During his stripped-back performance of Lights Up, Harry subtly referenced the song’s music video by wearing a black version of the navy sequin Gucci jumpsuit he wore on the beach in Mexico. On the left: Kate Middleton let loose in a polka dot dress by Alessandra Rich with a playful slit and matching Smythson clutch. The look was (literally) buttoned up, but still offered a discreet hint of skin.

On the right: Abigail Spencer wearing the same dress at the Royal Wedding in 2018. On the right: Katy Perry, seen at Good Morning America to promote American Idol out and about for Celebrity Candids. New York, NY, USA. 4th Oct, 2017. If Philipps’ gilded Christian Siriano ball gown at the Emmys looked familiar, it’s because she previously wore it at the L.A. premiere of I Feel Pretty earlier this year. The actress wears a cool rock tee beneath her baby blue Sandro suit, while the reality star ditches the shirt entirely in favor of a bra top. On the left: Stepping out to the premiere of the new documentary American Meme, Nicky Hilton lived up to her stylish reputation in an eye-catching green and white dress by Valentino. On the right: Charlize Theron kicked off the promotional tour by walking the red carpet for the ‘Gringo’ premiere at L.A. Live Regal Cinema in LA. She was dressed in the same SPRING 2018 COUTURE ensemble by CHRISTIAN DIOR. On the left: Sofia Sisniega from the serie “Aqui en la tierra” attends the Closing Ceremony and “Safe” screening during the 1st Cannes International Series Festival at Palais des Festivals on April 11, 2018 in Cannes, France. On the left: Anne Hathaway’ made a guest appearance on Jimmy Kimmel Live! on Monday (January 14) while wearing the iconic Giorgio Armani Fall 2018 suit.

On the right: Barbara Palvin, also in Giorgio Armani suit at the Oscars after-party in 2019 On the left: Hillary Scott of Lady Antebellum took to the red carpet 2018 Academy of Country Music Awards held on Sunday (April 15) in Las Vegas, Nevada, prior to her performance at the event. The singer wore an Alice + Olivia Olympia

On the right: Kylie Minogue also wore the same dress on the day she released her own brand of rosé wine, April 24, 2018. Although it may seem impossible for us mortals to pull off an all-bling ensemble, it is a quite common among A-list celebs. If you’re a huge Gigi Hadid fan like us, you’ve definitely seen her in a platinum gold Micheal Kors jumpsuit that caused quite a stir in the fashion industry thanks to her impeccable style. The 20-year-old supermodel looked stunning in her all-over diamond attire, but when Jennifer Lopez, 46, wears the same dress, you know it’s business. The Euphoria actress astonished the world with her BET Awards 2021 dress on June 27. She donned the same purple and lime green outfit that Beyoncé wore for her performance of “Crazy in Love” at the 2003 BET Awards as a touching tribute. Kevin Hart, who is recovering from a vehicle accident in September, dressed up as his best friend and frequent co-star Dwayne “The Rock” Johnson. All to troll him for Halloween.