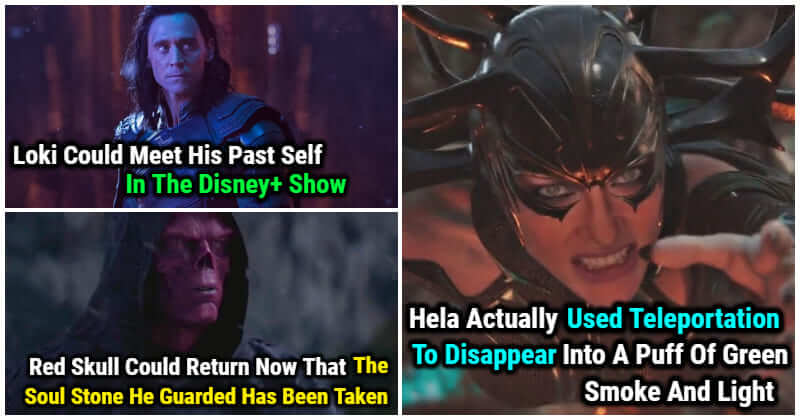 A villain hasn’t indeed passed away until the body is discovered, which may or may not be the case for the Marvel villains on this list. Death is just an intermission in the Marvel universe. Thus any of these deceased Marvel villains might come back to life.

Because the storylines of comic book heroes are never-ending, they are continuously resurrected. A character will die, but a writer will get an idea for that character again five years later, and they will no longer be so dead. The Marvel Cinematic Universe has nearly 30 films, and it is on track to last as long as the comics on which it is based. As more films are released, the writers may feel that some villains were eliminated too soon and want to play with them again. And below are the 16 Marvel villains who would possibly come back soon.

1. Infinity War’s Deceased Loki Could Meet His Past Self In The Disney+ Show Because of Loki’s death in Infinity War, the news of a Loki TV series seemed a little perplexing. The show’s creators have revealed that the TV show would not follow the real Loki, who died in Infinity War, but rather a Loki from a branching timeline created in Endgame after Loki stole the cosmic cube and fled.

This Loki will reportedly travel through time, raising the prospect of a cameo appearance by the original Loki. Loki may hear reports about his great feats in the future if he is traveling.

2. Red Skull Could Return Now That The Soul Stone He Guarded Has Been Taken Red Skull has been linked to the Soul Stone as its eternal protector, as revealed in Avengers: Infinity War. The Soul Stone is then taken by Thanos, leaving Red Skull jobless. Fans were left with a lot of questions, the most pressing of which was whether or not the Red Skull could leave. According to the filmmakers, the answer is: Yes. This sets the groundwork for a scarier Red Skull to appear in a future film, as he now possesses the knowledge he gained while serving the stones’ will.

We’d be negligent if we didn’t cite the comic precedent for Red Skull’s reappearance, as the character has been cloned more times than he has attempted to take over the world (both of which he has done frequently). The resurrection of Red Skull makes a lot of narrative sense right now, because forcing Falcon and the Winter Soldier to face one of Captain America’s greatest villains without his support would be a perfect proving ground for the characters.

3. He Who Remains Already Promised To ‘See You Soon’ He Who Remains’ whole menace is his inexorable passage across time. He’s not just unavoidable; he’s omnipresent in time as a character who will appear in every alternate timeline at some point and, in most cases, aim to conquer those timelines in a hurry.

When Sylvie Laufeydottir thrusts a sword through his heart, He Who Remains informs her that he’ll see her soon, and when Loki comes to the TVA, a statue more closely matching his “Kang the Conqueror” persona is already present. It’s exactly what He Who Remains forewarns against, that his domineering presence was the only thing keeping the other hims at away. You can see Hela vanish into a puff of green smoke and light if you look really closely or view the scene in slow motion. This has led to speculation among fans that she used her teleportation abilities to vanish. And if that’s the case, she’ll most likely show up later to cause trouble for Thor – or the new Jane Foster/Thor.

5. The Grandmaster’s Demise Was Never Shown

The Grandmaster was last seen in the Thor: Ragnarok post-credits sequence after his defeat by Thor and company. The Grandmaster is battling an army of revolutionaries and attempting to talk his way out of being executed in this scene. “Without someone to revolt against, you can’t have a revolution,” he argues.

Because, of course, it’s not going to work and they’re going to throw him out, the situation is funny. However, we never see that on screen, leaving the possibility of a Grandmaster comeback open. Jeff Goldblum’s portrayal of Thor is well-regarded, and fans would welcome a cameo appearance from him in Thor: Love and Thunder.

6. The Collector Is Still Alive, According To Actor Benicio del Toro When the Guardians first encounter Thanos in Knowhere in Avengers: Infinity War, the Collector may be seen alive in the room. Thanos then destroys the Reality Stone’s illusion, revealing that the room has been entirely destroyed and that the Collector has vanished. This appears to imply that Thanos killed him, however Benecio del Toro stated during a press conference that he does not believe the Collector died.

7. Erik Killmonger Could Return In The Ancestral Plane Reddit users have raised concerns over the closing scene’s language. “Is he dead?” Peter seemed to be asking Edith. But then he reconsiders and wonders if “this is real.” Edith responds that no illusions are now occurring. Fans have speculated that this was done on purpose to leave the possibility of a Mysterio comeback open. There’s also talk that Vulture is assembling a Sinister Six made up of Spider-enemies, Man’s and Mysterio would make an excellent addition to that group.

Because Mysterio was not just one man, but a group of people working together to accomplish huge illusions, his crew could carry on his legacy without him.

9. Ultron Could Return Through A Hidden Backup Following the Avengers’ victory over the main Ultron unit in the Battle of Slovakia, Stark declared that none of the drones would be allowed to flee. Stark understood that if only one version of Ultron survived, the entire Ultron universe would be saved. Vision thought an Ultron unit crawling out of the city and into the wilderness was the final one because he could sense its terror. While this may be the case, there’s no reason to accept Vision’s guess as gospel.

10. Arnim Zola Could Have Uploaded Himself To Multiple Computers In Captain America: The Winter Soldier, Captain America realized that SS scientist Arnim Zola was still alive. Zola managed to stay alive by transferring his consciousness to a (very outdated) computer system. He appeared to be destroyed, but if he was intelligent enough to transfer his brain to a computer, he was probably also intelligent enough to keep a backup elsewhere.

“Probably isn’t coming back,” but “might easily have a plausible comeback,” according to Zola. If the designers of Falcon and the Winter Soldier want to pit the combo against some well-known Captain America antagonists, they should start with Zola.

11. Kaecilius Could Return As A Vessel For Dormammu Fans on Reddit speculate that now that Kaecilius is trapped with Dormammu for all eternity, Dormammu may utilize Kaecilius as a vessel to return to Earth. This could be a method to reintroduce both characters while also giving Dormammu a more comic-book-like representation.

12. Taskmaster Was Scooped Up By A Group Of Ex-Widows In Black Widow, Taskmaster’s true desires and desires are never explored. Antonia Dreykov’s journey to becoming a super soldier begins with her father being killed by Black Widow. She is then forced to submit to her father’s mind control and training. She’s too injured to do or say anything beyond “Is he gone?” before being taken away by the recently released Widows when the Red Dust eventually freed her mind at the end of the film.

13. Klaw’s Body Could Be Regenerated By His Arm’s Sonic Powers, Like It Was In The Comics

Klaw is an armaments dealer obsessed with vibranium who frequently interacts with Black Panther and his supporting cast. If you’re a criminal, this is a dangerous bunch to be around, and Klaw was killed by Killmonger.

Klaw can manipulate sonic waves in the comics, and to a lesser extent in the MCU. This power is employed in the comics to transform sound waves into corporeal creations that take the form of people and animals. Klaw’s robotic limb was used to reconstruct a version of himself as a physical creation of sound after he died in the comics. When the Red Skull was defeated by the power of an Infinity Stone in Captain America: The First Avenger, it was evident that he was destined to become dust. This only added to the shock of his return in Infinity War, when he revealed that the stones had been punishing him and using him as a type of protector.

Red Skull’s path appears to be similar to Ronan’s: a power-hungry criminal on the hunt for the stones who meets his fate as a result of their potency. Is it possible that Ronan did not die, but is being utilized by the stones in the same way?

15. Yellowjacket Could Still Be Alive And Trapped In The Quantum Realm During the climactic last battle in Ant-Man, Yellowjacket was gifted his small butt. Scott Lang shrank through molecules to gain access to Yellowjacket’s suit, eventually shattering it and making Yellowjacket vanish. Yellowjacket wasn’t eliminated when that happened, according to Reddit users, because Scott just smashed the regulator on his suit. Yellowjacket shrank down into the Quantum Realm, where characters can exist for long periods of time, as seen in Ant-Man and the Wasp.

16. Ego Grew Back Via Photosynthesis In The Comics

Star-Lord and his fellow Guardians overcome his megalomaniacal living planet of a father by blowing up Ego’s brain in Guardians of the Galaxy Vol. 2. That’s a fairly good way to put someone down for the count, but these movies are based on comic books, so let’s look through a few pages and see whether Ego can make a comeback..

There is, as it turns out. Ego was defeated by Thor and Galactus in the Marvel 616 comic world when the latter sent the living planet hurtling out into deep space. This killed Ego by cutting him off from the sun. The planet stayed dormant for a time, until its carcass drifted into a new solar system. The planet was revived by this new sun, and Ego was resurrected.