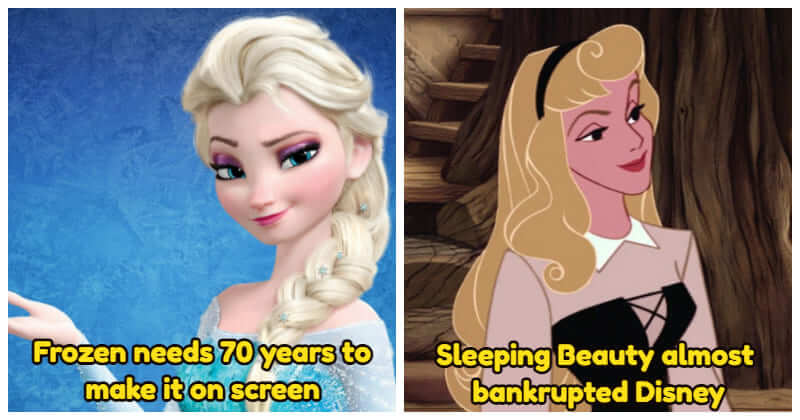 Disney is timeless; for generations, many children grow up watching at least one of the Disney classics.

In their 60 years of existence, Disney is single-handedly responsible for breathing life into many fairy tales, including The Little Mermaid, Snow White, Cinderella, and Aladdin.

But that doesn’t mean we know everything about their behind-the-screen secrets.

When it comes to success, it’s not always smooth sailing for the entertainment juggernaut. A lot of their productions are plagued with setbacks and difficulties during productions. So much so that it’s a miracle some of them even reach the finish line.

Just like any other studio, Disney’s productions have their own history. Even their most successful work encounters great difficulties during their making. Especially for those with massive success.

These 17 fun trivia about Disney classics will prove to you that, Disney’s success doesn’t come easily. Hand-drawn animators have a love-hate relationship with Toy Story, as it is the first computer-animated movie that was feature-length. The movie is a breakthrough in animation and propels Pixar into a worthy match for Disney. Brad Bird had the concept for a superhero family for a long time, but he was hesitant due to it needing a large budget and time to produce. When he proposed The Incredibles to Pixar, the studio greenlit the production, thankfully, and the film won two Oscars.

#3 Snow White and the Seven Dwarfs Snow White and the Seven Dwarfs is a go-hard or go-home situation for Disney. When the costs of the film began to exceed the budget, Walt Disney mortgaged his own house to finance its production. On its initial release, Sleeping Beauty was a flop and almost bankrupt Disney. On its re-release in 1959, however, it was one of the most profitable movies of the year. Cinderella is one of Disney’s biggest successes and magical movies – her dress magically changes was still one of the most iconic animation moments until now. But its production is risky, as Disney was in steep debt. The movie was a success, and the film earned enough to alleviate the studio’s financial concerns. The Jungle Book was originally supposed to have another character – Rocky the Rhino. He was cut from the movie during story development, as Walt Disney feels it might be too overwhelming to have two comedic characters. So, King Louis becomes the sole comedic relief. Disney is famous for doing anything to adapt classic stories that he loves. In the case of Peter Pan, the story caught his attention when saw the performance of J.M. Barrie’s masterpiece when he was young. He even played Peter Pan in one of his school’s productions. Bambi has one of the most tragic openings in all Disney movies. Even Walt’s daughter couldn’t persuade him from killing off Bambi’s mom.

#9 Lady and the Tramp The anthropomorphic dogs in Lady and the Tramp were inspired by those of the writer Springer Spaniel. The story of their adventure was developed by Walt Disney himself. The Little Mermaid is so iconic, it began the Disney Renaissance. Lots of planning go into her details so that Ariel looks different from other mermaids from movies of the same era.

#11 Beauty and the Beast Belle is one of the most independent and strongest Disney Princesses. In Beauty and the Beast, Belle’s personality was based on those of Katherine Hepburn’s Jo March from Little Women. Until Aladdin, Disney produced one Royal Prince after another, but it was the “diamond in the rock” Aladdin that broke that mold. He is actually an average Joe compared to the other Disney Princes. Pocahontas got a lot of flasks for taking too much artistic liberty with history. But it is also the first Disney romance to feature an interracial couple. The Lion King was a surprising success for Disney. Unlike other Disney stories until then, The Lion King was not based on any other works. It was also in production at the same time as Pocahontas.

#15 The Princess and the Frog The Princess and the Frog is Disney’s final hand-drawn animation. It also featured Disney’s first black princess, Tiana. Many stars were in talk to voice the monumental princess, including Alicia Keys and Beyoncé, but Anika Noni Rose ended up winning the role. Moana’s creators want to be as faithful to the Polynesian region’s culture when making the movie. They went so far as to form a team of anthropologists, navigators, and haka practitioners, among others, for the movie. This was the beginning of the organization Oceanic Story Trust It took 70 years for the story of Frozen to make it to screen. Disney has wanted to adapt the story of the Snow Queen by Hans Christian Andersen the first time he heard it, but the idea never went anywhere.

You Would Never Have Guessed These 22 Actors Played These Roles