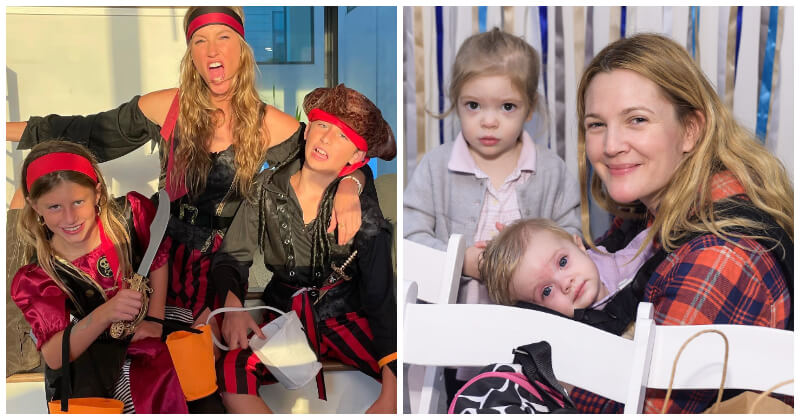 In the celebrity world, ladies with beautiful faces and attractive shapes always earn the spotlight. That means they also have a thriving career with massive opportunities, and also a huge number of fans. From that, they can also possess a flashy life that many others covet.

Be that as it may, there are some leading ladies in showbiz who opt to step back from their careers to stay with family. Even when their career is at a high peak that gives them the glitz, the fame, and especially the money. For them, the family should take precedence over anything else. So they’re ready to let go of their successful and glamorous life to give their loved ones the best possible life.

There’s also a reason for that: Life as a celeb is too busy to spend time with others. They’re on the road all day, all night to have their next release. To certain people who have kids, it’s a big deal as they don’t have enough time to take care of their children. In this post, we break down 12 famous beauties who put their career on a hold to devote to their families. Christina Aguilera – the voice of a generation melted million hearts. However, she put touring on hold for 10 years. The reason is that she wants to devote time to her kids. She admitted that it’s hard to balance motherhood with her ever-evolving career. That made many fans of her sad. But meanwhile, she was active as The Voice coach. For her, that was stable for her kids compared to a touring schedule. Cameron Diaz was all the rage in the 1990s and 2000s, yet she decided to quit her career in 2018 to focus on her family. In July 2017, the star of There’s Something About Mary stated that traveling for filming makes her exhausted. The last time she starred was in the 2014’s adaptation of ‘Annie’, in which she played Hannigan.

Since Diaz got married to the musician Benjamin Madden in 2015, she has switched focus to her family and personal life. The actress has a two-year-old son, Raddix Madden, whom she wants to keep out of the spotlight, as she stated in an interview with Kevin Hart on the talk show Hart to Heart in 2020. After succeeding with “Buffy The Vampire Slayer”, Sarah Michelle Gellar hasn’t starred in many movies or TV shows. She opted to focus primarily on voice acting to have time to spend more time at home with her family. The actress has two children: Charlotte -12 years old, and Rocky – 9 years old. 8 years have elapsed since Eva Mendes’s last movie – Lost River. Meanwhile, she devoted herself to family. Yet she by no means quit acting. In 2020, she answered an Instagram follower that she wanted to set an example for her girls, so there are some roles she won’t do. That limits her choice, but she’s fine with that. Elizabeth Hurley was a big-name actress in Hollywood, yet she had 6 years absent from her movie career, from 2004 to 2010. Meanwhile, The Austin Powers star focuses on her only son – Damian Hurley, who’s now also a well-known actor. In an interview with SiriusXM’s Radio Andy, Drew Barrymore shared that she decided to make a pause in her acting career after her two daughters — Olive and Frankie — were born. She wants to raise them herself without hiring a nanny. The last film Barrymore starred in was 2020 The Stand In, directed by Jamie Babbit.

Yet she doesn’t absolutely disappear. She starred in Netflix’s Santa Clarita Diet for three seasons until its cancellation. Currently, she is working on The Drew Barrymore Show, where her distinct point of view and mocking of her career has gone viral. She also states that she’ll consider returning to acting when her children get older. We all know that the Gray Antonym TV series made Katherine Heigl famous. But for the actress, it’s an obstacle to taking care of her children due to her hectic work schedule. She eventually took a vacation from work and subsequently departed the series for good. One of the world’s most famous models – Gisele Bündchen also says goodbye to her career to have time for family. The Victoria’s Secret mainstay, runway regular, and Olympic icon decided to put a pause on her modeling career in 2015. Meanwhile, she emphasized that she will not be retiring, but rather will continue her job off the runway and spend more time with her family. While at the summit of career, Jessica Alba opted to quit. The actress and entrepreneur attributes her career shift to a mental switch she experienced after the birth of her daughter Honor in 2008. She has since had two more children, Haven, 9, and Hayes, 3, and says that becoming a mother inspired her to do “something bigger.” The House of Cards actress did not hesitate to put her acting career on hold in order to spend more time with her children while Sean Penn pursued his own successful career. She stated that she had always wanted to be a mother and she put her children before anything else. So, when one parent is at work, the other should look after the children. After becoming a first-time mother in 2004, Gwyneth Paltrow took up fewer acting roles. Thereafter, she decided to quit her acting as she found herself more comfortable when not in front of a camera. One of her most successful roles is in 2019’s Avengers: Endgame. The actress, who co-starred in the film Never Been Kissed with Drew Barrymore, took a break from acting after the birth of her second child. Currently, she paints a lot and lives an ordinary mother’s life: she buys milk, cleans things, reads baby blogs, worries she disciplined her children incorrectly, and so on.