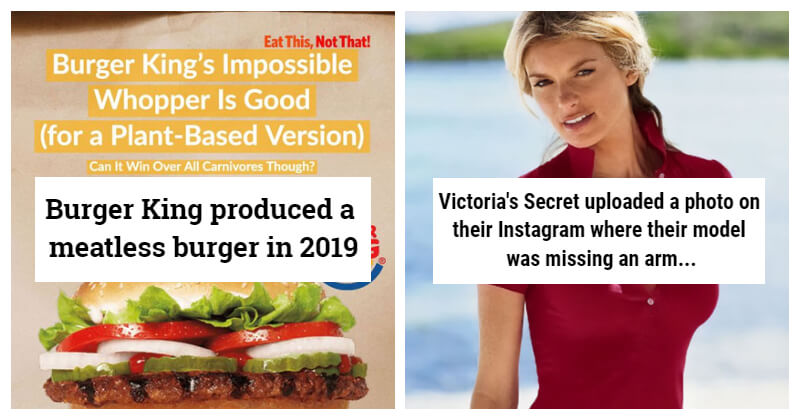 Look, the youths didn’t have enough experience to get hired at your ad company, so your ads are going to miss the mark. What exactly did you expect? These ads companies obviously know something but when it comes to being relatable, they just fall short. One marketing mistake can make or break any brand these days. Competition is fierce and if a brand doesn’t (or accidentally doesn’t appear to) align with a customers’ values, there could be major consequences. We’ve compiled some of the worst brand fails so that you don’t make the same in your marketing campaigns. They will leave you embarrassed with how racist some of the most famous brands can get.

#1 In 2017, a passenger was dragged across the aisle of a United Airlines flight. The cause of this was the flight was overbooked and when no one voluntarily chose to leave, they randomly selected someone to give up their seat. The passenger refused to leave and security was called. They forcefully grabbed the passenger and dragged them off the plane. This left the remaining passengers disgusted and they tweeted about the incident which led to United Airlines having to make a public apology and compensate the passenger #2 Lipton tea created a buy one, get one free deal. The problem with this deal is that every box had a free coupon which created a loophole where customers could get an endless supply of tea #3 P&G received a lot of backlash after their Mother’s Day ad that incorporated a woman cleaning and the slogan stating “This Mother’s Day, get back to the job that really matters.” #4 Bacardi received a lot of backlash for their slogan stating: “Want to look better this summer? Get your hands on the hotness-boosting accessory now: An ugly girlfriend!” #5 In 2021, Burger King decided to tweet out “Women belong in the kitchen.” This happened to be on International Women’s Day. They received a lot of backlash from Twitter users pointing out that the tweet was sexist. They then replied to the backlash by stating that ‘they wanted to encourage women to take up a culinary career.’

#6 In 2019, Burberry found themselves facing controversy after their fashion show featured a hoodie with a noose attached to the hood. A model that walked in the show called out the brand on social media stating that “[taking your own life] is not fashion”. After receiving a lot of criticism online, they responded by writing a public apology stating that the item was insensitive #7 The mortgage company better.com organized a Zoom meeting with 900 of their employees. The CEO announced that those 900 employees were all being terminated, stating that if you’re on this call, you’re part of the unlucky group that has been laid off. The footage of the meeting was posted online which showed employees crying and being shocked by the announcement. The CEO received so much backlash that he had to take time off to reflect #8 Dolce and Gabbana found themselves receiving a lot of backlash after creating a shoe that stated ‘thin is gorgeous’. This angered a lot of fans who tweeted that it wasn’t a responsible message and it didn’t support inclusivity of all body types. The brand showed no remorse by responding: “Next time, we’ll write ‘love to be fat and full of cholesterol.’” #9 A fat-free version of Pringles was produced and was successful until customers reported stomach cramps. This was because the ingredient used as a fat substitute actually had a laxative effect #10 Domino’s faced backlash after their employees filmed and uploaded a series of videos with them shoving cheese up their nose and wiping their body with cloth meant for cleaning. After it went up on YouTube, millions of people watched it which resulted in the CEO seeing it as well. The employees ended up getting fired and charged with felonies for food contamination #11 TRESemme received backlash after creating a campaign that featured different hair types with titles at the bottom labeled ‘frizzy and dull’ and ‘dry and damaged’ where the two photos of the blonde hair are labeled ‘normal hair’ and ‘find them flat.’ The advertisement ended up getting cut as many people were outraged and labeled TRESemme racist and extremely insensitive #12 The fashion company Oh Polly set up a competition for NHS workers where the winner would receive a care package and clothing for a virtual party. When the winner couldn’t attend the event because they were working a 12-hour shift, Oh Polly retracted the prize. The winner was obviously upset and tweeted about it which created outrage among Twitter users. This resulted in Oh Polly having to apologize and give the winner their prize

#13 In 2016, Samsung had to stop all sales of the Galaxy Note 7 after customers reported that their phones were overheating and catching on fire. Samsung reacted by sending out multi-layered fireproof boxes with packing instructions #14 In 2020, Singapore Airlines launched a campaign called Flight To Nowhere. They planned to do three-hour-long flights where passengers could enjoy a meal in the sky with a view. This received a lot of backlash from environmentalists as the flights had no purpose for travel. Singapore Airlines responded by changing the campaign to dining in a plane parked on the tarmac #15 Victoria’s Secret uploaded a photo on their Instagram where their model was missing an arm. When their followers started calling them out on their Photoshop, they quickly deleted the post #16 McDonald’s created a Twitter campaign encouraging followers to use the hashtag #McDStories to share an experience they’ve had with the company. The problem with the campaign was that it left Twitter users posting their McDonald’s horror stories, with some of their stories consisting of fingernails and hospitalization

#17 In 2013, EHRs conducted a random food test on IKEA Swedish meatballs and found traces of horsemeat. This was reported back to IKEA and they reacted by doing a mass recall. The horsemeat scandal had massive repercussions as a lot of customers were hesitant to eat at IKEA after that #18 US Airways found themselves in controversy after tweeting a p**nographic image to a complaining customer by accident. The photo was up for an hour before they removed it. They ended up having to make a public apology and stated that they would investigate the issue #19 Dolce and Gabbana launched three short videos on social media to promote a runway show they were having in Shanghai. The video incorporated a Chinese woman trying to eat Italian dishes with chopsticks while a voiceover tried to teach her how to eat. This received a lot of backlash for being racist, and the video ended up getting taken down within 24 hours. The drama wasn’t over yet though, as Stefano Gabbana got exposed for calling China a country of ‘five poo emojis’. Gabbana claims that his account was hacked and they both ended up having to make a public apology #20 Burger King produced a meatless burger in 2019 called the Impossible Whopper. They marketed the burger to be an alternative option for vegans and vegetarians. The problem with the burger was that it was cooked on the same grill as the meat patties which removed the option for vegetarians and vegans to even eat the burger. But some customers did eat them without knowing, which resulted in Burger King being sued for misleading their customers This Boy Was Bullied For His Halloween Costume, And His Mom Made Impactful Posts About This

23 Times When The Proverbial Stuff Hits The Fan

20 Weirdest And Wildest Reasons People Got Their Nicknames

18 Hilarious Kids Who Were Born To Beat The System

20 Brilliant Shopping Bag Designs That Will Tickle Your Fancy

25 Delusional Notes From Bad Bosses That Can Drive You Mad

Ridiculous Fashion Fails That You Can’t Stop Laughing At

25 Humorous Neighbors Who You Wish You Lived Next To

“Idiots In Cars The Series”: They’ll Just Give Driving License To Literally Anyone