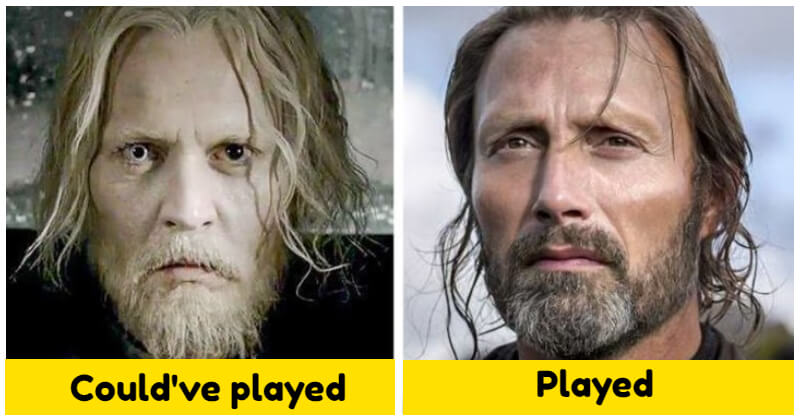 Certain iconic movie characters are inseparable from the actors who played them, so we may not imagine other actors portraying those parts. For instance, imagine someone else apart from Daniel Radcliffe as the main character of Harry Potter, or anyone other than Tom Hanks playing a simple man with a low IQ but good intentions in the “Forrest Gump“.

It turns out that many famous film roles could have been played by different actors if everything went according to plan. Although every casting decision is vital to the movie’s success, we can’t help but wonder what could’ve happened.

Here are 14 actors playing iconic movie roles but a new star stepped in.

#1 Johnny Depp vs Mads Mikkelsen — Pirates of the Caribbean Johnny Depp played Gellert Grindelwald in two previous Fantastic Beats movies but he was removed from the new film just one week into production. Mads Mikkelsen was brought in to replace Depp. When Fantastic Beasts: The Secrets of Dumbledore was released, Mads Mikkelsen received a lot of compliments for his role. It turns out he is remarkable in the role and far more effective than his predecessor Johnny Depp. It is said that “Queen’s Gambit” is the most-watched limited series in Netflix’s history. Elliot Page was originally supposed to star Beth Harmon, a child chess prodigy in the film adaptation but she refused the chance. Eventually, the character was portrayed by Anya Taylor-Joy. Ryan Gosling revealed why he was in the adaption of the blockbuster novel “The Lovely Bones” due to his weight. He said that he and Peter – the director of the movie had different ideas of how the character should look so he left the movie. He was fired almost immediately in favor of Mark Wahlberg. It’s difficult to imagine anyone other than Emilia Clarke embodying the Mother of Dragons on Game of Thrones but actually, the character was first played by Tamzin Merchant. Merchant didn’t play the character because she hadn’t been excited about the prospect of the role in the first place. John Boyega was suggested to play Eggy’s Unwin in Kingsman: The Secret Service but eventually Taron Egerton got the part. Matthew Vaughn, the director of the film recalled a “tough call”: “Boyega is a fabulous actor, but there’s something about Taron. You have to listen to your instincts about who that role is.” Source: © Fantastic Beasts and Where to Find Them / WarnerBros, © Harry Potter and the Chamber of Secrets / WarnerBros

The Oscar-winning Theory Of Everything actor, Eddie Redmayne revealed that he could have appeared in “Harry Potter and the Chamber of Secrets” but his audition for the role was turned down. “I actually auditioned to play Tom Riddle while I was at university. Redmayne told Empire “I properly failed and didn’t get a callback.” Fortunately, Tom Riddle was embodied by actor Christan Coulson.

#8 Olivia Wild vs Margot Robbie — The Wolf of Wall Street Source:© Her / WarnerBros, © The Wolf of Wall Street / Paramount

Olivia Wild auditioned for the role of Naomi Lapaglia, Jordan Belfort’s wife in “The Wolf of Wall Street” but was rejected. The reason for her failure was being “too old”. She was told upfront she was considered too “sophisticated” to play the Duchess of Bay Ridge. Finally, the actress getting the chance to play this character is Margot Robbie. Millie Brown shared that she wasn’t fazed when she auditioned for “Logan” with Hugh Jackman. She discussed how she prepared to audition and consider herself the best audition. However, she was rejected and Dafne Keen got the role. For many people, Freddie is the king of the teen film but he could have landed the role of Spider-Man if Tobey didn’t beat him out. During the audition, he talked to Venom instead of Spiderman for 25 minutes. Director Raimi thought Freddie wasn’t excited enough to play this role so it went to Maguire. Although Jennifer ended up in legendary young-adult film series, she auditioned for the leading role, of Bella Swan in Twilight. She confessed that she had no idea about this role and eventually Kristen Stewart portrayed the character. Emma Roberts received recognition for her roles in the Nickolodeon teen sitcom Unfabulous, Scream 4 and We’re the Millers but she still lost the part of Katniss in “The Hunger Games” to Jennifer Lawrence. In an interview with Vanity Fair, Miles Teller revealed that he was initially set to star as Sebastian in “La La Land” but director Chazalle changed his mind and decided to go with Ryan Gosling. Despite his failure, Miles Teller was pretty happy and he believe that everything happened for a reason.

#14 Johnny Depp vs Margot Robbie — Pirates of the Caribbean