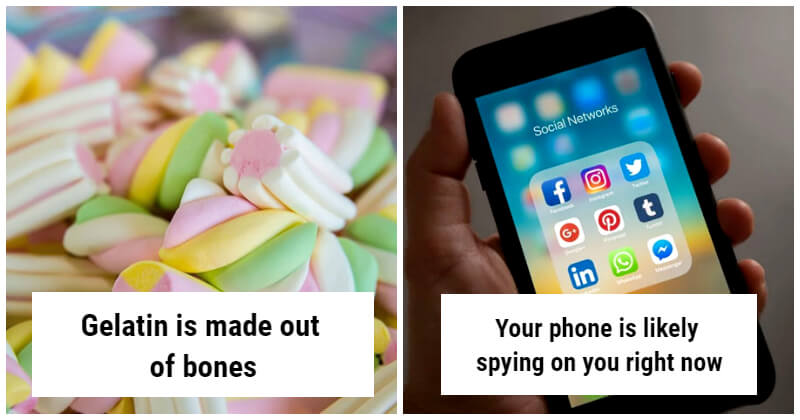 Scary facts are facts that inspire fear, terror or shock. If you’re here, you likely enjoy being frightened or weirded out. Maybe scary things just don’t give you goosebumps. Maybe you can look at bugs crawling over a body all day and not feel itchy and uncomfortable. You might even find Halloween things funny. If so, congratulations: You’re a freaking psychopath. Just collecting these scary facts and interesting trivia scared us straight. They are guaranteed to send a shiver up your spine. Use them to scare your friends and frighten your family! Which of these haunting facts is your favorite? Is the fact that you’re probably being spied while reading this or there are still six undiscovered nuclear weapons?

#1 Sharks have been around for at least 420 million years, meaning they have survived four of the “big five” mass extinctions. That makes them older than humanity, older than Mount Everest, older than dinosaurs, older even than trees. Yet we could potentially see them extinct in our lifetime #2 If a biological trait is common in almost every human, then it evolved for a reason. Almost everybody has the same response to the “uncanny valley,” or in other words we are made uncomfortable by things that look almost human but not quite. This implies humans once had a reason to fear something that looks human but isn’t #6 Maximum part of oxygen came from sea/oceans. But people always talks about protecting trees not sea/oceans #8 Cotard’s syndrome, also called “walking corpse syndrome,” is a condition wherein the patient believes they are dead, dying, missing parts of their bodies, or don’t exist. Some people with Cotard’s syndrome may stop speaking or eating since they believe they’re dead #10 The entire planet could be immediately destroyed by any one of a number of cosmic events that we have no way of seeing or stopping like rogue black holes. Worse…there are some events we can very much see coming, but do absolutely nothing about #12 Yellowstone is a giant super volcano. If it blows, things on this planet will go really bad really fast #13 Chimps don’t attack to kill. Instead they aim for the genitals, face, and fingers and will leave the opponent alive. There have been many people who have owned chimps who have turned on their owners and left them incredibly disfigured. One case, the chimp ripped a man’s junk off. In all cases, faces were mutilated and fingers were chewed off. It’s pretty much how they instinctively fight in the wild. So if you think that chimp is going to be a cute pet, better think twice. Even if you raised it since it was born, they’ll turn on you at any second. A disfigurement roulette waiting to happen. Vile creatures #14 If given access to it, butterflies will happily drink blood #15 idk why this freaks some ppl out, but gelatin is made out of bones. That’s right – your melted marshmallow in your hot chocolate is melted animal bone. It’s good stuff. #19 Your eyes have a seperate immune-system from the rest of your body. Once your body’s immune system discovers you have eyes, it will attack and inflame the blood vessels in the back of your eyes. This can lead to your vision decreasing or even going blind 20 Deceiving Photos That Make People Doubt Their Own Eyes

20 Things So Huge They Made People Afraid