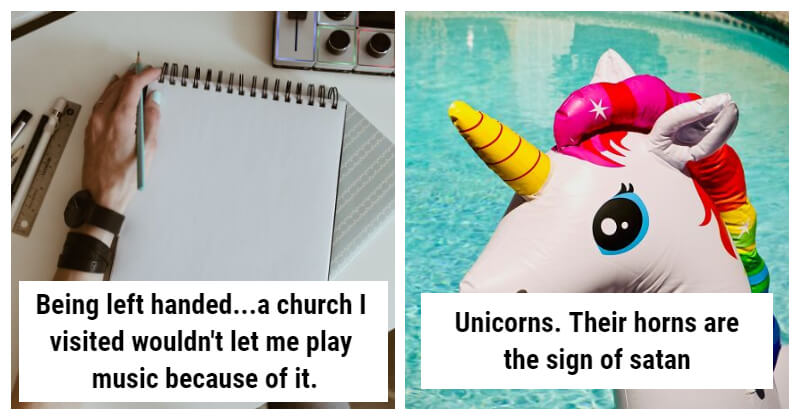 Satanism has been around for as long as Christianity itself. Well, when something cannot be explained by anyone, by anyway, it must be the devil pulling the tricks. Science is, apparently, irrelevant to these people. Americans love a good moral panic. And for some reason, Satanism and pedophilia are at the center of a lot of them. Probably the most famous example of this occurred in the 1980s and early ’90s. There was a wave of outlandish allegations made against day care centers in California and elsewhere. Here are 20 stupidest things that people have labeled to be satanic just because these things cannot be explained in Layman’s terms, which is how most people process information.

#1 The same teacher who taught abstinence only sex-ED class took away my deck of Magic cards because they were satanic. How am I supposed to keep my virginity without my Magic cards!? #2 A toothache. “The devil is trying to enter my body.” Was the quote. Initially i thought they were making a weird joke. They were serious. #3 Rocks. I’m a rock hound, and collect rocks, gems, and stones. The link between crystals and spirituality has gotten me called a devil worshipper…for liking rocks. I don’t even use them spiritually, I just like shiny s**t. #4 Being left handed…a church I visited wouldn’t let me play music bc of it. #5 “Godzilla” because god’s name shouldn’t be used like that. Told his kids there was a spelling error and it’s actually called “Goodzilla”. #6 I knew this Christian lady that refused to eat deviled eggs. Edit: my wife said her cousins weren’t allowed to eat candy on Halloween when they were kids because their mom didn’t want to celebrate the “devils birthday”. #7 Tampons. I’m not joking or lying. When I was a kid, early 90’s, there was a “God Botherer” protesting outside a Superdrug (UK Pharmacy chain) screaming about the Satanism of feminine hygiene products corrupting women into sin. This God Botherer was a woman. #8 I remember a lady saying she refused to eat mushrooms, they were satanic because they grew in the dark. #9 Back in the 70s it was a lot of stupid: bar codes. The little symbol on Proctor & Gamble products. Yoga and/or meditation. Lots of different music by different artists. My small town Christian private school had a particular teacher who was absolutely dying mad about his students’ fondness for Michael Jackson, AC/DC, and other bands of the time. The funniest one of all was dancing. The joke around my (conservative Christian) college in the 80s was that sex was outlawed because it could lead to dancing… for some bizarre reason the administration thought dancing was totally evil. #10 Dark brown eyes. There was this batshit lady at my old church who worked in the youth ministry. She accused my sister of devil worship saying that she had “shark eyes”. #11 Back in the 90’s my family had a home pc. We didn’t have much so this computer was a big deal to my brothers and I. For school work and some good old fashioned DOS games. My dad managed to figure out how to get a screen saver with sound onto the computer, was quite proud of himself too. He failed to mention this screensaver to my mother who is VERY religious. So one day I am sitting in highschool and get called to the principals office mid 2nd period. Now I am a darn near straight A student, who didn’t get in trouble ever. So this isn’t something that has ever happened to me. I get to the office, and I was told my mother called and was very very distraught and I needed to head home to be with her. I hear the secretary telling another office staff that she was losing her mind, and a few variations to that effect. I rush home to find the pastor from church, performing an exorcism on our computer. My mother praying fervently through gasping sobs. The pastor and my mother prayed for sometime, before my dad came home. My dad gets home mad he was called home then he just starts laughing hysterically. Calls my mom a few variations of dumb, goes and wiggles the mouse to bring the computer up and plays the darth vader screen saver he added to the computer. “Give in to your anger. With each passing moment you make yourself more my servant” “I find your lack of faith disturbing.” “You underestimate the power of the Dark Side. If you will not fight, then you will meet your destiny.” You know all the come to the darkside quotes. With a picture of darth vaders face. Of course my mother couldn’t get the computer to do it again because she kept messing with it, and it never went back to sleep mode. So of course her first thought was we had a evil satanic computer possessed by the devil himself. The pastor just quietly snuck out with me during my dads laughing and my moms sobs. #12 Wifi. Because they didn’t understand how it could work without wires. #14 Unicorns. Their horns are the sign of satan. I wish I was making this up. #15 i was once wearing my hat backwards and got called a devil worshipper. #16 A microscope. An acquaintance of mine called a microscope a “gift from the devil” because it makes people question the divine plan.

#17 Without a shred of sarcasm I once heard an evangelical describe hot cheetos as a product of the devil. #18 My dad wouldn’t let me watch anything that had magic or monsters because he thought it would let demons into the house. This included power rangers, Ben 10, H20 just add water, harry potter, scooby doo and more. The most ridiculous one was not letting me watch Jessie on Disney channel. This had no magic or monsters but he thought that the pet lizard one of the characters had represented the snake that deceived Eve into eating the apple. #19 The Lord of the Rings works and The Chronicles of Narnia. Both Tolkien and Lewis were devout Christians. #20 Sporks. I once heard someone say, “The spork is ‘the devil’s utensil’ because it is the amalgamation of the masculine fork and the feminine spoon and is trying to blur gender lines in society.” 20+ Pics That Are Plain Cringey And Sad

20 Hilarious Photos Of Parenting That Will Crack You Up

32 Infuriating Situations That Can Piss Off The Buddhist Monk

20 Dad Jokes That Are So Bad But Actually Hilarious

16 Mildly Infuriating Pics To Test Your Calmness And Patience Level

Wacky WikiHow Illustrations For Your Amusement

27 People Who Can Stop Traffic By How Unique They Look

15 Wives Who Trolled Their Husbands Expertly

18 Hilarious Mannequins That Will Make You Shake With Laughter

17 Accidental Cosplays In Real Life That Are Hard To Believe