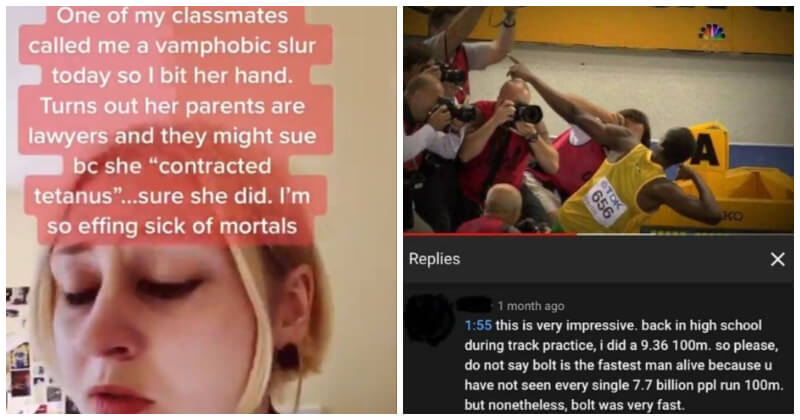 So maybe, just maybe, you don’t feel the need to post anything on your social media to draw others’ attention. That’s really good for you. Many people cannot be satisfied with what they have in life. So they turn to social media platforms and spread lies to make themselves more desirable. Human beings crave attention, or at least most of them do. And what could be easier than making up stories boasting about ourselves to get that attention?

Well, on Reddit, there’s an entire sub called r/ThatHappened dedicated to ludicrous stories that definitely did not happen. People made such posts hoping to become well-known, and yes, they did. Now that the whole internet knows that those people are desperate, stupid liars that crave attention. And what to do when people encounter such addicts? Shame them! Definitely! #2 Grandma must be blind #3 And all vampires clapped… #4 Then the entire high school clapped…. #6 And then he woke up from his dream, just as it was getting good #11 Professor is not qualified for his job #14 Happened the other day in one of my fountain pen groups. Literally, no one called BS. I am disappoint #15 And then all the kindergarteners clapped 20 Anonymous Stories Of The Weirdest Reasons Why Couples Divorced

25 Optimistic People Who Made The Best Of Terrible Situations

People Are Posting Pics Of Hilarious Balconies They Randomly Saw

17 Pics That Will Leave You Scratching Your Head With Questions

26 People Who Mistook ‘Being Cheap’ for Stealing