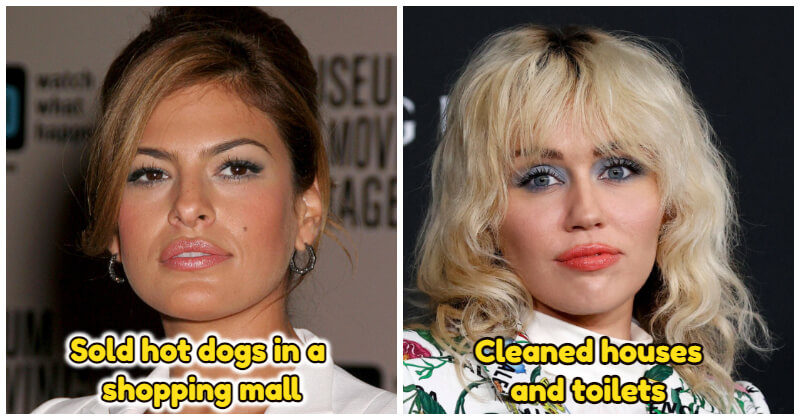 We all view celebrities’ life as some stuff of dreams. They have gigantic houses, fancy cars, and luxury brands. On top of that, they have lucrative careers as famous stars. Their fame gives them everything they want in the world.

Be that as it may, they didn’t have that flashy life from the get-go. Most of them got started with normal jobs, like us. A hot dog seller, a secretary, a teacher, etc. It could be hard to imagine how a glamorous actor works as a hot dog seller, yet it is reality.

There is a good reason for that: The stardom doesn’t immediately fall into their lap. Before hitting the big time, they are just like us – have to pay for rent, utilities, and bills. In this post, we would like to share with you the pre-fame gigs of 13 celebrities. They will actually make your jaw drop. Before becoming a well-known actress, activist, and Calvin Klein model, Eva Mendes worked as a Hot Dog vendor. The 48 years old actress sold hot dogs on a Stick franchise at the Glendale Galleria in Glendale, California. To pay for the study tuition fees, the “master of modern horror” – Stephen King worked as a janitor, a gas station attendant, and an industrial laundry worker in the late twentieth century. The Hollywood star – Steve Buscemi took the Civil Service Exam for the Fire Department of the City of New York (FDNY) when he was 18 and worked as an FDNY firefighter in downtown Manhattan in the 1980s. He later left the service to pursue a career as an actor, yet continues to support New York firefighter issues sometimes. Even longtime fans of Jennifer Lopez may not know her pre-fame job as a secretary. She used to work at a law firm and be on a mission to fill tax returns for policemen and firefighters. She also became a licensed notary later on. Before becoming renowned, the Lost TV series’ star had a variety of odd jobs. One of her most recalled job is flight attendant. But she resigned after a month as it was too exhausting. To cement her acting passion, Lucy Liu worked multiple jobs. She worked five days a week as a secretary. On weekends, she worked as an aerobics instructor. Although it’s an arduous time for her, yet the thought that she worked to support her acting career motivates her. Gwen Stefani was selling ice cream at a fast-food restaurant long before she became a famous singer. She also worked at a department shop as a cosmetics artist. Whoopi Goldberg had a few odd jobs before becoming an actor, including a mortuary cosmetologist. She applied for the position because she is a licensed beautician who attended beauty school. Hugh Jackman worked as a Physical Education teacher at a school in England for a year before playing Wolverine. He was once doing a red carpet interview when he noticed one of his students among the reporters. The actor couldn’t pass up the chance to tease the gentleman. He inquired about his physical education since it was quite important to Jackman.

#10 Kate Winslet — A Sales Assistant At The Grocery Store “Kate Winslet worked in a delicatessen before becoming a movie star. She was once making a turkey sandwich for a customer when she received a call informing her that she had landed a role on Heavenly Creatures. The future Titanic actress was so taken aback that she left her office without completing her sandwich.

#11 Mick Jagger — A Porter At A Mental Hospital Mick Jagger briefly worked as a porter at Bexley Hospital before becoming the frontman of the legendary music band The Rolling Stones. This occurred in 1961 when he enrolled at the London School of Economics to pursue a degree in finance and accounting. Jennifer Aniston worked many part-time jobs before landing her starring role on the Friends television sitcom. Telemarketing was one of her employment. In the Poconos, she was selling time-shares (the right to utilize a property under a time-sharing arrangement). Aniston claims she was bad at it and couldn’t sell a single item. Can you imagine Miley Cyrus in a cleaner uniform? At her 11, she joined a cleaning company and worked as a cleaner to earn a little pocket money. She even used to clean the toilet. And what makes us surprised is that she really loved this job.