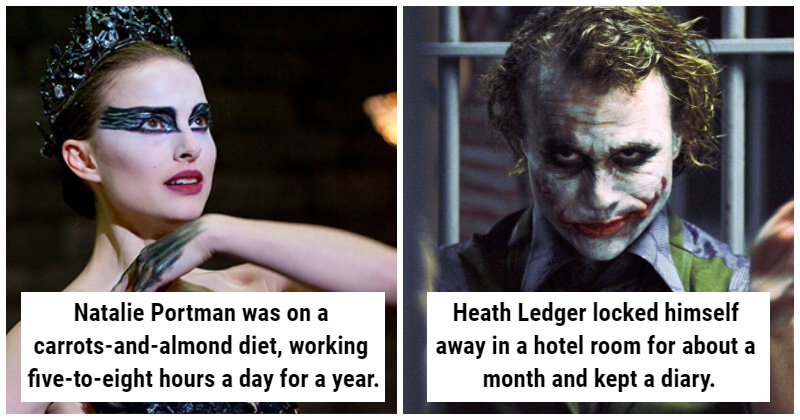 When it comes to acting, some actors take pride in the perfection of their crafts.

Hollywood has tons of stories going around about how famous actors would do everything for a role. Remember Cats? Or Jared Leto and dead rats. Yikes!

This is called method acting. Method acting is a technique in acting that requires the actor to become the character. While some only take small steps in methods of acting, other goes further. This can range from adopting their mannerisms and quirks, to forcing themselves to live in similar conditions as the characters.

Method acting, while brutal, allows actors to truly peak into the mind and hearts of the characters. And their sacrifice for a role paid off, and we are allowed to behold acting masterpieces. Heath Ledger portrayal’s of Joker is still acclaimed even today.

#1 Heath Ledger – The Dark Knight: Self-isolated in a hotel room for about a month. Heath Ledger enjoyed immersing himself in any characters he plays, on every level. To play Joker in The Dark Knight, he spent roughly a month in a hotel room in self-isolation.

During this time, he kept a little notebook and experimented with several voices to find the best one for him. This gave birth to the unforgettable Joker chuckle we all remember. This haunting laugh was heavily influenced by Malcolm McDowell’s role in A Clockwork Orange, as well as hyenas.

#2 Natalie Portman – Black Swan: endured grueling training for her role as a ballerina. For her Oscar-winning performance in Black Swan, Natalie Portman had to lose a lot of weight. Natalie also had to follow an extremely rigorous diet consisting of just carrots and almonds.

Ballet, on the other hand, is more difficult than losing weight. The actress had to spend 8 hours a day in grueling practice. “There were several nights when I believed I was going to die,” Portman admitted. “It was the first time I realized how you could become so engrossed in a part that it might sort of drag you down.”

#3 Daniel Day-Lewis – My Left Foot: lived in a wheelchair. My Left Foot tells the story of an Irishman who was born with cerebral palsy. He could only move his left foot yet was able to become a writer and artist. The role was artfully played by Daniel Day-Lewis, who is well-known for his unconventional preparation for a role.

To prepare for the role, he stayed in a wheelchair for practically the whole filming process. The staff had to feed and move him around; during the shooting, he had only walked once. And it pays off: the actor earned his first of many Oscars for his effort. To play Ray Charles, Jamie Foxx had to go dark, literally. Because Charles was blind, the actor chose to wear prosthetic eyepieces that left him blind for 12 hours a day during filming. Wearing a blindfold throughout these sessions allowed him to experience how much more intense everything sounds when you’re blind.

Foxx also learned Braille and shed 35 pounds to gain Charles’ slim build. He also practiced his piano for 8 hours a day to master it. According to Michael Mann, the film’s director, Tom Cruise’s character is so stealthy that he is able to enter and exit any location without being noticed, no matter how crowded the place is.

As a result, Tom Cruise had to make deliveries in a Los Angeles market to prepare for the part. Judging from a lack of photos of his fans from that market everywhere, it appears his training in the art of clandestine is a success. Robert Pattinson became an international star for playing a glittering vampire heartthrob in the Twilight franchise. However, few took his acting abilities seriously. It took Robert some time to find recognition for his craft.

Just like his character, he chose to live in a basement throughout the production of Good Time, on only necessary amenities. This extended to never opening his curtains, eating only tuna cans, not changing his linens for the whole two months he was there and sleeping in his clothing.

#7 Matt Damon – Courage Under Fire: had to be put under medical supervision. For his role in Courage Under Fire Matt Damon has to lose a lot of weight, to the point of looking skeletal. He went on an intense diet and physical training, jogging 12 miles a day and drinking 4 to 6 pots of coffee to maintain energy. More drastically, he even began to rinse his mouth after his girlfriend kissed him, simply because he could taste the meal she had consumed.

Unfortunately for the actor, he had to drop weight without the assistance of a dietician, so he was placed under medical care immediately following the filming. It took him two years to fully recuperate to his full health and return to normalcy. The filming of Jungle Fever took around 8 weeks. During this time, Halle Berry chose not to shower during the whole filming process in order to better embrace her character.

Despite this being her acting debut, Halle Berry takes it all too seriously. In any case, supporters believe that Samuel L. Jackson, who played her boyfriend, treated the young actress’s determination with great respect and empathy. To prepare for his role in The Doors, Val Kilmer wanted to get to know his character inside out and began to interview anyone who knew Morrison in real life. He also learned all 50 of his songs, despite the fact that only 15 of them were featured in the film. Not to mention the fact that it would all be dubbed in with Morrison’s actual voice.

This paid off handsomely. When The Doors member heard him sing, they couldn’t tell if it was Kilmer’s or Morrison’s voice.