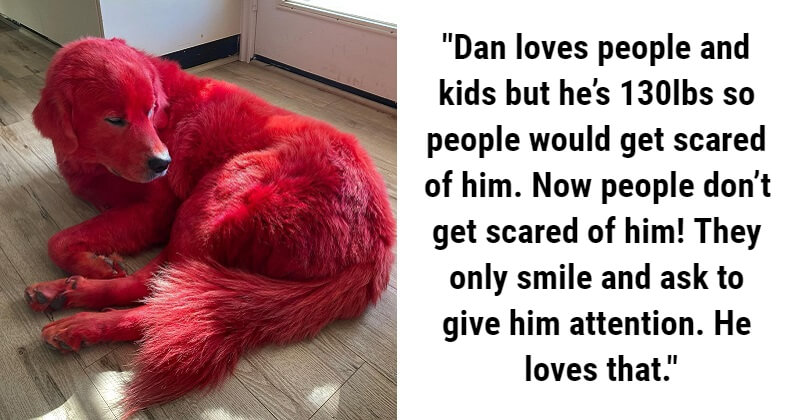 Chloe is a TikToker and a pet owner who owns a Great Pyrenees dog named Dandy. She loves her dog so much and often shares his videos using her account @danthebigreddog. She has an Instagram account, where she often posts Dandy’s pics. Everyone loves Dandy and admired Chloe’s love for her dog until she dyed his fur red. Despite Dandy looking happy in all the videos, many viewers took offence at Chloe’s action and thought it was dangerous for the poor dog. Some even filled her feed with critical comments and accused her of animal abuse.

“Why dye such a beautiful dog different colors, they are not toys to mess around with,” one person said. Chloe had to make a video defending herself and hit back at cruel trolls by explaining exactly why she made the decision. She said that Dandy enjoys the dyeing process and the vegan product she used is not harmful to him in any way. It just makes his fur shiny and soft. The second reason to keep him red was to keep him from getting stolen as he’s a rare breed. In another video, Chloe dueted with another TikTok user who ate some dog fur dye to prove the products are completely safe. She used the products of Opawz, which is a dye designed especially for dog and horse hair. However, there are still many people who don’t agree with Chloe’s action.

One person commented: “Of course it’s cruel, of course it’s abuse, the only good thing is she’s made it clear to the whole world she’s not fit to own a dog I hope the authorities step in.” Another added: “How would she like to be dyed red too? Stupid and cruel woman does not deserve such a beautiful dog.”

“It’s not cute and it’s not funny. It’s blatant animal abuse. What if the dye got into his eyes or damaged his skin? What if he got it in his mouth? I think the owner did this for her own need for attention.”

What do you think about this situation? Tell us your thoughts in the comments below!

20+ Dogs Who Love Playing Hide And Seek, And Their Photos Are Hilarious!

20+ Animals Who Took Laziness To A Whole New Level