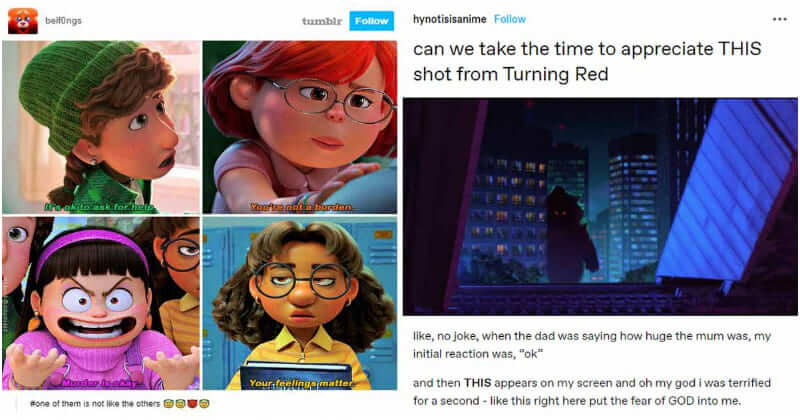 Disney has been on a winning streak. With hit after hit, all of which are great family movies that remain faithful to their cultural settings, their work has enjoyed more love than ever!

The most recent work, “Turning Red”, is also gaining rave reviews from global theaters. From Disney and Pixar studio, Turning Red is about a thirteen-year-old confident math-wiz girl named Mei Lee. Mei Lee has to deal with the villain in most households: her mom’s expectations, and whether to be obedient or her true self.

Whether you have a subconscious overbearing mommy issue or not, this touching tale of self-acceptance and feminism taps will still feel endearing to your heart. Even wanting to post about the movie’s strong message of familial love all over the Internet.

On Tumblr, people are doing just that. Tumblr users usually seem to have unique perspectives on “Turning Red.” From puberty and the difficulties of parenthood, Tumblr users dissected Turning Red frame by Frame, making for some hilarious posts for your day. Let’s take a look!

#1 Mei’s friendship bracelet at school vs at home #2 For our sake, give this animator a raise #6 Not an overreaction, but a parent being a parent #10 One more time for the people in the back #15 An accurate depiction of visiting grandma and aunts… #18 Now this is an overreaction #22 Statements that don’t necessarily cancel out each other