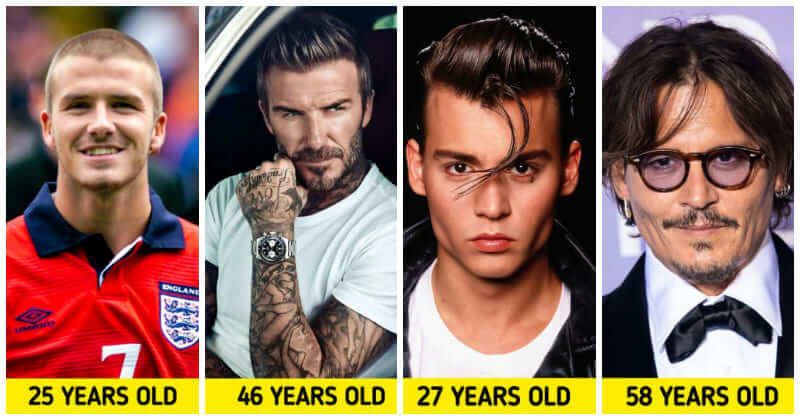 People used to say that: “The only enemy of beauty is time”. Nevertheless, the actors in Hollywood might be the exception. Like a fine wine, these actors and celebrities have defied time and somehow managed to become sexier and more handsome with age. Some of them shared that their secret to aging gracefully was having a healthy diet and doing exercise regularly. Because you know, nothing great ever came that easy so if you want to be like them, get out of your bed and do exercise now! David Beckham is an English former professional footballer who has been hailed as one of the most recognizable midfielders of his generation. He is also known as the dad of 4 pretty children. In 2013, Beckham announced that he would be retiring at the end of the 2013 season to support his family and his children. Despite having retired, he still kept a healthy lifestyle. He shared: “Three or four times a week I walk my daughter to school instead of driving her, or she bikes home with me. It’s the little things that make a difference.” Henry Cavill is a British actor who is famous for the role of Geralt of Rivia in the Netflix fantasy series The Witcher. Beginning his career at a young age, Henry Cavill gained many achievements. People can see his improvements in acting as well as his charm increase with time. His motto is “trying to stay as healthy as possible”. He works out every day, has a healthy diet, and drinks water regularly. No wonder why he has such a great body at the age of 39. Jason Momoa is an American actor and filmmaker who is well-known for his role in Aquaman. Like many other muscle-bound stars, Momoa adopted a consistent diet and workout routine. Some of his hobbies are surfing, skateboarding, and mountain biking. These hobbies at the same time help him work out and build muscles. Ben Affleck is an American actor, film director and screenwriter. He gained wider recognition when he and his childhood friend Matt Damon won the Golden Globe and Academy Award for Best Original Screenplay for writing Good Will Hunting. However, Affleck used to addict to alcohol. He also suffered from both anxiety and depression and has taken antidepressants since age 26. Luckily, Affleck opened up about his addiction and treated his addiction well. It doesn’t matter if you ever had a bad habit as long as you know what time to stop and change yourself. Matt Damon is an American actor, film producer and screenwriter who ranked among Forbes’s most bankable stars. Damon began his acting career early in 1988. Throughout his career, he has acted in various films and gained numerous awards. He also followed a healthy diet and strict fitness regime. That’s why at the age of 49, he still looks handsome as he did when he was younger. Nick Jonas is an American singer, songwriter, and actor. He began acting at the age of seven and released his debut single in 2002. Began his career at a young age, Jonas had been in Hollywood for over 20 years. Nevertheless, Jonas also suffered from some health problems. At the age of thirteen, he was diagnosed with type 1 diabetes and used an insulin pump to help him manage his condition. Acknowledging the consequences of diabetes, he has developed and supported various medical centers to encourage young people to manage their diet and lifestyle. Jake Gyllenhaal is an American actor who is famous for his role in the film Spider-Man: Far From Home (2019). He is a talented actor who began his career at a young age. Gyllenhaal has a good workout and a healthy diet. He loves eating lots of steamed vegetables and salad and hates fast foods. Jared Leto is known for his method of acting in a variety of roles and received numerous awards throughout his career. The Joker actor has rarely been out of shape for the past two decades. He shares that two things that have kept him shredded for 20 years were eating vegan and taking care of himself. That’s why at the age of 50, he still looks amazing. Hugh Jackman marked his breakthrough role in the X-Men film series (2000-2017). During his career, Jackman has succeeded in various genres and received a host of awards. To prepare for each role, Jackman had to work out a lot and kept a healthy diet. It seems like this 52-year-old actor never gets older and even got better with age. Christopher Meloni is an American actor who is known for his television roles in the legal drama Law and Order. Blessed with a blue eye, and brawny looks, Meloni easily grabbed audiences’ attention. Even having retired from acting, Meloni seems to grow sexier with age. Chris O’Donnell is an American actor and former model. He started his career in numerous commercials as a teenager. However, he also struggles to make healthy lifestyle choices in his everyday life like every normal person. Having to film 14 hours a day and take care of five kids at home, he tries to find time and have a healthy diet. He also plays a lot of beach volleyball and does yoga. Johnny Depp is an American actor, producer, musician, and painter. In the 2000s, he became one of the most commercially successful film stars by playing Captain Jack Sparrow in the series Pirates of the Caribbean. However, Depp has struggled with alcohol for much of his life. In 2013, Depp declared that he had stopped drinking alcohol and got out of it. As time went by, his appearance and acting skills still surprised many people. Brad Pitt is an American actor and film producer. He has been cited as one of the most powerful and influential people in the American entertainment industry. He is also considered the world’s most attractive man by various magazines. At the age of 57, he still looks amazing and attractive. He is regarded as one of the world’s highest-paid actors and throughout his career, he has received various awards. Everyone knows that Tom Cruise is famous for his excellent acting skills and good looks. At 58, he is still a superstar and a good-looking actor. Leonardo DiCaprio is an American actor and film producer who has been placed eight times in the annual rankings of the world’s highest-paid actors. Besides his talented acting skill, people also envied his eternal youth. It seems like the older he gets, the better he looks. George Clooney made his acting debut on television in 1978. Later, he gained wide recognition for his role in the medical drama ER. Throughout his career, he has gained various awards and accolades. Clooney has worked hard to get his slim and fit body shape. No surprise at the age of 60, he is still in incredible shape. Michael B. Jordan is known for his film roles as shooting victim Oscar Grant in the drama Fruitvale Station. In 2022, Jordan was named on the list: “People’s Sexiest Man Alive”. With brown skin and a stunning smile, he has caught a thousand hearts. Robert Downey Jr. has evolved into one of the most respected and talented actors in Hollywood. With an amazing list of credits to his name, he has managed to stay new and fresh even after over four decades in Hollywood. To keep fit, he practices yoga and Wing Chun Kung Du three to four days a week. Zac Efron began acting professionally in the early 2000s and rose to prominence in the late 2000s. In early 2013, Efron struggled with alcoholism and substance abuse. Luckily, he has been sober since Jun 2013. Although he is just 34 years old, people can see he has grown up more handsome and mature compared to his first day in Hollywood. Chris Evans is an American actor, voice actor, director, and producer. He made his acting debut as Jake Wyler in the 2001 teen comedy Not Another Teen Movie. Later, He gained wider recognition for his portrayal of Captain America in several Marvel Cinematic Universe films. After approximately 20 years in Hollywood, he still looks handsome and amazing.

12 Actors Who Were Way Older Than The Characters They Played, Yet Nobody Noticed

9 Actors Who Are Incredibly Bad Kissers, According To Co-stars