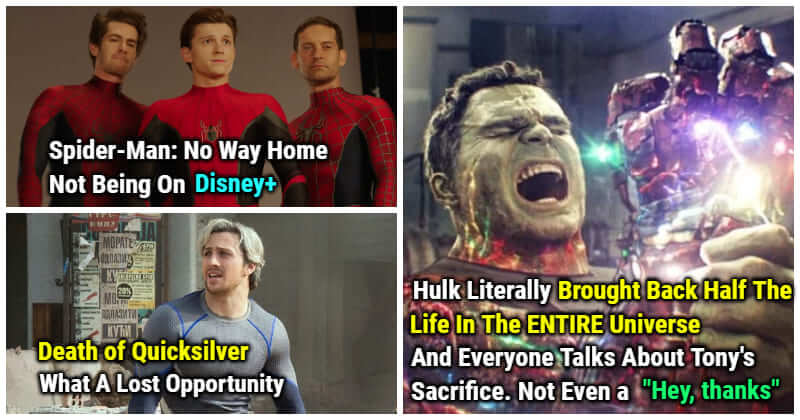 Throughout nearly 30 movies, Marvel has concreted their position and success in the movie industry. They almost nailed every single step in making a movie, from successfully creating the storyline and the ups and downs in the movie to incredibly mastering cinematic effects. It is understandable why they have gained countless awards as well as positive reception from the audience.

But as the old saying goes, no one is perfect, and Marvel is not an exception. They still give fans the disappointments, from Thor and Captain America not being able to say goodbye to heroes who died much too young. Below are the 16 most disappointing moments in Marvel movies that can irritate you.

1. Black Widow only getting her movie after her death From Kanden_27: “Black Widow only getting her movie after her death”

From Vegetable_Price5537: ” “And the movie in general being about ANOTHER world-ending agency that hasn’t been mentioned in 20 years despite being absurdly dangerous and having mind-control and super soldiers instead of a backstory movie where Natasha meets Clint.”

2. “Rest In Peace The Warriors Three”

From v_OS: “Hela killing the Warriors Three and Thor forgetting their existence.”

“They glossed over many of the emotional beats in Ragnarok. Thor’s dad died, we get like 5 seconds of mourning. The Warriors 3 die, not a single response or comment on it. Thor’s entire home blows up, nothing but a joke about it. Even Loki, who Thor thought sacrificed himself at the end of the movie, never got anything from Thor except a joke.

Luckily the Russo Brothers showed in the Infinity War that Thor just covers up his pain with humor.””

3. Death of quicksilver. What a lost opportunity “No matter what, Quicksilver ends up dead. Which honestly sucks because I loved his character, but I wish they would’ve built a bigger relationship and storyline with his character before we see him go.”

4. We Don’t Actually Know What Happened On Xandar? “Not seeing Xandar being destroyed in Avengers: Infinity War, but instead seeing Thanos with the power stone already.” “Spider-Man not being on Disney+”

6. Bucky Is Much Cooler, To Be Honest

“That Bucky went from being this feared badass super-soldier to someone who just stands in the back and shoots his gun.” “Thor not having a final conversation and farewell with old man Steve by the lake before he leaves off-world with the Guardians. Would have been such an emotionally poignant scene with the 2 remaining members of the original ‘Big 3’ reminiscing and saying goodbye, especially at the close of the Infinity Saga.”

“Not once did this scenario cross my mind but now I’m annoyed that we never got it.”

8. Hulk Deserves More Respects From Others “Hulk literally brought back half the life in the entire universe and everyone talks about Tony’s sacrifice. Not even a ‘Hey, thanks.'”

“Banner seems pretty humble. He could’ve given Tony the credit. or maybe it’s because Tony actually did more of the work than Banner did in the whole thing. It was ultimately Tony that helped make the quantum particles function and Tony that made the infinity gauntlet work. Banner was just the guy to pull the trigger.” “It was so nice having a bad guy that actually enjoyed what he was doing! Plus with him being an arms dealer, which is bad, but not Ultron/Thanos level bad he could’ve easily just popped up here and there…. Shame….”

10. The Shortage Of The Raft

“They have the Raft and they use it to house the Avengers mainly, while killing off so many good villains they could easily put there.” “Since we are going with disappointing and not infuriating, I will say Bucky getting a cool new arm from Wakanda…and then using a gun in the last 2 films.” “Why did Gilgamesh have to die?”

“I assume for emotional impact – he was shown to be very kind and understanding (being Thena’s caretaker), so losing that stability is supposed to hurt. He’s also one of the only Eternals that didn’t get all upset and storm off to do their own thing, so he’s very well-liked (by the audience).”​​​​​​​ “I was so disappointed we didn’t really get a satisfactory conclusion to Bucky and Steve’s friendship. Steve basically gave up everything for him multiple times and it went nowhere.”

“The way they wrote Bucky to say go on and not be a part of the conversation. Just an awkward way to go out IMO.” “Sharon Carter going to the dark side.”

“They’re basically turning her into the MCU version of Viper.” “Under usage of Mads Mikkelsen.” Didn’t even get his Bird.”