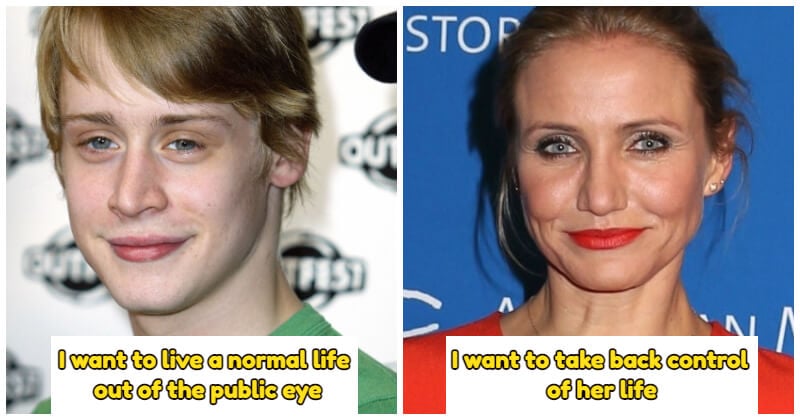 While making it big in Hollywood might be a dream for a lot of people, some actors figured out it wasn’t for them and retired way earlier than we expected. Actors quit acting for a whole bunch of reasons. Some just realize that life isn’t for them, some simply discover a new calling in life.

For example, Elizabeth Hurley stopped acting to raise her son. She wanted to fulfill her duties as a mom so she loved totake him to school every day. We also can talk about Meg Ryan. Although she was making a lot of money, she decided to step out of the spotlight. She realized that her heart wasn’t in it. Her decision was to go back out into the world to figure out who she was being in relationships to other things and other people and other environments

If you are curious about the reasons the stars put an end to their acting career, scroll down to see. Mara Wilson was considered one of the foremost child actors of her generation after her starring roles in ‘Mrs. Doubtfire” and “Matilda”. However, the child actor gave up her career when she was only 13 years old. She explained that she didn’t want to deal with painful scrutiny about her appearance in Hollywood. She shared: “I realized, I don’t fit their idea of what a Hollywood actress looks like, so there’s no room for me here.” Angus T. Jones started acting at the age of four, with encouragement from his mother. He was at one time the highest-paid child actor for his role in “Two and a Half Men”. After over a decade on the show, he announced to end his acting career at age 23, and now Frankie Muniz’s acting career started in 1997 and he’s had roles ever since. The bulk of his acting career ended in 2006. This was when the landmark show “Malcolm in the Middle” finished, of which he was the star. He’s gone on to have a career in racing, music, and entrepreneurship. Now, Malcolm and his wife own Outrageous Olive Oils & Vinegars in Old Town Scottsdale. “It’s the only thing we have time for. But we love it,” he said. Cameron Diaz first took a step back from the spotlight in 2014 and four years later, she announced that she quit acting. She said she wanted to take back control of her life. In an interview with Gwyneth Paltrow, she shared: “I know a lot of people won’t understand it. But it’s so intense to work at that level and be that public and put yourself out there… you have no time for anything else…I had to basically take it back and take responsibility for my own life. That’s my job.” Daniel Day-Lewis decided to retire from acting when turning 60 and the news came as a shock to fans. He was immensely grateful to all his collaborators and audiences over years. When he was asked why he made the decision, he said: “All my life, I’ve mouthed off about how I should stop acting, and I don’t know why it was different this time, but the impulse to quit took root in me.” Macaulay Culkin rose to prominence as a child actor, starring as Kevin McCallister in the 1990 classic Christmas comedy, Home Alone. However, he retired from acting at 14 years old because he wanted to live a normal life out of the public eye. The Home Alone star is now CEO of a pop culture podcast and website called Bunny Ears. In 2017, Freddie Prinze Jr confirmed that he would leave the acting world. After stepping back from acting, he returned to the culinary profession and released a cookbook called Back to the Kitchen, with which he collaborated with his wife, Sarah Michelle Gellar. Bruce is one of the most prolific actors of the 90s and throughout his extensive career, he has gifted us with many cinematic gems. After being diagnosed with aphasia, he decided to retire from acting.