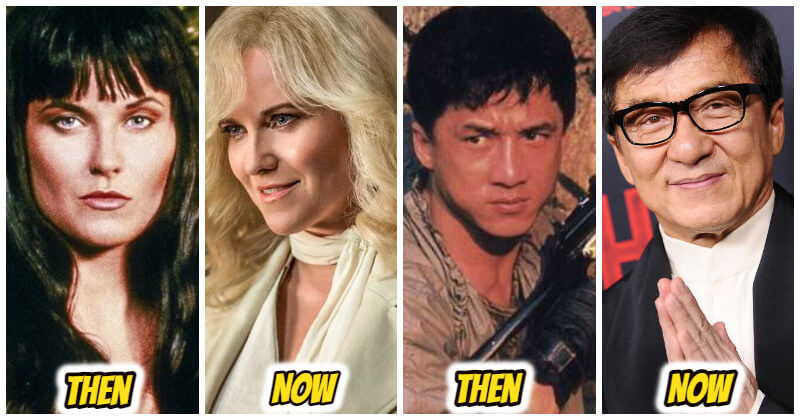 Before the age of Marvel and DC comic superheroes, with their very extensive universe and multiple sequels, the age of heroism on the silver screen was made by a very different generation of heroes.

These heroes are not multibillionaires with super cool gadgets and battle armors or enhanced humans with superpowers. They are just badass guys who… kick asses. Like, a lot of them. With their fists and knuckles. Doesn’t that sound cool?

Once upon a time, we were obsessed with heroes, because of how mortal they are. This gives us the hope that with discipline, we can also be as powerful, courageous, and legendary as them. And ripped. Don’t forget ripped.

Some of them do wear capes, so the difference isn’t that much.

Well, dazzling CGI look fun and all, but nothing beats an old fashion badassism from these 16 movie heroes. Just look and see for yourself. The famous Greek hero was brought to life on the screen by the hunky Kevin Sorbo. The demi-god son of Zeus and Alcmene, and the world’s strongest man, he champions for mankind against the disasters, both natural and supernatural.

Hercules: The Legendary Journey was the closest thing to a superhero we had at the time. With many powers, including super-strength, divine perception, and even immortality, Hercules is the ideal superhero for us 90s geeks. Before Gal Gadot’s Wonder Woman, we have Xena. For six years, Lucy Lawless plays the warrior princess to perfection, including her iconic war cry. And formidable fighting skills. And her battle armor, which makes her the female warrior most 90s were dreaming about.

Xena is arguably one of the best redemption stories on 90s TV. In Xena: Warrior Princess, Xena is on a mission to atone for her evil past by utilizing her tremendous combat abilities to assist others in perils. Xena’s companion, Gabrielle, is also one of the strongest female characters of the 90s. The bard-turns-Amazon-queen uncanny ability to talk her way out of frightening or difficult situations remains her most charming quality. As the series progress, we see her transform into a very capable warrior herself.

Gabrielle, who initially is a small town bard, becomes Xena’s greatest ally, best friend, and soulmate. She yearned to leave the dreary and drab village. She first sees Xena as a means of escaping the banality of her life, embarking on adventures. Her naiveté and chatty disposition served as a counterbalance Xena’s negative outlook. The immortal Duncan MacLeod wanders the world in pursuit of companionship and adventure, having been trained in battle, survival, and sword-fighting by his elder cousin Connor and others.

A Clan MacLeod member, Duncan MacLeod realizes he is an immortal, a person born with the power of the Quickening This means he can’t die unless he’s decapitated, and he can absorb the strength and knowledge of the other immortals he beheads. And vice-versa: others immortal can do the same to him. This sets up some of the most intense fights in 90s TV history. In this film, Chan came the closest to death: in a stun, he leaped onto a tree from a ledge, but the branch he gripped snapped, sending Chan plunging and cracking his skull. But the movie becomes the best-earning Hong Kong movie of all time, so I guess it is worth the fall. In the show, he is a former Marine and modern-day Ranger who believes in the Code of the Old West. He is also a Vietnam veteran and martial arts specialist. So you know the man can hit. A devout Christian, Walker is devoted to his friends and family, going above and beyond to assist them when they are in danger. Their first meeting was during a riot: Trivette was ambushed and nearly murdered while trying to quiet the mob, but was saved by his future partner. Walker’s harsh personality makes their early relationship tough, and Trivette worked hard to earn his respect and trust, but they later become great friends. Well, you are likely more familiar with Antonio Banderas’ rendition of the character, but Zorro was first played by Duncan Regehr. The debonair masked swordsman Zorro has mad swordsmanship, and whip skills that put Indiana Jones to shame.

When the commandant of Los Angeles terrorizes and oppresses the residents of the town, Diego de la Vegacomes establishes the hidden persona of El Zorro: The Fox. He and his muted servant, Felipe, wins against the commandant’s tyranny every time with skills, wit, and charm. Jean-Claude Van Damme played Luc Deveraux, a former US soldier who was KIA in the Vietnam War, but resurrected as part of a covert military operation. With his memory erased, he discovers his background and flees with a young TV journalist while dodging assassination attempts from the villainous Sgt. Andrew Scott.

Jean-Claude Van Damme played the character to perfection. He goes from ruthlessly killing machines to perplexity after breaking out of his conditioning, to regain his humanity. He also shows considerable skill in hand-to-hand combat and proficiency with weapons. In other words: he’s great at punching and shooting. Dolph Lundgren portrays the psychotic megalomaniac Sgt. Andrew Scott. How psychotic? He kept his victims’ ears on a necklace around his neck. While we love to hate him, Andrew Scott’s skills rivals that of Luc Deveraux, making him an equally terrifying UniSol.

Despite all UniSols being supposed to have zero emotions, Andrew Scott still shows joy when using excessive force or when killing, even going against orders to do so. This is a result of his profoundly twisted sense of patriotism and duty. John Rambo is such an iconic character, that the name “Rambo” refers to a lone wolf who is irresponsible, disregards commands, resorts to violence to solve all issues, enters risky situations alone, and is unusually harsh, callous, raw, and violent. Rambo embodies the American men in the Reagan years.

Sylvester Stallone played the character so well that he is critically acclaimed for this character. John Rambo is regarded as a cultural figure. In the 1980s and 1990s, the persona impacted several action heroes and films. Rambo is “a Vietnam War soldier portrayed as macho, self-sufficient, and hell-bent on vengeance.” Officer Alex James Murphy, commonly known as RoboCop, is a cybernetically-enhanced Detroit Police Department officer from Murfreesboro, Tennessee, with a fierce sense of duty. So, he is essentially a cyborg, which is like radically cool on all levels.

Graduated at the top of his class from the police academy, Alex Murphy is a devout Irish Catholic and a mild-mannered family man, living with his wife, Ellen, and son, Jimmy. RoboCop Alex Murphy is the ideal father and husband for all his fans. Darcy Walker is a cop by day, but by night she transforms into The Black Scorpion to fight crime and supervillains in Los Angeles. Darcy is ready to deliver justice her own way, thanks to her loyal friend and mentor, Argyle Sims, who gives her gadgets and modifications for her scorpion mobile. When we say Terminator, we mean the T-800 model. One of Skynet’s robots designed for infiltration-based surveillance and assassination operations, the Terminator is actually a cyborg made out of organic flesh over a robotic endoskeleton.

The T-800 was played Arnold Schwarzenegger, the giant actor-turn-California-governor. As a robotic T-800 gradually learns to express emotion, we have a very human-machine, that faithfully protects the leader of mankind until the last minute. Linda Hamilton played Sarah Connor in the first 2 Terminator movies. She is so dedicated to the part her eardrum was blown when shooting a scene.

Since her first film, the character evolves from a timid damsel in distress trope into a wanted fugitive committing terrorism, a hardened warrior and mother who sacrificed everything for her son’s future and is on the verge of losing touch with her own humanity, and a mentor preparing and protecting a protégée for her destiny. The Mask, or Stanley Ipkiss, was played by Jim Carrey during the height of his comedic days. The bank teller is a meek, inexperienced, and unfortunate bank employee at the local Edge City bank, whom everyone around regularly mocks.

But that stops when he puts on the green wooden mask, which then transforms him into the reality-defying The Mask. With his zany and borderline insane tricks up on his sleeves, the Mask is the champion for the underdogs.

#17 Walker meets Hercules and his son Well, if the Greek hero ever meets the Texan ranger, it would probably look something like this.