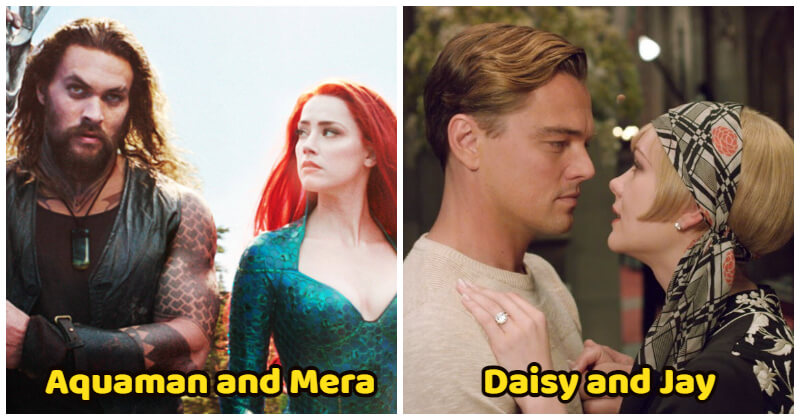 Chemistry can be defined as a complex emotional or psychological interaction between two people. It can cause a couple to feel passionate and attracted to one another. Therefore, it becomes an essential criterion for casting actors in a movie, especially when they are romantically entangled.

However, real chemistry is tough to fake. Not all actors are capable of evoking strong emotions and convincing us that they have a special affection for or are in love with their on-screen partners. They just don’t get along in real life or their eyes aren’t for their partners. No matter what the reason is, the lack of chemistry between the main characters can spoil the impression of a flick.

Here are 10 onscreen couples who had absolutely no chemistry. Keira Knight and Aaron Taylor Johnson were criticized for missing passion in the movie. Keira Knightly is lovely to look at but there is no chemistry or anything to grab onto with her lover. In a scene, Karenina and Vronsky were dancing and the people surrounding them freeze for no reason. One viewer said, “I have never seen a worse meeting depicting love at first sight. How can he be looking so indifferently at her? And Keira’s look is as indifferent as his.” Leonardo Dicaprio and Carey Mulligan have good acting techniques and exceptional talent. However, in “the Great Gatsby”, the two actors have little chemistry and mostly have no memorable scenes that stick in viewers’ minds. In the “Matrix”, fans find no attachment between Trinity (Anne Moss) and Neo (Keanu Reeves). A fan even wrote: “Neo had more chemistry with Morpheus” or another one commented: “They looked more like brother and sister” or “I was really surprised when she said she loved him. They didn’t confide in each other, they didn’t even act like friends.” Parker and Watson’s love story is one of the most beautiful in superhero films. However, Tobey Maguire and Kirsten Dunst failed to convey the deep love that is supposed to exist between their characters. In fact, they seemed more like good friends. The only scene that satisfied fans might be when Peter is hanging upside down and kissing Marry Jane.

Although the main characters were played by two talented Christ Pratt and Bryce Dallas Howard, viewers didn’t feel any chemistry between them. No one seemingly imagined that they fell in love and became a couple at the end of Jurassic World”. A viewer said: “That kiss could not have been more awkward and wooden.” Many people felt disappointed about the DC movie “Aquaman”. They wanted to see some chemistry between Mera (Amber Heard) and Aquaman (Jason Momoa), but even the underwater CGI kiss lacked conviction. For some viewers, looking at the coupling of two actors was more boring than watching paint dry.

Although Jim Carrey and Zooey Deschanel looked good together, it wasn’t enough to make fans believe in their love. One fan shared: “When it came to intimate stare-downs, you just get the feeling that both of them want to leave the room as soon as the camera stopped rolling.” Josh Hutcherson and Jennifer Lawrence, the talented actors, portrayed Peeta and Katniss respectively but they failed to show any onscreen chemistry. The author of the column said: “Sorry, but there’s zero romantic chemistry between the leads. Katniss looks at him more like a lost puppy than a potential lover.” In “Harry Potter and the Deathly Hallows”, the love story between Ron and Hermione is pretty weak. A fan said: “Just me or the Harry and Hermione dance sequence had more chemistry than all the Hermione and Ron scenes combined?” and a commenter answered: “Hermione and Ron never had any chemistry, books or films. The only thing they have in common is their friendship with Harry.” It is easy to see the lack of chemistry between Jon (Kit Harington) and Daenerys (Emilia Clarke), especially when compared to the only other romantic relationship Jon had. The fact that Harington (Jon Snow) and Rose Leslie (Ygritte) fell in love with each other on set played a big role here. It’s hard to overcome the “chemistry” between Harington and Leslie especially when you know that it was real.