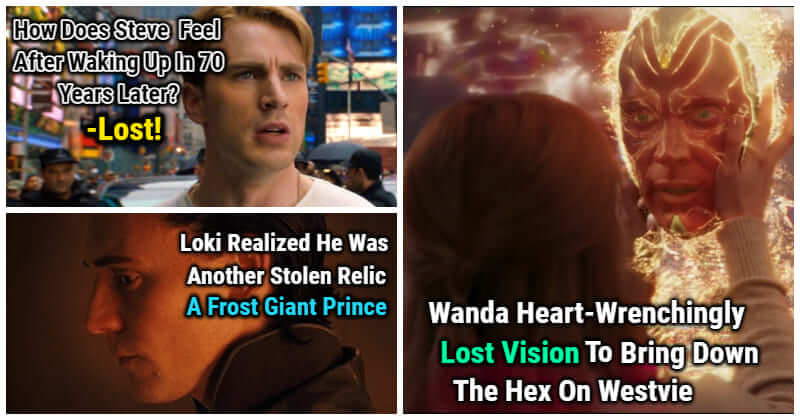 Multiple factors bring success to Marvel movies. From top-notch Hollywood actors, actresses, and cinematic effects to some hilarious dialogues from characters, they all assist MCU in leaving good impressions on the audience. However, there is an omission unless we mention the storyline and other human emotions, specifically, sadness.

Thanks to having the ups-and-downs storyline, they could give the audience various emotions, therefore doing wonders for their movies. The aspect that we want to mention in this post is the downs. Throughout nearly 30 movies, Marvel characters have experienced various tragedies even without death, such as when Wanda said goodbye to a version of Vision Before bringing down the Hex on Westview, or Loki realized he was ‘Another Stolen Relic’ when Odin told him his true heritage. And below are the 14 most heartbreaking non-death misfortunes of Marvel characters.

1. Wanda Heart-Wrenchingly Lost Vision To Bring Down The Hex On Westview

Unfortunately, part of Wanda’s existence in this universe requires her to virtually enslave all of a town’s residents in order to use them as pieces in her perfect life. This is plainly not acceptable, and by the end of the series, Wanda understands her folly and decides she must quit the charade. Unfortunately, part of letting go includes saying goodbye to the Vision she created. Until the very end, the two lovers embrace one other.

Both are hopeful that they will be able to see each other again. But, for the time being, they must say their goodbyes, and Wanda must leave the ideal life she has created for herself.

2. Loki Had To Watch His Life Played Out Loki had to witness how the remainder of his life should have gone after being taken from the timeline for being a variation. This is excruciating for Loki, who has to witness a lifetime of mistakes and failures. It’s difficult to witness this character who has won the audience over fall to emotional difficulty because he rarely expresses feelings other than rage or irritation.

Loki must then address the question “What now?” for himself. What does one do when they discover that they are a failure?

3. Loki Realized He Was ‘Another Stolen Relic’ In Thor, Loki attempts to prove himself to his father by devising a plan to make Thor look bad and transform himself into Asgard’s hero. Loki confronts Odin about his true lineage along the journey. Loki realizes he is a Frost Giant prince, which confirms his worst fears and makes him stressed out.

Loki starts yelling at his father, who he truly really wants to love. Loki rants about how he’s always felt second best to Thor and how he’s nothing more than a stolen relic held captive until his so-called father needs him.

4. Rocket Revealed He ‘Didn’t Ask To Get Made’ In An Argument With Drax Gamora rushes into a pub to witness Drax fighting Groot and Rocket in Guardians of the Galaxy. Drax is held back by Gamora, but Rocket is still standing with his enormous weapon, ready to take out Drax or anybody else in the bar who insults him. Rocket then gets drunk and rants about how everyone is always laughing at him and how he didn’t ask to be made. He tells how he was repeatedly taken apart and reassembled in order to be experimented on.

He now considers himself a monster and resents the fact that everyone views him as an animal. It’s a sobering look into the mind of a character that is usually comic relief but is now revealed to be the psychologically disturbed survivor he is. Steve Rogers is eventually shown talking to Peggy in the present in The Winter Soldier. It’s almost beautiful that the two are able to reunite at all. But it’s understandably difficult for Steve to witness Peggy’s life without him. Peggy is also suffering from memory loss, thus their talk concludes with her being perplexed and reliving the agony of seeing Steve for the first time. She’s glad to see him, but she recalls the tragedy of their separation and how long it’s been since she last saw him.

Even if they’ve finally been reconciled, Steve’s memory loss shows the bigger suggestion that maintaining a friendship with Peggy will be much more difficult for him.

6. Captain America Let Bucky Barnes Brutally Thwack Him Til He Remembered Who He Was

Bucky Barnes’ life is tragic even greater than Steve Rogers’. Sure, Steve has been separated from his true love for decades. But Steve did get to live a normal life and be a hero in the present. Bucky is kidnapped by Hydra spies, experimented on, and transformed into an assassin who is only awakened long enough to kill his targets.

Despite his baggage, Steve has an unwavering devotion for his comrade, as he demonstrates in his final confrontation with Bucky in Winter Soldier. Steve decides to quit fighting because he believes Bucky still has some redeeming qualities. Bucky then pushes Steve to the ground and continues to punch him in the face. Steve, however, does not fight back.

7. Hawkeye Just Missed His Family During The Time Travel Test For one simple reason, Lucy snatching the football away from Charlie Brown is an iconic element of pop culture. It’s because Charlie has hope every time he kicks the ball. That hope makes the sadness even more difficult to bear. That’s why it’s so terrible to watch the scene in which Barton uses time travel to almost reconnecting with his family. Barton’s daughter is snatched away from him just as he is about to see her again.

He returns to the Avengers Compound with a heavy heart, but there is still a glimmer of faith that things will work out.

8. Nebula Said Why She Hated Gamora Nebula has escaped Thanos in Guardians of the Galaxy Vol. 2, but she is still bound by her hatred towards Gamora as she pursues her. This results in the two of them fighting to the death, with Nebula eventually exposing the source of her animosity.

As it turns out, Nebula has always felt like the inferior sister and has never been able to measure up to Gamora. Every time she lost a battle to Gamora, Thanos would improve her physique with cybernetics, making her life a living hell. Nebula’s animosity grew even stronger after Gamora left because she felt deceived.

9. Captain America And Iron Man Eventually Found Themselves On Contrary Ends Of A Fight When Tony Stark learns what the Winter Soldier did to his parents, he directs his rage on Captain America, one of his closest friends and allies. Stark asks Cap one question, “Did you know?” with tears in his eyes. Because Steve Rogers knew, a brutal fight begins. Stark understands that fighting will result in nothing positive, but he’s too enraged to care.

10. Hulk Though The Earth Is Safer When He Went Out Of It While Hulk assists in the defeat of Ultron, there is a noticeable shift in him after the battle. After the battle, Hulk is left alone on a Quinjet. Black Widow tries to calm him down, but he looks to have found what Banner had discovered before. The Hulk has no place on our planet. As a result, this “mindless” beast goes off into space to be alone.

11. How Does Steve Rogers Feel After Waking Up After 70 Years? – Lost! Steve Rogers wakes up in a hospital room that appears to be from the 1940s at the end of The First Avenger. Steve, on the other hand, is far too astute for that, and he quickly recognizes he’s in some kind of ruse. So Steve escapes, fights his way past guards, and lands himself in today’s Times Square. Nick Fury himself appears and asks if he’s all right. Before responding, Steve takes a moment to collect himself “Yeah. I had a date, after all.”

Steve’s anguish is palpable and relatable in this scene. He’s been given a second chance at life, but he’ll have to make do without spending it with the one he loves most.

12. Peter Parker Lost His Suit And Trust Of Tony Stark It’s not easy to become a hero, especially while juggling heroics and high school. Peter unintentionally endangers a ship full of civilians after ignoring Stark’s orders and refusing to drop a case, and he needs Iron Man to save him. This is followed by a harsh sequence in which Stark tells Peter that it’s time for him to give up the suit for good.

13. Peter Parker Knew How Much He Had Upended Liz’s Life After The Homecoming Dance

The fundamental battle in Spider-Man: Homecoming comes to a bittersweet conclusion. Spider-Man defeats the Vulture in the face of insurmountable odds. But, with the Vulture as his homecoming date’s father, things aren’t going so well back at school. Liz is enraged at Peter for standing her up and believes he doesn’t care about her after they finally reunite.

Liz also confesses that she needs to relocate to avoid her father’s trial. Peter then has to watch as his first love walks away, tears in her eyes, saying she hopes he figures out what’s wrong.

14. Tony Stark Lost And Got Betrayed From His Old Friend – Obadiah

After an attack on his life, Stark becomes a terrorist prisoner and begins his career as Iron Man. He then constructs a suit and comes home. This is a watershed moment in Stark’s life, as he recognizes that his firm must stop producing weapons of war, and he also builds a small arc reactor to keep shrapnel out of his chest.

Obadiah, Stark’s last remaining father figure, eventually paralyzes him and confesses that he is not only the mastermind behind the terrorist attack on Stark’s life, but that Stark’s subsequent deeds have further fueled his rage. Before leaving his young protégé to die, Obadiah adds salt to the wound by comparing Stark to his own father.