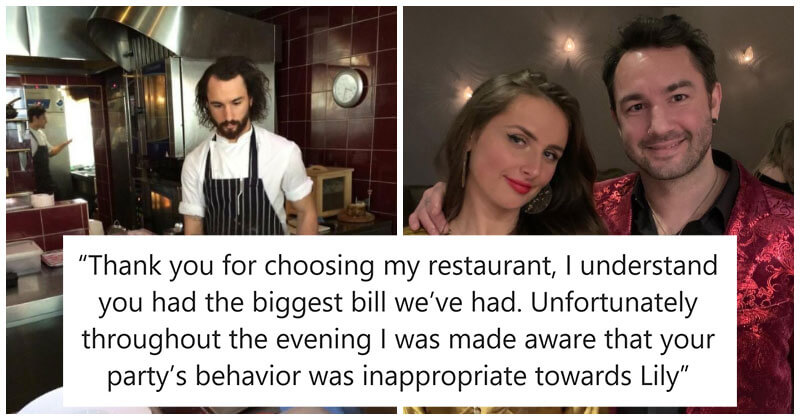 Why customer is considered a king in business? Simply put, customers play a central role in improving corporate activities because they can tell top leadership what’s good or bad in operating processes. Customers, in other words, can make or break your business. For example, in profitability, customers help firms generate profits, the economic fuel needed to run a thriving business.

As a result, businesses put a lot of effort into customer service. Whatever customers say or do, they are always right. However, occasionally, the business owners can no longer stand their clients because of their nasty behavior. Take this case for example. The owner and chef of a restaurant showed his rich patrons the door because they spoke down to and mistreated his employee. Scroll down to check out the entire story.

You can’t choose your clients, but you can certainly kick them out if they’re causing you problems, as Chef Lee Skeet did. Meet Lee Skeet, the owner and chef of the Cora restaurant in Cardiff, United Kingdom, who recently recounted how he dealt with some unruly clients at his restaurant.

As he said, a group of wealthy patrons visited his restaurant and left with a bill of £1,100 (about $1,350). Their patronage, not the bill, was the issue.

According to Skeet, they are particularly obnoxious. He claimed in his Twitter and Instagram post, which was actually his e-mail to said customers, that a 22-year-old front-of-house worker called Lily was spoken down to, mistreated, and groped against her will by this group of people.

In his tweet, he recounted how he taught the nasty client a lesson by banning them and handing their money to the 22-year-old front-of-house employee The group’s actions were unacceptable, according to Skeet, since they spoke down to the employee, showed contempt, and groped her against her consent. He considered returning some of the money but instead decided to give Lily the entire sum as appropriate compensation. He concluded that the clients should never return to the restaurant after talking with her extensively. He also intended to send them their money back after deducting approximately 10% of the price, or £100, as a well-deserved tip for Lily, but he ended up paying her the entire £1,100 bill.

In his reply to the client, Skeet continued, “I also think you should assess the people you surround yourself with.” The letter quickly made its way onto the aforementioned social media platforms, where it received a lot of attention.

Skeet’s message quickly went viral, garnering not just further media attention but also praise for sticking up for his teammate and establishing a positive example for other restaurant managers.

He also expressed his admiration for Lily. She kept up a high level of class and integrity in a follow-up post. Skeet went on to say how proud he is of Lily for maintaining a high degree of class and integrity.

Ince, a London-based legal firm, has launched an investigation after the restaurant’s owner’s complaint, and because the meal was attended by the company’s senior executives, there’s a chance they’ll receive their due desserts. Because the inquiry is still underway, the legal firm has made no more remarks.

Skeet’s decision received widespread support online, and many people shared their opinions on the matter People Are Sharing Funny Photos With The Statues

19 Things We Hyped That Completely Flopped

When Delivery Drivers’ Left-Hand Job Is Photographer, Their “Proof Of Delivery” Snaps Are Hilarious

21 Odd And Hilarious Designs That Will Brighten Up Your Day