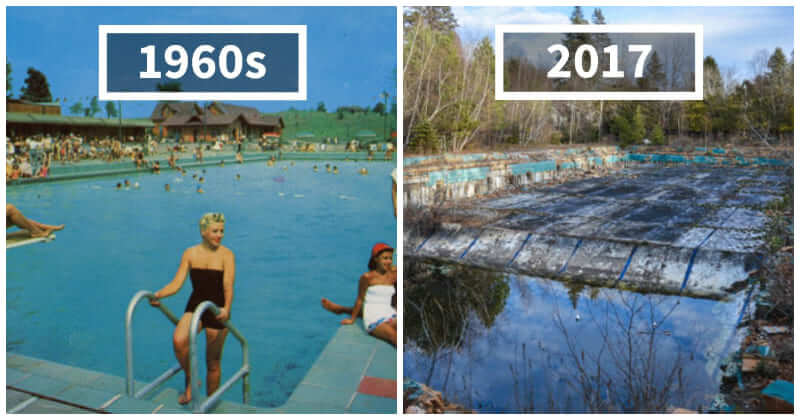 People, those who love traveling, can’t help but stop somewhere along the line, during the journeys to grab some postcards and stamps and whip out quick greetings to loved ones back home. However, have you ever wondered how the famous landmarks imprinted on postcards look now? With the concern with that question, Pablo Iglesias Maurer, an extremely talented photographer, came up with the idea of making an amazing photo series called ‘Abandoned States.’

He ordered more 60s photo postcards from eBay and started going around the country, capturing these once-magnificent buildings from old photos that now stand abandoned place at roughly the same spot. In this collection, Pablo has shown us how much they have changed, and the difference is unbelievable. Scroll down to check out the incredible series of before and after pics below! The Homowack Lodge now sits abandoned on the southern edge of the famed “Borscht Belt.” On its lower level, maybe the highlight of the place, is a four-lane Brunswick bowling alley. It has seen better days. The browns and reds and oranges of this Poconos dining hall’s carpet have turned green, the color of the moss that’s taken its place. Grossinger’s indoor tennis center. The rear of the postcard is an ad for Grossinger’s rye bread, a local staple during the resort’s operation. More of the indoor pool at Grossinger’s. The tiled floor was heated, the entire structure air-conditioned. Sunbathing and swimming in the Poconos. Postmarked, 1967. “Dear Jonnie: If you were only here, I would take you out for a horseback ride – or else we could go golfing. Be good until I see you. Dr. Waterman.”

Discover Internet Habits Of A Libra Through 15 Hilarious Memes

Unusual And Fascinating Maps That Will Surprise You About The World

Sagittarius And Their Money Habits…Don’t Miss Them

Capture Hilarious Moments Of A Gemini When Drunk