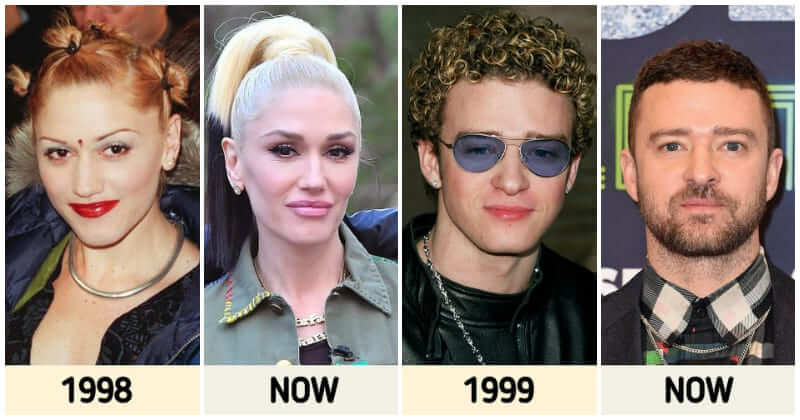 If you are browsing YouTube, you will properly see someone comment about how the past always has the best music. Periodt! Followed by a string of comments wishing for the current music scene to return to that once upon a time.

Just because the infantile Gen Z might scowl, frown or roll their eyes at these comments doesn’t make it any less true. The noughties is one of the best eras of music. Each era has its own champion: for the 80s, it’s disco dancing queens. The 90s saw the rise of hip-hop and R&B crooners. The ’00s would be dance-pop, R&B, and alternative rock artists. And country singers rule all eras, essentially.

The nostalgia is real with music. Music videos from this time still rake in millions of views; with an equally lively and appreciative comment section. But that doesn’t mean the artists themselves haven’t changed.

Don’t believe us? Here are 18 chart-topping artists who look completely different now, compared to the noughties. Hilary Duff was Disney Channel’s golden child. And she also set the standard for future Disney stars. That means having a career in both acting and singing. As one of the best-selling Disney stars, she has sold an estimated 15 million records worldwide.

Surprisingly, Hilary still looks like her Disney days. And she is the mother of three nowadays! She recently posed nude in magazines and talked proudly about body positivity. The baritone of the legendary boy band N’SYNC, Joey Fatone was once the dream boy for many millennial teenage girls. He has sold over 70 million records worldwide.

Now in his 40s, Joey’s ever-present happy-go-lucky face is still there. He is still active in the entertainment industry, participating in Dancing with the Stars, Family Feud, and The Masked Singer. The breakout star from N’SYNC, Justin Timberlake has crafted quite a career for himself. A triple threat: singer, dancer, and actor, Justin is also a famous music producer.

Now in his 40s, Justin has kept his hair shaven, forgoing the curly blond hair he has in N’SYNC. He is also happily in marriage to actress Jessica Biel, and has a son with her, Silas. The other lead singer in N’SYNC, JC soulful croons carried the weight of the majority of N’SYNC hits and sings just as much as Justin. It has been almost 20 years since his heyday, and he looks just as good.

The teen heartthrob might not have a huge career like his breakout bandmate, but he does just fine. With his name as credit as production, JC Chasez has produced for Girls Aloud, Sugababes, and David Archuleta. Fergie first achieved success as the bombshell singer in the hip-hop group Black Eyed Peas. The group earns multiple chart-topping hits like My Hump, Pump It, and I Gotta Feeling.

She has then gone solo, with 2 albums under her belt, and her mega-hits Glamourous, Clumsy and Big Girl Don’t Cry are still some of her best work today. Mariah Carey no longer looks like her 1990s self. But nobody is complaining. The diva is still just as beautiful, even in her 50s. Plus, her pipes are still as good as it was 30 years ago.

One of the biggest divas of all time, Mariah Carey has sold over 220 million records worldwide. Nineteen of her tracks have charted at the top of the Billboard Hot 100. We are still straining trying to sing her signature songs like “My All”, “Hero” and “We Belong Together.” Who doesn’t know Celine Dion? One of the most vocally-gift divas of our time, Celine has a lot of hits like To Love You More, and It’s All Coming Back To Me Now, but her most famous will always be the Titanic soundtrack “I Will Always Love You”.

Celine now has her own Las Vegas residency shows, whose tickets still sell out for every show she performs at. One-fourth of the Pop Princess quartet of the noughties, Jessica Simpson has 6 successful albums, before turning her career into entrepreneurship.

During the early 2000s, Jessica is pretty hot; enough to give her competitors Britney, Christina, and Mandy a run for their money. Now in her 40s, Jessica is both successful and happy, and she radiates this every time we see her. The mold for all the alternative chicks out there, Alanis Morissette has sold more than 75 million records worldwide and was dubbed the “Queen of Alt-Rock Angst” by Rolling Stone. Her hits include “Uninvited”, “Thank U” and “Hands Clean.”

Alanis Morissette looks unrecognizable now a day. But nonetheless glamorous. And only a few days older. The singer from No Doubt, Gwen Stefani, also looks a world apart from her early 2000s days. No Doubt fans will remember Gwen as a very alternative-looking girl, with a strange hairstyle and audacious style.

The now-Gwen is quite different, going from quirky to fashion icon. Gwen also has a very successful solo career, with chart-toppers like Hollaback Girl, Misery, and The Sweet Escape. Forever the funniest girl on Earth, Cyndi Lauper is still touring today, despite being close to 70! Cindy still embraces her iconic look today, with various hair colors and eccentric clothing.

With over 50 million records worldwide, Cindy is a staple in pop culture. Her hits include the timeless “Girls Just Want to Have Fun”, “Time After Time”, and “I Drove All Night.” The forever iconic American Idol trinity, Paula Abdul is the dancing queen ò the 90s. The talented singer started out as Janet Jackson’s choreographer and is responsible for many of Janet’s iconic performances.

Even now, we are still dancing to her hits like “Straight Up”, “Cold-Hearted Snake” and “Will You Marry Me?” Do you know that Paula choreographs most of her music videos? The owner of the smash hits “Promiscuous”, “Maneater”, and “Say It Right”, the Canadian songstress used to be the crush for many teenage boys during the summer of ‘06.

She is now the mother of one, but Nelly Furtado still looks as stunning as ever. And her music has never been better, as Nelly has embraced both her Canadian and Latina heritage and showing them off in her music. Natalie Imbruglia is not a very familiar name, but her super hit “Torn” is. As of right now, Torn has gained over 247 million views.

“Torn” will forever be that song where we pretend to weep over salvaging a broken relationship. Natalie is still making music, with her album Firebird released in 2021. The real Slim Shady looks so different compared to his younger day. But that’s not because he is older. Eminem is in his 50s now, so the blond hair has darkened quite a bit.

One of the most famous and successful rappers of all time, the Rap God rapper has a very prolific career, with ten number-one albums on the Billboard 200, and estimated worldwide sales of over 220 million records. The first winner of American Idol, Kelly Clarkson has a big voice, matched only by her giant collection of hits. This includes “Since You Been Gone”, “My Life Would Suck Without You”, and “Never Again”.

It has been 20 years since she first appeared on TV, Kelly Clarkson is no longer a 20-years-old hopeful. But she is looking healthier and happier than ever. A member of the best-selling quintets of all time, Backstreet Boys, Nick Carter has a beautiful voice and a beautiful face to match. And hair. And body.

Now in his 40s, Nick Carter doesn’t have the pretty boyish look he used to have, but he ages like fine wine. As a member of the BSB, Nick has sold over 100 million records worldwide. If you wonder how he used to look, just watch older BSB’s music videos like “I Want It That Way”, “Everybody”, and “As Long As You Love Me.” Nick Carter’s little brother, and the mischievous kid in Home Alone series, Aaron Carter is nothing like the small kid he used to be. He is now in his 30s, after all.

Back in the early 2000s, Aaron Carter was quite a teen idol. He has four studio albums, and dominated the radio with songs like “I Want Candy”, “Aaron’s Party (Come Get It)”, and “That’s How I Beat Shaq.”

9 Pairs of Oscar-Nominated Actors Who Portrayed The Same Characters