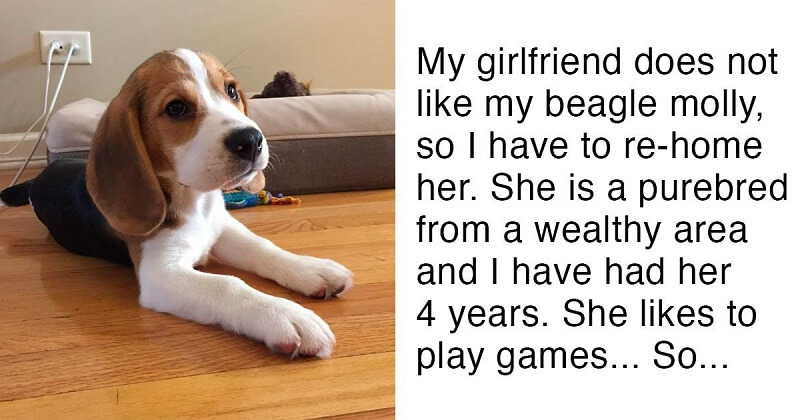 If you have ended a relationship because your partner didn’t love your pets, you’re not alone. Many people decided to choose their pets over their partners. Take the case of one man from Roanoke, Virginia, and his girlfriend for instance. His girlfriend gave him an ultimatum and made him choose her and his dog, and his choice took the Internet by storm. Scroll down to read the full story!

The guy and his girlfriend recently discussed moving in and living together, but there was a problem. His girlfriend hated his dog Molly and she refused to live with him until he got rid of his dog. The man had never been faced with this situation before, but luckily, he made the right choice. He decided to seek a new home for his selfish girlfriend instead of living with her and removing his beloved dog. The guy wrote a hilarious ad and placed it in the “Community/pet” section of the website: “My girlfriend does not like my beagle Molly. SO I have to rehome her,” he wrote. “She is a purebred from a wealthy area and I have had her 4 years. She likes to play games. Not totally trained. Has long hair so she’s a little high maintenance, especially the nails, but she loves having them done.”

“Stays up all night yapping but sleeps while I work. Only eats the best, most expensive food,” he continues. “Will NEVER greet you at the door after a long day or give you unconditional love when you’re down. Does not bite but she can be mean as hell! So… anyone interested in my 30-year-old, selfish, wicked, gold-digging girlfriend?” he asks. “Come and get her! Me and my dog want her re-homed ASAP!!” At first, readers thought he described Molly, but they soon learned that he was talking about his girlfriend. And of course, no one wants to “adopt” her.

“The dog should not be the one leaving. She’s your child not just a dog. The trauma you do to that baby is cruel and despicable. Girlfriends come and go but baby’s stay forever,” wrote one person in the comments on Happiest. “I give you six months with the girlfriend what are you going to feel like then about giving up your baby. It shows who will wear the pants in your life. If she can’t accept you and your baby you need to think twice before you continue a relationship with someone so cruel.”

We still can’t understand how she could ask her boyfriend to get rid of his dog. What a selfish girl! We hope that he and Molly find a new girlfriend soon!