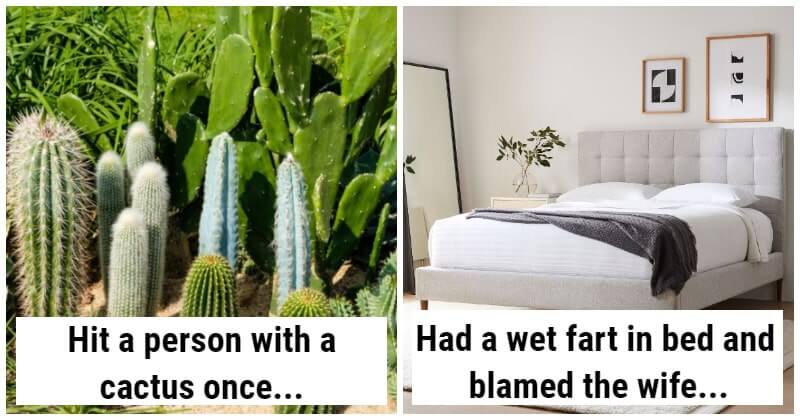 There are always people who are just so eager to seek revenge on others. The means by which they revenge, though, could speak volumes about their inner rage and pure insanity. If what recently happened between Johnny Depp and Amber Heard taught us anything, then it is to never underestimate a person’s rage in any circumstances.

Here are 20 craziest ways that people got their revenge that are going to make you cautious about your words and actions. One day, you will get revenged on. And that day will be, so very sad for you.

#1 I shitted the bed and blamed the dog #2 Was bullied by a kid a lot in 6th grade. I met his older sister at a bar when I was 21 and slept with her. didn’t rub it in his face since I never talked to him after 6th grade, but I’m sure he knows #3 I made an entire bar break out in a brawl because I ate a bag of chips. No joke.Three guys were verbally harassing me in a small-town dive bar. This woman comes in from a smoke and yells to the bartender “give me a bag of chips!” on her way to the bathroom.He sets them down at her seat next to me. I inhale these chips and carefully slide them near the guys when they aren’t looking.She comes out, sees the bag and starts getting in their faces. Her husband sees the commotion and gets involved and fists start flying.I ducked out as the husband entered

#4 Hit a person with a cactus once… #5 Got my Christian school bully’s parents divorced.I forget what TGIF show I lifted the bit from but when I met the kids mom I said “then who was that lady your dad kissed?”.Which set off a chain reaction that eventually led to their divorce that very year.I was just trying to be a smart aleck but I got a natural 20 and shit just sorta happened

#6 Had a wet fart in bed and blamed the wife #8 Eat a nature valley bar in their bed #9 Old landlord wouldn’t give me back my deposit that I felt should have been given back. Went back in one last time, removed a wall light switch cover, broke a hole in the electrical box and poured a bag of sugar into the wall.Put the switch cover back on and left. They fought roaches and bugs for months.It’s the little things that help me get through life #10 They were looking for something, and I knew where it was. So I moved it somewhere they’d never look lol #11 I hit a bully on the head with a shovel on the beach after he threatened to beat me up.Next week (after going to the hospital) he wasn’t a bully but actually kind of nice towards me

#12 Walking away and living rent-free in their head #13 It’s not really revenge so much as karma, but my ex who cheated on me with another woman found out that she was lying to him about who she was…Apparently, she was married, had 3 kids, didn’t look like her photos, had a different job than what she said etc. basically had been catfishing him lolI didn’t have much empathy for him and I said “yeah it sucks being lied to and trusting someone to be who they claim to be, being lead on and have the values they claim to have etc” #16 My ex got with my best friend, so I started talking to him again, getting with him, got to the point where we were close to getting into a relationship, then got with one of his friends #19 Had a fight in school with a guy because im close friends with his girl. F–ked her on the weekend 15 Funny And Weird Moments Spotted During A Flight

16 Dramatic Photos That You Can Actually Hear The Crying

23 Photos That Will Absolutely Shatter Your Belief In Humanity

There Is Always A Hidden Boy In Every Man, And These 22 Funny Pics Can Prove That

21 Elderly People Who Are Incredibly Strong And Cool

These People Proved That They Won’t Trust Technology Anymore!

Picky Eater Insisted On Having Food Delivered To Hibachi Restaurant, Embarrassing Their Parents