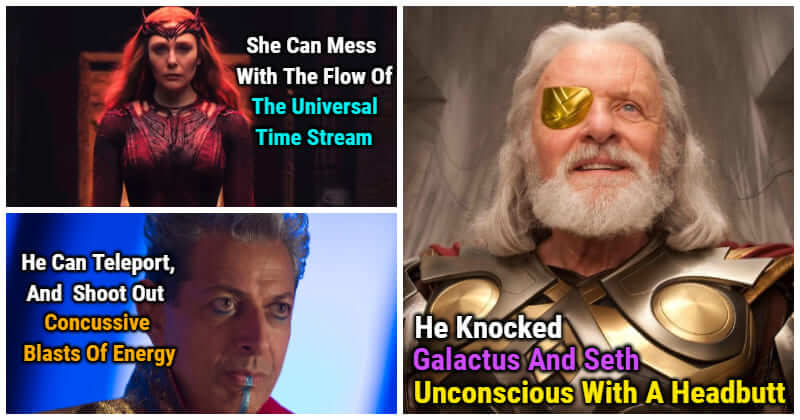 Marvel had to tone down some of its heroes and villains from their comic book forms in order to bring them to the big screen. After all, comic books and movies are two distinct mediums with distinct strengths and shortcomings. Some superheroes and supervillains transition more faithfully than others, and some characters are more easily scaled down to match the Marvel Cinematic Universe’s structure.

Characters like the Mandarin have had their powers drastically reduced. Others, on the other hand, appear to have been drastically reduced to match the needs of individual films, such as Scarlet Witch can mess with the flow of the Universal Time Stream. And below are the 13 Marvel characters who are more powerful in the comics. Marvel Comics’ Odin is a formidable character. With a headbutt, he knocked Galactus out, and the energy from his battle with Seth destroyed galaxies. We’re talking about massive amounts of power. Scarlet Witch from Marvel Comics is a unique character. You know a character is special when they can change the entire fabric of reality like she did in House of M. She’s known as Earth-616’s “Nexus Being,” which means she has the ability to disrupt the Universal Time Stream’s flow. So, she’s a formidable opponent. One of the Elders of the Universe is Marvel Comics’ Grandmaster. The man has had a lot of time to develop a laundry list of skills as an immortal endowed with the Power Primordial. He possesses superhuman strength and speed, as well as telepathy, the ability to teleport, and the ability to fire concussive energy blasts. He’s not joking around. The Hulk of Marvel Comics has no true limit to his strength; the angrier he becomes, the stronger he becomes. When you combine that with the fact that he is immortal, you get one of Earth-616’s most powerful characters. Gamora is known as the “Most Dangerous Woman in the Universe” in Marvel Comics, which says a lot considering the other characters who live there. Gamora is a formidable opponent, possessing improved speed, strength, and durability, as well as regenerative healing abilities similar to Wolverine and Deadpool. In the Infinity Wars crossover, she proved how capable she is by collecting all of the Infinity Stones. In comparison to his cinematic counterpart, Marvel Comics’ Ulysses Klaue is significantly different. He is no longer human and is entirely composed of “solid sound,” making him nearly indestructible. He can’t be killed because he doesn’t need to eat, drink, or sleep. He’s also quite quick, but there’s more to him than that. Pietro Maximoff possesses super-durable bones, can lift over 1,000 pounds, and has super-high stamina, as his body creates “almost no weariness poisons,” according to 2009’s Official Handbook of the Marvel Universe A-Z #9. The comics version of Ronan the Accuser can supposedly lift 80 tons while wearing his Kree Combat Armor, according to the Official Handbook of the Marvel Universe #9 from 1983. Ronan can also build micro-level pocket universes to capture his adversaries when the Black Vortex unlocked his “cosmic potential” in 2015’s Guardians Team-Up #3. In addition to being a skilled swordsman, marksman, and military tactician, von Strucker was infected with the Deathspore Virus, which instead of killing him granted him superhuman abilities. He can now expel the virus from his body, has regenerative healing abilities, and is impervious to all but the most severe injuries. Malekith the Accursed is a ruthless Dark Elf with superhuman speed and strength, as well as a variety of magical abilities. When you combine extreme speed and strength with abilities like teleportation and concussive energy blasts, you get one scary villain. Zemo is a great tactician and superb combatant who has demonstrated he can go mano-a-mano with Steve Rogers on several occasions. He is one of Captain America’s most powerful enemies. He can fight with a variety of weaponry and gets to wear one of Marvel Comics’ strangest outfits. Since the mid-1960s, Volstagg, Fandral, and Hogun have been supporting characters in Thor-based comic books. They’ve proven to be quite capable warriors when needed and are three of the best fighters Asgard has ever seen, while also serving as comic relief in this medium. Would you guess that based on their brief appearances in the MCU? Yondu can lift up to 875 pounds and has superior speed, durability, agility, and reflexes than a regular person, according to the 2010 Official Handbook of the Marvel Universe A-Z Update #3. He also has considerably better senses of smell and hearing than humans.