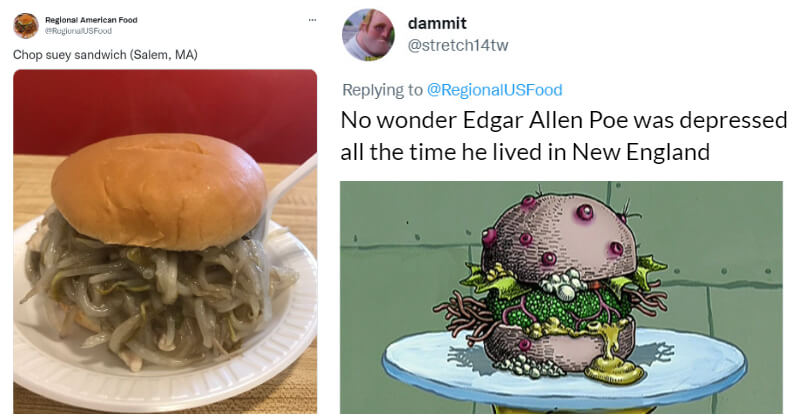 Food is heavenly. Food is miraculous. Not only can food keep us alive, but it also helps us reduce stress, fight boredom, and ease anger. But, food, like everything else, has this and that. While some are universal and favored by people around the world, others are lesser-known and may even be somewhat weird to look at. Yes, here we’re talking about regional delicacies. Something that looks and tastes totally normal to some but not so much to all others.

Have you heard about Australia’s Vegemite, a dark brown savory spread? Or Japanese’s pungent, gooey mess of natto – a fermented soybean dish? If yes, then today we’d like to present to you another dish that may take away your appetite all at once. When posted on the internet, it caused quite a stir with its questionable, nasty appearance. Behold, the chop suey sandwiches of New England!!

#1 Now, take a look at this cursed “chop suey sandwich.” It’s interesting that it came from Salem #2 Well, we all ridicule British food from time to time, but look at this #4 What’s that mussy, slimy they had in between those buns? #10 I would rather die of hunger 13 Country Traditions That Are Completely Weird To All Other Countries

Awesome Librarian Humor That Is Too Good Not To Share

Crazy Disturbing Things People Do To Gain Attention On The Internet

30 Of The Most Brilliant Comebacks That Hit Like A Truck

10+ Photos Shows Why Aquarius Boys Are Still Single, And They Are Hilarious

20 People Who Definitely Regretted Every Decision They Made

20 Pics Of Poor Design That Are Disasters Waiting To Happen

Surprisingly, People Can Do These Things Legally

Some Of The Worst Logo Design Fails, As Pointed Out In This Twitter Thread

This Man Is A True Genius, Automates Job And Gets Paid For Doing Nothing For 5 Years