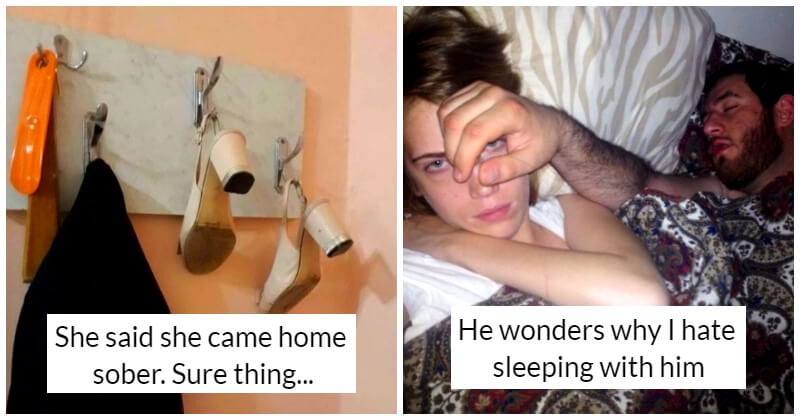 Being in a romantic relationship, we all want to spend all days and nights with one another. Weekend dates are practically not enough. We want to be together all the time if it’s possible. Yes, who wouldn’t fantasize about waking up in the morning seeing their significant other lying by their side? That feeling will be so great. Well, that’s the difference between living alone and living with your SO. No wonder why people always rush to move in together.

But, wait a second. We need to take everything into account before making such an important decision like that. We’re not being pessimistic, just that living together is not easy. You may find out that your BF/GF has bad sleeping habits or they never do the dishes until the sink is full. Of course, it’s not always like that. Sometimes it’s more like all the silly, annoying things they did just make their partner love them even more, like the couples below. They shared with us the most honest reviews about their life with SO, and it’s hilarious.

#1 The Mountain with his girlfriend and dog #2 I was putting away laundry. I can’t believe what I found at the bottom of my wife’s underwear drawer #3 Fiancée said she needed an iPad for work purposes. Her fingerprints prove otherwise… #4 How to scare your wife on Halloween: print your face on paper, put the paper in a jar, fill the jar with green water #5 I just caught my boyfriend in the act. He doesn’t know that I know his secret #6 He wonders why I hate sleeping with him #7 My wife and I painted each other’s faces. Apparently, I took the challenge more seriously than she did #8 My boyfriend just put Coke in with his cereal. How soon should I break up with him? #11 My boyfriend wanted to cut my cat’s hair once and totally messed up. It’s so sad but a little funny at the same time. (She always looks pissed, so it is probably not because of the weird hairdo) #12 She said she came home sober. Sure thing… #13 My fiancé didn’t want to dress up for Halloween this year, so I did the next best thing #15 Thanks to our toaster oven, we now have matching husband and wife scars for life #16 My girlfriend was eating snow off the hood of my car, and I jokingly pushed her head down…this was the result #17 My girlfriend does her hair like this every morning #18 I made an adult pillow fort for my girlfriend yesterday #19 When your girlfriend ‘really loves you’… #21 My wife is about to chop onions #23 I’ve heard of painting yourself into a corner, but my wife took it a step further. I don’t even know… #24 Bought the girlfriend a new camera lens for Christmas. This is my life now Funny 20 Gifts From Grandmother That Contain Love Within Them

20 Advertising Placement Fails That Turn Out An Unexpected Win

27 Technically True Things That No One Dares To Argue With

Parents Shared Hilarious Stories About How Their Children Had Outsmarted Them

20 Weird Panoramic Photos That Will Crack You Up

Funny Male Fashion Dos, Don’ts, And “Please Don’ts”, As Shared By This Artist

20 Funniest Shadows That Will Make You Doubt Your Own Eyes

20 Food Combinations That Seem Weird But They Are Actually Delicious

15 Hilarious Lost and Found Signs That Are Way Too Accurate

Crazy People Who Cheated Death And Lived To Tell It

25 Crappy Designs That Are Far Too Good At Being Bad