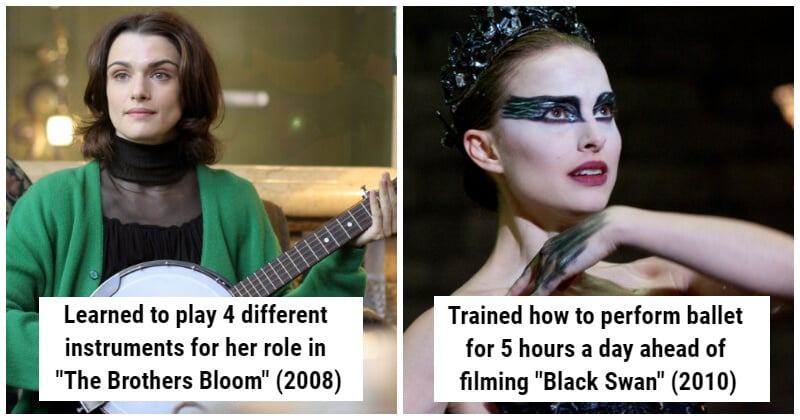 Did you know that actors don’t just focus on acting alone? You may be surprised to know how much crazy and intense hardship actors have to go through to convince a role, including learning a new skill.

In most movies, some roles will require a specific skill set. This is why actors will have to learn these skills in order to play their characters at their peak performance. Some are easy to learn, whiles others take months of constant practicing in order to achieve the level required.

I mean, for sure, the crew can hire a stunt double, but some actors see it as a chance to learn new things that they have yet to acquire. Even though they understand that learning these skills does not necessarily mean they would win an Oscar, they’re still fully committed to the end.

Below are 12 talented actors who have dedicated their time and efforts to achieve such an admirable goal.

#1 Natalie Portman trained how to perform ballet for 5 hours a day ahead of filming Black Swan. As the actress admits, she underestimated her own ballet abilities when she was originally cast in Black Swan. She assumed she could pull it off because she had some past experience as a child, but that was not the case. To compensate for her lack of recent training, she practiced for at least 5 hours every day in her spare time. Her efforts were rewarded with an Oscar nomination for her performance.

#2 Jesse Eisenberg learned the fundamentals of magic for Now You See Me. Jesse Eisenberg played a magician in the 2013 film Now You See Me, and he really learned the fundamentals of magic for the part. The performer claimed he found the knowledge he gained highly valuable while doing a variety of stunts, not only magic-related ones.

#3 Joseph Gordon-Levitt learned how to walk the high wire for The Walk. Not only did the actor learn to walk the tightrope in just eight days for his film The Walk, but he was also trained by Philippe Petit, the guy he played in the film. In fact, Petit insisted on being the one to teach Gordon-Levitt that expertise, and while the 8-day deadline looked a tad ambitious for the actor, he pulled it off against all odds. To fulfill their roles in the film Point Break, the whole ensemble had to learn how to surf. According to Dennis Jarvis, the actor-surfer who taught the cast how to surf, Keanu Reeves “certainly hadn’t surfed” before taking on the part. He aced the training, though, and enjoyed surfing so much that Jarvis made him a bespoke board, so Reeves could surf off-screen as well. Since Green Book is a movie about a musician named Donald Shirley, it was always the plan to have the lead actor learn how to play the piano. Mahershala Ali, who got the role, showed incredible dedication to the process of learning — the composer who trained him recalls that they were supposed to practice for 1 hour during one of the first sessions, but ended up staying for 3, as the actor wanted to make sure he had everything correct. By the end of the lessons, he learned how to play a few melodies.

#6 Tom Cruise with 2,000 hours of learning how to fly a plane just for one scene in Mission Impossible: Fallout. Tom Cruise is known for performing his own stunts, and flying an airplane in the sixth edition of the Mission Impossible film series was no exception. Pilots typically need to practice 8 hours a day for 3 months to become beginner pilots, according to the aerial assistant who instructed him, but Cruise did everything he could to catch up rapidly and amass 2,000 flying hours in a short period. Not only that, but he learned how to do one of the most difficult moves, a corkscrew dive.

#7 Rachel Weisz learned how to play 4 different instruments for just one role. Rachel Weisz’s role in The Brothers Bloom required her to play the accordion, banjo, violin, and guitar, thus she had to master all four instruments. Because the film was shot in Serbia, Weisz had to take accordion lessons from a Serbian teacher who spoke no English; there was also some difficulty with the language barrier. The actress taught herself how to play the other instruments by spending hours mastering the chords. Chef, the 2014 film starring Jon Favreau, was written and directed by him, although he stated that he “would make the film only provided it looked totally true.” That’s why he learned how to cook professionally from the proprietor of a food truck. It was a difficulty since, according to the actor, when you’re working in real-life situations, nobody cares if you’re a rookie, and have to learn a lot of stuff on the fly.

#9 Kate Winslet learned how to free-dive for Avatar 2. While Avatar 2 has yet to be published, there are a few known facts about the film, one of which is that Kate Winslet not only learned how to free-dive for it, but she also learned how to hold her breath underwater for more than 7 minutes.

#10 Ryan Gosling learned how to build furniture for his role in The Notebook. Ryan Gosling demonstrated yet again that he is a method actor by learning how to build furniture from the ground up, exactly like his character, Noah, in The Notebook. The actor made friends with a local cabinetmaker, and together they manufactured the Adirondack chairs seen in the film. The actor also made a table, which was utilized as a prop in the film.

#11 Riz Ahmed learned American Sign Language for his role in Sound of Metal. Riz Ahmed’s character in Sound of Metal gradually loses his hearing, so the actor spent 7 months learning American Sign Language to prepare for the part. He stated that he attempted to become near-fluent in ASL out of respect for the community. Ahmed further mentioned that his ASL coach and the deaf community assisted him in understanding the true meaning of listening and conversing.

#12 Margot Robbie learned to mimic an Olympian-level figure skater for I, Tonya. Margot Robbie’s skating teacher in I, Tonya stated that it’s difficult to start skating from scratch, especially when you just have a few weeks before filming. Fortunately, the actress had a strong work ethic and was able to pull it off – she rehearsed four days a week for three months before the filming.