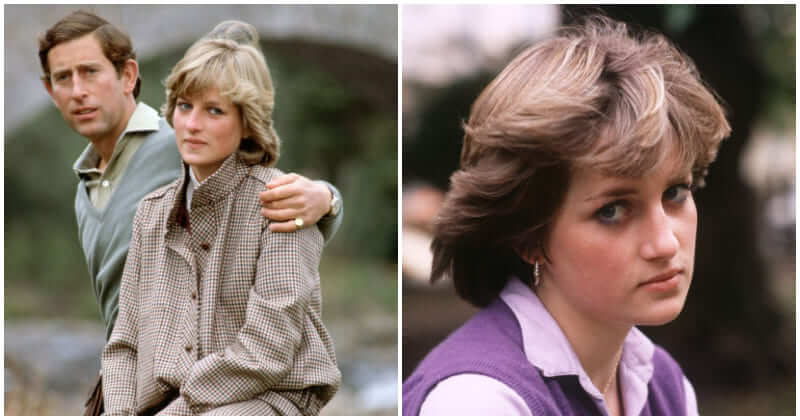 But we also remember Princess Diana for her unhappy marriage to Prince Charles. The tumultuous marriage was and still is, the subject of global tabloids. Trapped in a loveless marriage, love affairs, and with so many differences, the royal pair quickly become a royal pain for all parties involved.

Despite that, during their 15 years together, Princess Di has always shown a radiant facade to the public. Almost always; there are still moment when her perfect public persona shows some cracks. So, here are 15 moments in Princess Diana’s 15 years of marriage where her true pain peaks.

#1 The cold shoulder from her soon-to-be husband Upon their engagement, Prince Charles was asked whether he loves Princess Diana. To which he replies nonchalantly: “Whatever love means.” This contradicts Diana, who sees marriage should be for people who are in love with each other. The frostiness just seeps through the Prince’s hand in this shot, doesn’t it? Before the wedding, Princess Diana found the infamous bracelet that Prince Charles has planned to give Camilla Parker-Bowles. She almost canceled the wedding, but her sister convinced her to go on. Princess Di confessed to searching for the other woman in the crowd of her wedding attendees.

#3 After her royal engagement, princess Diana struggled with the intense media attention Taken at the kindergarten she worked at when she got engaged to Prince Charles, this shot shows Diana bursting into tears while sitting at the wheel of her car. “I know it’s just a job they have to do, but sometimes I do wish they wouldn’t,” she tearfully recounted. Diana’s condition was so intense that she would wake up in the morning with no desire to get out of bed. Instead of encouraging her, her spouse labeled her “unstable,” a debilitating label that would stick with her for years.

#5 The tour was tasking for Princess Diana Even her exquisite cream silk organza gown did not appear to delight the princess at the time. Diana looked exhausted. The difference between the marriage pair is world-apart. Princess Di just can’t find any interest in the subject her husband loves, and vice-versa. Worse, she found photos of Camilla in Charles’ diaries. Even noticed that the Prince was wearing cuff links with their initials.

#7 The exhausting day before the announcement of the pregnancy Diana had worn a pale blue chiffon gown to a gala concert at the Victoria and Albert Museum the day before, and photographers had captured her fatigued expression.

#8 In 1986, the royal couple start seeking romance, from other people In 1986, Prince Charles admitted to his biographer that he rekindled his connection with Camilla Parker-Bowles. At the same time, Princess Diana began an affair with Captain James Hewitt.

#9 The banquet in New Zealand shows the tired couple Lady Di had red, puffy eyes and a worn-out expression as if she had been sobbing the night before. Her husband’s jealously, as well as mounting anxiety and a recurring eating disorder, appear to have been the cause.

#10 The international tour of 1983 implodes their marriage During this tour, Prince Charles learned for the first time that the people preferred his young and beautiful bride over him. Diana, on the other hand, was unable to quell her husband’s jealousy or retreat into the background of people’s hearts. In this hot, they both appeared so miserable that the British press dubbed them “the Glums.” The divorce of the Prince and Princess of Wales was announced in the House of Commons by Prime Minister John Major in December of the same year.

#12 When they were counting down to the inevitable split This photograph was shot just before Queen Elizabeth’s speech, in which she stated that 1992 had been a dreadful year for her, after the divorce of her three children. Diana and Charles both appear distraught, avoiding seeing each other in the eyes and tilting their heads in various directions.

#13 The tension between the royal pair was palpitating The shot is taken during their tour of Canada. Charles looks down dejectedly, while Diana steely stares forward. If met, their eyes would probably exchange stone-cold stares, oblivious to each other.

#14 After the divorce, Princess Diana relinquish her right to become the Queen of England, but still remain in the spotlight Working with others has become a new focus for her by 1977. She helped those affected by leprosy, HIV, and antipersonnel mines. She studied public speaking and hoped to use her celebrity to improve society.

#15 The smile of relief after the divorce was finalized Journalists caught Lady Di’s first public appearance following the divorce. It is well known that the princess sought to salvage the marriage until the very last moment. The snapshot above displays her ability to remain positive and adjust to her new position.

15+ Fans’ Hypotheses About MCU Villians That Are Sensible